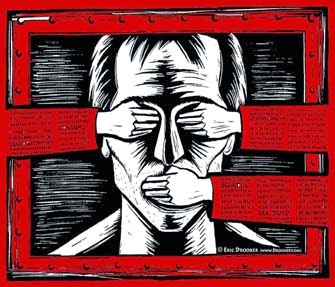 Legal Schnauzer Publisher Roger Shuler has been released from five months in the Shelby County Jail, but numerous legal issues remain from his incarceration. No. 1 on the list probably is censorship, and a long line of court cases points in that direction.

Loyal readers have helped sustain this blog during a traumatic time, and we invite your financial support to help continue the battle. Donations can be made by clicking on the donate button to the right.

Shuler was incarcerated because of a civil-contempt charged based on a preliminary injunction in a defamation lawsuit. But American law long has held that such injunctions constitute an unlawful prior restraint and are forbidden under the First Amendment.

This is perhaps most strongly stated in Near v. Minnesota, a ground-breaking 1931 case on the subject of free-speech restrictions. From the opinion of Chief Justice C.J. Hughes in the Near case, addressing a Minnesota "anti defamation" statute and the issue of contempt:

If we cut through mere details of procedure, the operation and effect of the statute, in substance, is that public authorities may bring the owner or publisher of a newspaper or periodical before a judge upon a charge of conducting a business of publishing scandalous and defamatory matter -- in particular, that the matter consists of charges against public officers of official dereliction -- and, unless the owner or publisher is able and disposed to bring competent evidence to satisfy the judge that the charges are true and are published with good motives and for justifiable ends, his newspaper or periodical is suppressed and further publication is made punishable as a contempt. This is of the essence of censorship.


To anyone who has followed my case, those words from 1931 should be particularly chilling.

While considering NEAR VS. MINNESOTA; you may want to take a closer look at the U.S. SUPREME COURT decision INVOLVING NEW YORK TIMES VS. [ALABAMA] SULLIVAN CASE HISTORY:
"set a new national standard for uninhibited robust and wide open" discussion on matters of public concern and on the performance and conduct of public officials. Some say the ruling effectively provided a second ratification of the First Amendment's protection of the freedoms of speech and press.
Justice William Brennan, Jr. citing another case, "public discussion is a political duty...to the principle that debate on public issues should be uninhibited, robust, wide-open, and SOMETIMES UNPLEASANTLY SHARP ATTACKS ON GOVERNMENT AND PUBLIC
OFFICIALS."

Roger, remember always you have the power and strength that they all are lacking and cannot overcome involving these matters, and that one thing is very simple and basic------facts/truths!

Thank you Roger for having the courage to defy the depth of corruption and stand up for truth and justice - in all of your journalism writings. Thank you also for standing up for Jennifer Clark and supporting her family's efforts to get the truth out concerning the events of her untimely death. As you -- we will continue to fight for truth and justice in her case. We will continue to support you to the best of our ability. God Bless You and Carol. Hilda Clark

"There may come a time our involvement is not popular, is not acceptable, not understood, not given merit, and not be the safest; but will be the right thing to." ML King, Jr.

If you can ever get these people in court before a jury and let "the little people" testify, yes, how all their injustices have come as result directly indirectly thru administration's use and abuse of their equal rights because they were seen as easy prey; and because they could without fear of recall or accountability.

I have followed your blog for some time and I believed that it was an opinion that was stated and ordered to be removed.

I strongly believe that no one should ever take the internet too seriously. Blogs are for opinions. Public figures have people say horrible things about them everyday but that comes with being the limelight.

I am not a lawyer and this is not legal advice, but opinions and beliefs have stronger legal protections.

Also, journalism--which has been recognized as blogs and so forth in the Information Age, receive the same protections as the corporate and independent media.

Have you ever heard of Jones v. Dirty World Entertainment, LLC? There are similarities in that case and it has garnered a lot of media attention.

Amicus Briefs were submitted by all of the major corporations because, in my opinion, the decision could open the flood gates for litigation against those who publish and propagate defamatory statements and/or for invasion of privacy.

I am happy that you have your freedom restored. I would suggest a congressional inquiry or an investigation by the United States Department of Justice.

Every person--citizen or not--has equal protection under the laws in the United States of America. The United States Constitution is the Supreme Law of the Land and unalienable rights can only be taken away after due process has been granted and one is found guilty beyond a reasonable doubt.

Take care and good luck in all of your endeavors.