White Americans Say Racism Increasingly Is Turned in Their Direction 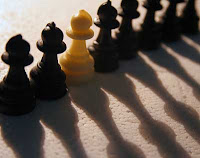 A new study finds that many Americans believe racism against whites is growing, and in some cases, even surpasses that faced by blacks.

Researchers at Harvard University and Tufts University found that 11 percent of respondents gave white racism in American a maximum rating of 10 points, according to a report in The Telegraph of London. The study, titled "Whites See Racism as a Zero-Sum Game That They Are Now Losing," was published in Perspectives on Psychological Science.

How could a significant number of Americans actually see anti-white racism as a bigger problem than racism directed toward blacks? The study explains:

Although some have heralded recent political and cultural developments as signaling the arrival of a postracial era in America, several legal and social controversies regarding ‘‘reverse racism’’ highlight Whites’ increasing concern about anti-White bias.

We show that this emerging belief reflects Whites’ view of racism as a zero-sum game, such that decreases in perceived bias against Blacks over the past six decades are associated with increases in perceived bias against Whites—a relationship not observed in Blacks’ perceptions. Moreover, these changes in Whites’ conceptions of racism are extreme enough that Whites have now come to view anti-White bias as a bigger societal problem than anti-Black bias.

That finding might draw a "WTF" response from many rational folks. But The Telegraph provides insight on the study's findings:

The study polled roughly 200 white people and 200 black people drawn at random from a national census and asked them to rate racist attitudes against blacks and whites in each decade from 1950 to 2000.

Both groups felt racism against black people was substantial in the 1950s and both groups agreed the situation had markedly improved.

However, white respondents to the survey indicated that racism is now on the rise against white people. Eleven per cent of people responding to the survey even gave anti-white racism a maximum rating of ten points.

The authors said the research showed America has not yet reached a "post-racial" era, despite the election of Barack Obama as the country's first black president.

The findings left at least one of the researchers scratching his head:

"It is a pretty surprising finding when you think of the wide range of disparities that still exist in society, most of which show black Americans with worse outcomes than whites in areas such as income, home ownership, health and employment," said Samuel Somers, an associate professor of psychology at Tufts who co-authored the study.

One expert, however, offered some insight into what might be driving the findings:

David E. Berstein, a professor of law at George Mason university, told the New York Times that the US policy of affirmative action, which sees universities and employers overtly favour black candidates over whites, had led many whites to complain about the unfairness of the system.

"It is not terribly surprising that whites subjectively perceive discrimination against members of their own group as an especially significant and growing problem, even though, objectively speaking, bias against blacks is far more pervasive, problematic and ill-intentioned," he said.

This may explain why some,not to be confused with all whites are feeling *ahem* discriminated against;

It's not a media driven stereo type! It's TRUE incidents that are reported on the news! Race relations are worse than they were 3 years ago since Obama took office! It was suppose to get better it has not!!! BLACKS now feel they don't have to follow the rules because we have a 1/2 white and a 1/2 black president! Oh why is he always refereed to as the first black president and not the first 1/2 president or first mixed president?
http://redeyesfrontpage.blogspot.com/2011/05/blast-from-past-blog-stroll-katrina.html?showComment=1306933053523#c7781203968034668071

It's the media
http://videocafe.crooksandliars.com/heather/maddow-conservatives-construct-separate-me
Rachel Maddow talked about the influence and insular nature of right-wing talk radio started by Rush Limbaugh that has now been adopted by Fox News where they sell their audience "grievance, resentment and belonging" and how that made it inevitable that we would end up with someone like Palin using avoidance of the "mainstream" media as part of a political platform.

It's the job of the right wing media to keep the bigots in line. Mission Accomplished.
http://crooksandliars.com/john-amato/what-hate-right-wing-talk-radio-blogger

I am in South Alabama and in high school I saw the black football players be favored over the whites and the black candidate beat the white candidate in Homecoming Queen. As a result, a lot of my white friends and classmates leave to go to all-white schools in farming communities north of my town. Some also end up commuting to a private school the next county over.