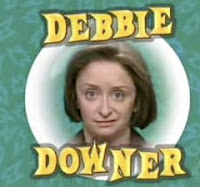 What are U.S. corporate elites receiving in exchange for their substantial investment in Karl Rove's American Crossroads? Some of the most infantile political advertising since the invention of moving pictures.

Rove's latest handiwork involves an attack on U.S. Rep. Debbie Wasserman Schultz (D-FL). How did Wasserman Schultz become a Rove target? One, she recently was elected chair of the Democratic National Committee. Two, she has spoken the obvious truth--that after eight years of corruption and misrule by the George W. Bush administration, and with psycho Republicans now in charge of the House of Representatives, the U.S. is perilously close to sliding down the toilet.

In other words, Wasserman Schultz does not buy the Reaganesque fairy tale that this is "Morning in America." And so, she must be attacked. How? With a take off on an old Saturday Night Live skit that was only moderately amusing in the first place. It becomes downright nauseating in the hands of Rove's henchmen, who are intent on telling us that Wasserman Schultz is "Debbie Downer."

You can check out the brilliance of Rove's "creative team" below:

A couple of obvious questions come to mind: Did SNL license "Debbie Downer" for use by American Crossroads? If not, did Rove's hatchet men violate copyright law?

While you are trying not to guffaw, or puke, after seeing Rove's ad, we urge you to check out the response below from Velvet Revolution, highlighting some of the "forward thinking" positions of Reince Priebus, chair of the Republican National Committee. Naturally, American Crossroads thinks Priebus is a swell guy.

It's also worth remember that Wasserman Schultz once served on the U.S. House Judiciary Committee and made a number of strong public statements about the need for Rove to testify about his apparent role in a number of Bush-era scandals, including the political prosecution of former Alabama Governor Don Siegelman and the unlawful firings of U.S. attorneys. From a May 2008 article in The Hill:

Rep. Debbie Wasserman Schultz (D-Fla.) said that the House Judiciary Committee would be willing to arrest Karl Rove if the former White House official doesn't testify about his role in the firing of nine U.S. attorneys in 2006.

Wasserman Schultz, in an interview on MSNBC Tuesday, echoed the demand of House Judiciary Committee Chairman John Conyers (D-Mich.) that Rove would not be allowed to invoke executive privilege to avoid testifying. Rove could not invoke the privilege since he said he did not have conversations with the president about the attorneys' firing, Wasserman Schultz said.

Asked by MSNBC host Dan Abrams if the committee would go far as having Rove arrested, Wasserman said it would.

"Well, if that's what it takes," she said. "I mean we really cannot allow the co-equal branch of government, the legislative branch, to be trampled upon by the executive branch. The founding fathers established three branches of government. We are a co-equal branch, and this is an administration that essentially has ignored and disrespected the role of the legislative branch for far too long."

If Wasserman Schultz's fellow Democrats had exhibited some spine, Karl Rove might be in federal prison right now--or well on his way there. Instead, he is free to fleece money from corporate interests and use it to produce childish ads about "Debbie Downer." What a country.

Buddy Walker-security for the Va. Pilot asked me to meet him down at Norfolk's Military Circle Dec.28,2004

One thing didn't work--onto the next.