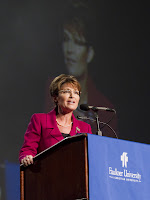 Sarah Palin came to Montgomery, Alabama, late last week for a $1-million fundraising speech at Faulkner University. She managed to insult college football fans at both of the state's powerhouse programs. Not a wise campaign move.

That's like going to Saudi Arabia and insulting Islam. In fact, that's probably understating it. College football  is way more important in Alabama than religion is in Saudi Arabia--or probably anywhere else. Suffice to say, Palin's gaffes were about as serious as they come here in the heart of Southeastern Conference country.

Bob Lowry, of The Huntsville Times, reports that Palin tried to appeal to the audience by noting the importance of college football in the state. But that's when things started backfiring on her. She mentioned the University of Alabama, but failed to mention the Crimson Tide's cross-state rival, the Auburn University Tigers. The Auburn campus is only about 40 miles from where Palin was speaking, and the undefeated Tigers are No. 7 in the country (ahead of No. 8 Alabama), so the orange-and-blue folks in the audience had to be miffed.

But that was nowhere near Palin's biggest blunder. That came when she mispronounced the name of Alabama coach Nick Saban, who is only the most famous person in our state--by far. After leading Alabama to a national championship last season and a No. 1-ranking this season (before Saturday's loss at South Carolina), Saban is a God-like figure among the Crimson Tide faithful who rule the state.

But Palin apparently has never heard of him. She pronounced his name "SAAB-an," as in the automobile. It is pronounced SAY-ban, as anyone who has the slightest knowledge about college football knows.

Imagine if a speaker went to Alaska and said, "It's great to be here in the same place that produced your wonderful governor, Sarah PAH-lin." Assuming Palin can pronounce her own name, she should have no trouble with Saban's.

Perhaps everyone in the Palin entourage was afraid to tell her how to pronounce a name correctly. Consider these insights from "Sarah Palin: The Sound and the Fury," a profile in the October issue of Vanity Fair:

Warm and effusive in public, indifferent or angry in private: this is the pattern of Palin’s behavior toward the people who make her life possible. A onetime gubernatorial aide to Palin says, “The people who have worked for her—they’re broken, used, stepped on, down in the dust.” On the 2008 campaign trail, one close aide recalls, it was practically impossible to persuade Palin to take a moment to thank the kitchen workers at fund-raising dinners. During the campaign, Palin lashed out at the slightest provocation, sometimes screaming at staff members and throwing objects.

After reading the account of Palin's speech in Alabama, my first thought was, "Why didn't someone on her staff pull her aside beforehand and say, 'Sarah, you don't know much about college football, but it's an extremely important subject--make that, the most important subject--in this state. And you need to sound like you know what you are talking about, not only for the men in the audience but also for the women. Trust me, many women in Alabama know college football inside and out. So make sure you mention both schools--Alabama and Auburn. And for God's sake, be sure you pronounce Nick Saban's name correctly. If you can't do that, it's better to avoid the subject altogether.'"

My guess is that no one on her staff had the cojones to make such a simple statement. They probably were just praying she wouldn't take a stab at the name of Auburn's coach, Gene Chizik. So Palin wound up looking like a ding-dong in public.

If Palin ever is elected president--God forbid--perhaps she can travel to the Vatican for an audience with the "Poop." That would pretty much wipe out whatever international credibility the U.S. might have left.
Posted by legalschnauzer at 9:35:00 AM

Sarah is just more fodder for comedy. Besides SNL, I found this Sarah Palin spoof that is so spot-on from what we see of her in real life.

PAY-lin is an idiot in so many respects that this gaffe comes as no surprise. However, the GOP faithful in Alabama that tout her as the female Reagan will give her a pass on this. They see her as some kind of modern day reincarnation of the Biblical Deborah. I think she's an opportunistic ex beauty queen with an irritating accent and a penchant for being a bitch to the little people. (Pssst...I'm a Republican.)

At least her telaprompter is not all she can use. She is a good speaker andputs OBAMA to shame. I'm a huge Alabama fan and my son, who is a coach, has even visited his house. I even pronounce his name wrong a few times. Just gores to show where your brains are. Football not more important things. By the way, don't even think that 1st family ever visited
alabama except to gloat on his great handling of the oilwell spill. As far as I'm concerned he can keep is healthy looking group at the house. I's like to see his wife's size 40 hips dance. Boy oh boy.