Bullying Continues Even When You Become An Adult 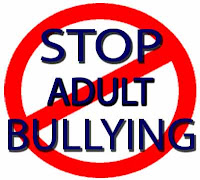 Bullying, and its potentially deadly consequences, has become one of the most discussed topics in America. The suicide of Rutgers University student Tyler Clementi is the best known of at least five cases where gay teens have killed themselves after reportedly being bullied. In the Cleveland suburb of Mentor, Ohio, four teens have died by their own hands in the past two years after being bullied.

The Web is awash with articles from both the academic and mainstream press about bullying, almost all focusing on youths. But here is an ugly truth about bullying: It doesn't end with the teen years. It can extend well into adulthood, and in some respects, adult bullying is even nastier than the teen variety--with consequences that can be just as severe.

One has to wonder if our culture somehow encourages bullying--in all age groups.

Consider the subject matter of this blog. If I were asked to give a one-sentence description of Legal Schnauzer, I might say, "It's about adult bullying and a court system that seems to sanction it." The vast majority of our posts, in one way or another, can be summed up in that simple statement. Come to think of it, I might need to change our tag line at the top of the blog.

You might say that I have experienced "bullying in reverse." I don't recall ever being bullied as a kid. But for some reason, The Man Upstairs has seen fit to get me well acquainted with it in adulthood.

If we examine the elements of the personal story we've laid out here at Legal Schnauzer, what do we learn?

* Our neighbor Mike McGarity, the guy with the extensive criminal record, tried to bully Mrs. Schnauzer and me into turning our yard over to his personal use;

* When that failed, McGarity hired William E. Swatek, an ethically challenged lawyer who tried to bully us with a bogus lawsuit;

* When it became clear that McGarity/Swatek had no case, corrupt Shelby County judges J. Michael Joiner and G. Dan Reeves tried to bully us in public courtrooms;

* When I filed legal-malpractice lawsuits against the lawyers who failed to protect our rights in the original case, Jefferson County judges Robert Vance and Allwin Horn essentially bullied us by unlawfully dismissing the cases;

* When I decided to write a blog in order to help expose corruption in Alabama courtrooms--and the broader American justice system--I started receiving numerous anonymous threats, including several that appeared to put our personal safety at risk;

* When fighting legal battles hurt our household finances, we started hearing from debt collectors who tried to bully us into paying money they could not prove we owed;

* When I continued blogging about touchy subjects--including corrupt lawyer/judges and unethical debt collectors---Bill Swatek and the Shelby County Sheriff's Department conspired to conduct an unlawful "auction" of our house;

* When none of that caused us to cave, someone prompted my employer, the University of Alabama at Birmingham (UAB), to cheat me out of my job;

* With me out of work, and our lawsuit against debt collectors hitting a key point in discovery, someone caused Mrs. Schnauzer to be cheated out of her job at Infinity Property and Casualty--a company that just happens to have close ties to one of the law firms defending the debt collectors.

When you add it up, the past 10 years of our lives have, for the most part, been spent battling bullies. And we are hardly alone.

The political prosecutions we've covered here--the Don Siegelman, Paul Minor, Gary White cases, and more--boil down to corrupt judges, prosecutors, and political operatives trying to bully people who are innocent or have been targeted for unconstitutional reasons, or both.

What about whistleblowers, such as Jill Simpson and Tamarah Grimes, who who speak out about wrongdoing that they have witnessed. Simpson experienced a fire at her home and a mysterious automobile accident; Grimes lost her job. Both became targets of bullies.

The record is clear that Republican strategist Karl Rove and/or his acolytes are at the heart of many bogus Bush-era prosecutions. That makes Mr. Rove and his henchmen (and women) Exhibit A of adult bullies.

In our view, adult bullies are different from their youthful brethren. Young bullies, while misguided and possibly disturbed, tend to be relatively direct and honest about their attacks. Their victims know exactly who is terrorizing them. Adult bullies often use more indirect and dishonest tactics. They try to hide behind someone's "skirt," making use of organizational or official cover. They often abuse power or associate themselves with others who abuse power.

Youth bullying tends to be very personal and "in your face." Adult bullying can be more impersonal, involving the very systems that are supposed to ensure equal protection of the law. Some of the most egregious adult bullying comes from lawyers, judges, police officers, sheriff's deputies, FBI agents, and others who operate under cover of the "law."

Adult bullies are, beneath it all, cowards. They often don't have the courage to bully their victims up close. But give them a badge, a robe, or a law license--or protection from someone in power--and their "inner bully" surfaces quickly.

Another point about adult bullying: It is not limited to men. Guys unquestionably can be accomplished bullies, and we've written about a number of sexual harassment cases that prove it. (See here and here.) But I know from firsthand experience that women can be every bit as vicious as their male brethren. Just consider my employment case at UAB: All six of the individuals who appear to be most directly responsible for my unlawful termination are women. And the in-house lawyer defending their actions is a woman. The record is replete with examples of how I was treated in a way that never would have been done to a female employee, at least not in my workplace. I've seen documents that indicate so much ass covering is going on, just in my case, it's a wonder any work is getting done at the university.

Surely women have helped bring an enlightened approach to leadership in some workplaces. But it sure hasn't happen in the place where I used to work.

Is there any good news in all of this? I think there is. One, I've learned that adult bullies often are not very smart. They tend to do stupid things, especially when you stand up to them. Two, technology makes it harder for bullies to get away without their attacks being known.

That's why we started this blog. And that's why bullies have not been able to shut it down.
Posted by legalschnauzer at 10:40:00 AM

And damn good for you LS!
We know a thing or two about bullies in Shelby County don't we?

Good for you. I have given up on Mississippi, and am seriously looking at getting out. I don't want my sons to stay here any longer. Good luck to you!

I hear you loud and clear LS and I can relate. I learned at an early age to stand up to Bullys because they are basically cowards who prey and pick on those who they consider weak. My Daddy said if you can't run with the big dogs you need to stay on the porch. Find a good fight and jump in it. Give as good as you get, and never let them make you hate them because if you hate them they win.