Did Rove's Plans for November Elections Have Tragic Consequences in Alabama? 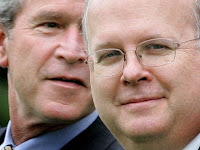 The mysterious death of an Alabama business advocate might have been triggered by plans to launder Indian casino funds to help elect Republican candidates in the November midterm elections.

Instigators of the plot include Karl Rove, former Bush White House strategist; Tom Donohue, president of the U.S. Chamber of Commerce; and Bill Canary, president of the BCA. American Crossroads, Rove's new nonprofit group, was to be the conduit for the unlawful operation.

The circumstances surrounding Stacy's death are sketchy and the Montgomery Police have not been anxious to provide further information on the alleged suicide. Some informed sources are convinced that Stacy became aware of a conspiracy by Canary, Donohue, and Rove to use Rove's new non-profit group, "American Crossroads," to launder Indian casino proceeds into the coffers of Republican Party candidates nationwide prior to the mid-term election and that Stacy wanted out of the partnership.

In 1999, Alabama businessman Ralph Stacy formed the Chamber of Commerce Association of Alabama (CCAA), which grew to some 60,000 dues-paying members in the state and dwarfed Bill Canary's smaller Business Council of Alabama (BCA), which had some 5,000 members. In 2003, Stacy and Canary agreed to merge their operations in an entity known as "The Partnership." Later, Stacy became a senior vice president of the BCA under Canary. However, Stacy seemed reluctant to enter into the full merger, which would give Canary and his GOP friends, including Riley, access to 60,000 CCAA member companies, and the first joint meeting of the merged group was not held until 2009 when US Chamber of Commerce President Tom Donohue keynoted the first annual joint meeting of the BCA and CCAA in Birmingham.

The Partnership reportedly had been an uneasy alliance for some time, and Madsen reports that Stacy wanted out of it. A number of Stacy's friends believe that is what led to his death:

On September 14, Stacy entered the BCA offices in the Business Center of Alabama Building in Montgomery and allegedly committed suicide using a shotgun. Those who are familiar with Stacy claim that his religious beliefs would have deterred him from suicide and that Stacy may have been using the shotgun to threaten Canary with a demand for the end to the business alliance between the BCA and CCAA.

This much is clear: The press in Montgomery is in no hurry to shine light on the story. As we reported recently, one of Stacy's long-time friends wrote the editor of the Montgomery Advertiser and asked why the newspaper has done almost no reporting on the high-profile death. Editor Wanda Lloyd sent the following reply on September 22 to Michael Rich, of Waynesville, North Carolina:

So sorry about the loss of your friend.

We have not followed up on this story.

Thanks for the reminder, which I have passed along to our metro staff.

That's probably the most limp response I've ever heard from a newspaper editor. And the Advertiser still has not done any follow up.

Once again, the mainstream press is failing the citizens of Alabama. But a journalist from D.C. has provided valuable insight into the circumstances surrounding Ralph Stacy's death.
Posted by legalschnauzer at 10:40:00 AM