UAB Has a Tortured Relationship With Bloggers and the First Amendment 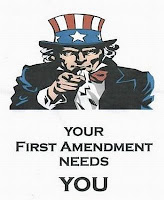 Does the freedom of expression guaranteed by the First Amendment to the U.S. Constitution apply to people who write blogs and work at the University of Alabama at Birmingham (UAB)?

The answer seems to be, "It depends on what you are writing about." That, of course, means the UAB administration has serious problems abiding by the Constitution. And we suspect UAB is not the only organization that has such problems around the country. In fact, we have written before about people who encountered workplace problems because of their blogs--here and here.

Regular readers know that I was unlawfully terminated at UAB, primarily because I write a blog about public corruption in Alabama, especially the Bush Justice Department's political prosecution of former governor Don Siegelman. So imagine my amazement the other day when I discovered that UAB had issued a press release touting one of its employees' personal blog.

Stephanie Rauterkus, an assistant professor in the UAB School of Business, writes a blog called 365 Days on a Budget. What's the blog about? Here is how UAB describes it in a press release:

"I wanted to revisit my family's budget and see how we could improve, and I wanted to keep a written record so that we would have something to look back on in the future," Rauterkus says. "I thought about it some more and the educator in me said 'I'll write about it on a blog so that others can learn what I learn as I go through the process.'"

Rauterkus' blog, 365 Days on a Budget, was started July 5. Every day, the professor, wife and mother of two updates readers on her struggles and successes as she attempts to balance both budget and life. The tagline for the website describes it as a chronicle of the daily challenges and triumphs of a "regular" family as it works to achieve its financial goals by keeping a watchful eye on spending.

It's hard not to notice the similarities between Rauterkus' blog and my blog. Hers, like mine, is truly a personal blog, hosted at Blogspot and not on a UAB server. Hers, like mine, addresses a matter of public concern--personal finance in her case, public corruption in mine. Both of us started our blogs with the desire to help educate the public about important matters. Rauterkus says she started her blog "so that others can learn." The tagline on my blog notes that we will be addressing corruption in the justice system and will provide information on "how you can avoid being cheated."

Stephanie Rauterkus essentially is providing "news you can use" for the general public, and UAB praises her efforts in a press release. I did much the same thing and got fired.

Here's something we should ponder: Many Americans, including Dr. Laura Schlessinger, do not understand the protections offered by the First Amendment. Many Americans think it means you have the right to say almost anything you please and not suffer consequences for it. Dr. Schlessinger, who recently had sponsors bail out after she used racially offensive language on her radio show, found out that's not what it means.

The First Amendment indeed allows Americans to say all kinds of things that some citizens might find offensive. But it does not preclude those who are offended from responding in a lawful fashion--boycotting your product, dropping sponsorship of your radio show, criticizing you in the press, etc. And if you work for a private employer, one who doesn't like what you've said, you can lose your job over it.

In the employment arena, the First Amendment only protects those who work for government employers--as Stephanie Rauterkus does, as I did. Even then, not all speech is protected. In general, it has to be speech about matters of public concern. Someone who works for the IRS and writes on his blog that he thinks his supervisor is fat, ugly, and stupid might want to update that resume. A court is likely to find that the personal appearance and attributes of an IRS supervisor are not matters of public concern.

Stephanie Rauterkus clearly is writing about matters of public concern, and so was I. And that raises this question: Why does she still work at UAB, while I'm unemployed?

It's pretty easy to figure out, actually. UAB's own grievance committee found that I should not have been terminated. I sat through the entire four-hour hearing, and no evidence was presented that I even should have been disciplined. UAB's own IT expert admitted I never wrote the first word of my blog on my work computer.

The university's claims that I was "researching" my blog at work fall flat, too. Under the UAB Acceptable Use Policy (AUP), which governs use of university computers, networks, and associated equipment, any violations of policy are to be handled with progressive discipline. That means a supervisor is to notify an employee of a violation and respond with discipline that progresses in nature--oral warning for first offense, written warning for second offense, and termination if necessary.

UAB never notified me of a violation or instituted progressive discipline--so my supervisors' own actions indicate even they did not believe I was doing anything wrong. And yet, I'm out of a job.

From a legal standpoint, my situation appears to involve a number of factors--age and gender discrimination, retaliation, wrongful termination, and more. But evidence strongly indicates that the biggest difference between Stephanie Rauterkus and me is in the content of our blogs.

The number of anonymous threats I've received on this blog, including one threatening my job about a month before I was fired, indicates political figures were unhappy with my truthful reporting about the state of our justice system in Alabama. Words straight from the mouth of one UAB official--Director of Employee Relations Anita Bonasera--indicate I was targeted because of my reporting on the Siegelman case.

I tape recorded the conversation, and you can listen to the three-minute segment here. For about the first 1:40, Bonasera and I discuss the nature of my job duties. At about 1:50, she admits my job issues are related to my blog. And at roughly the 2:08 mark, she admits I was targeted because of the Siegelman content on my blog:

Audio: UAB and the Cost of Blogging About the Siegelman Case

UAB officials admitted in my grievance hearing that they monitored my computer usage for roughly a month, even though they had not notified me of any alleged violations of the AUP--as required by university policy. And what did UAB learn from its investigation of my computer? That I had not written the first word on my blog while at work.

I wonder if the university will be conducting a similar investigation of Stephanie Rauterkus' computer usage. I wonder if it has, or will, conduct such investigations for the probably hundreds of UAB employees who write blogs or have Facebook pages--some of whom almost certainly are producing them while on the clock.

Somehow I doubt it. That's because overwhelming evidence indicates UAB does not mind if its employees blog--even when they are at work. They just don't want them to write a blog that tells the truth about the sorry state of our justice system--and causes one or more politicos to get their panties bunched.

Stephanie Rauterkus might feel secure in her blogging at the moment. But imagine this scenario: While writing her blog on personal finance, Dr. Rauterkus discovers that someone at a local bank is stealing from her family's account. She writes about the incident and provides tips to help her readers avoid being scammed. Imagine that the bank has higher ups who sit on UAB boards or give to the university--perhaps with the money they stole from Dr. Rauterkus and her family.

What would happen then? History tells us that UAB would launch an "investigation" of Dr. Rauterkus' blogging habits. And instead of producing a press release about her blog, they probably would hand her a pink slip.

At UAB, the First Amendment provides protection only as long as you don't step on some important toes.
Posted by legalschnauzer at 10:30:00 AM

This is Alabama, where there is a repbulican justice and democrtic InJustice.