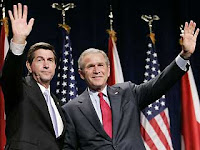 Alabama Governor Bob Riley might soon face a deposition in a lawsuit that stems from his efforts to land a $13-million, no-bid contract for a Virginia company called Paragon Source.

The Montgomery law firm of Thomas Means Gillis and Seay claims it is owed $78,000 for its work with the Alabama Legislature's Contract Review Committee on the Paragon Source case. Riley has blocked payment to the firm, and it countered with a lawsuit. Riley sought to have the lawsuit dismissed, but a state judge has allowed it to move forward and given both sides until September 20 to conduct depositions.

Depositions usually allow for wide-ranging questions, so the governor could face some uncomfortable moments. We wouldn't be surprised if the governor turns to his buddies on the Alabama Supreme Court for protection if the questioning veers into touchy territory, such as his campaign funding from out-of-state gambling sources or the actions of his son, Homewood attorney Rob Riley.

The controversy started when members of the Legislative Review Committee objected to the Paragon Source contract after learning the company had no business address, business license, or Web site. Rep. Alvin Holmes (D-Montgomery), chairman of the committee, claimed the business operated out of the trunk of the owner's car and led the fight to block the contract, using the Thomas Means firm.

As so often happens in Alabama, race became an issue. Reports Gambacurta:

The Thomas Means law firm billed the state for its services and received a partial payment last year. However, the Comptroller's Office refused the pay the $78,000 balance and a spokesman for the governor said since the committee did not have standing to sue, the committee's law firm was not entitled to compensation.

Thomas, Means, Gillis and Seay, a law firm made up almost entirely of black attorneys, then hired Gallion to sue the Comptroller in an effort to collect the balance due of $78,000.

Holmes stated publicly that he had been told that the governor said, "Do not pay that black law firm."


All judges in Montgomery County recused themselves, so the case is being heard by Jefferson County Circuit Judge Tom King. Riley's actions drew concern from the judge. Reports Gambacurta:

On Monday, King ruled in favor of the law firm, by denying the defendant Comptroller's motion to dismiss. In his ruling, Judge King offered a stinging rebuke of Gov. Riley for the appearance of retaliation and racism in this case.

"The days of political retaliation and institutional racism in Alabama should remain only on the silver screens of Hollywood," King wrote. "The Governor of this Great State should treat all races and ethnicities equally be they majority or minority, favored or disfavored. Although this Court truly hopes these allegations prove to be false, only depositions and inquiry into the facts will show the truth."

Gallion says the case boils down to the Riley administration's lack of transparency regarding the Paragon Source contract:

"The reason Gov. Riley is essential in this thing is it's clear that the governor's office is calling the shots on not producing the Paragon Source no-bid contract documents, which is the genesis of this whole matter and why the Legislative Contract Review Committee hired the Thomas Means law firm.

"That's what this whole thing is about: the $13 million Paragon Source no-bid contract. Nobody in the governor's office, the Finance Department or the Comptroller's Office would produce any documents pertaining to this Paragon Source contract.

"What's the governor covering up? Why will he spend taxpayers' money to try to fight something in order just to continue to keep the public from knowing about the no-bid contract? That's the whole bottom line," Gallion said.

Gallion has sought to depose Riley before, in the case of insurance executive John Goff. A judge, however, dropped Riley from the case, so that deposition never took place. It appears the governor will be facing questions under oath this time:

Gallion added: "It's very simple, they're retaliating against and punishing Thomas, Means, Gillis and Seay and the Legislative Oversight Committee for doing their job and trying to get the records for the public to see on Paragon Source. And if that's not the case, it's very simple, under the Alabama Open Records Act, the governor should produce these records, the Finance Department or whoever has them."

The U.S. Justice Department is investigating a complaint from Holmes that the governor refused to pay the legal fees because most of the firm's attorneys are black. Gallion said the discovery and depositions will get to the bottom of that matter.

"Well, that comes from Alvin Holmes' quote, "Don't pay that black law firm." He has information that was said. That's part of the discovery we're going to find out. We'll find that out. If that's it, then it's clearly institutional racism.

"Now I don't care whether they're a black law firm or white law firm, Democrat, Republican or Whig, the Alabama taxpayer deserves to have and view all of the records pertaining to the Paragon Source contract," Gallion said.

What's that old saying?..."leopards do not change their spots."
Maybe Massa Riley can get his buddy Massa Barbour and the CCC gang (read KKK) to help him out with "uppity" opposition.
Good job exposing this LS.