Siegelman Seeks Reversal Based on Ruling in Skilling Case 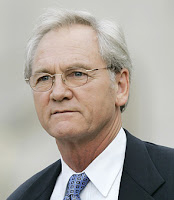 Former Alabama Governor Don Siegelman is asking a federal appeals court to reverse convictions against him, based on the U.S. Supreme Court's recent ruling that narrowed honest-services fraud law.

Siegelman and codefendant Richard Scrushy say the U.S. 11th Circuit Court of Appeals should overturn their convictions because of the Supreme Court's findings in a case involving former Enron executive Jeffrey Skilling. Attorneys for Siegelman and Scrushy filed briefs with the 11th Circuit yesterday.

One issue, Heldman said, is that the jury was tainted by instructions on a law that the Supreme Court now has held was unconstitutionally vague:

Most of the case against Governor Siegelman is based on the law that the Supreme Court addressed in Skilling, the so-called “honest services” law. The Supreme Court held in Skilling that the reach of that law is much narrower than prosecutors had long believed. It covers only true bribery and kickback cases. Governor Siegelman’s case is not a bribery case. It is purely a case about lawful contributions to the lottery campaign, not a case about bribery. Governor Siegelman did not get a penny from those campaign contributions for himself. Under Skilling, there simply was no crime.

This leaves only two charges against Governor Siegelman, under laws other than the “honest services” statute. But Skilling requires dismissal of those charges as well. In charging Governor Siegelman under those other laws, the prosecutors in this case have tried to expand those laws beyond the words that Congress wrote. The Supreme Court in Skilling emphasized that in our system, criminal laws must be carefully written to give notice in advance of what is prohibited, and that prosecutors cannot stretch the laws to cover the prosecutors’ chosen targets. Here again, Governor Siegelman simply did not break any laws.

Here is the full Siegelman brief:

Siegelman Dismissal Brief
Posted by legalschnauzer at 9:46:00 AM

Don Siegelman's conviction will most likely be overturned, but will he 1) be set free 2) be tried again on the other charges or 3) will Eric Holder instruct Leura Canary, who should have been out of a job over a year ago, to drop the case? If Obama, a Constitutional Law professor, doesn't tell Holder to drop the case, I will have serious reservations about supporting The Prez for re-election in 2012. Perhaps Rep. Dennis Kucinich & Rep. Alan Grayson with their plan to provide Medicare for all would be a better choice than Barack Obama & Joe Biden.

I concur. We will have serious doubts about continuing to support an administration with such high legal credentials that does not clean up the DOJ. If nothing else happens, the least Obama can do is to appoint some new justices, and fire and investigate some of the charges lobbed by colleagues against Rove affiliates, such as Canary.