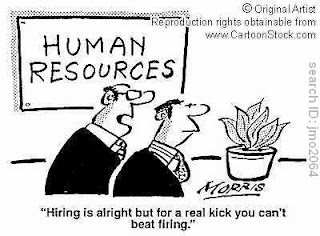 Being cheated out of your job in the worst economy since the Great Depression does not come with many moments of hilarity.

But my unlawful termination at the University of Alabama at Birmingham (UAB) did come with one slice of comedy. And it raises these questions: Are human resources (HR) departments a total waste of carbon? Can the same be said for in-house lawyers?
My comic moment came on May 29, 2008, when I opened my e-mail and found a missive from Anita Bonasera, UAB's director of employee relations. This was 10 days after I had been "fired," and the e-mail contained a copy of my termination letter as an attachment. Here is the body of the message:


I have attached draft for your review. Cheryl, John and Lisa have reviewed and I would appreciate your input. Thanks. /Anita

You will note that it was sent to the original recipients at 8:59 a.m. on May 19. The recipients were Pam Powell (my boss), Dale Turnbough (Powell's superior), and Kristi Lamont Ellis (who held some title--not sure what it was--in Public Relations and Marketing). Later that day, in a meeting with Bonasera and Turnbough, I would receive my very own personal copy of the termination letter, along with notification that my 19 years of service at UAB were over.

Ten days later, Bonasera would forward this e-mail . . . to me. I can only assume she did it by mistake. In addition to giving me a much-needed belly laugh, it provided names of the folks in UAB's chain of command who signed off on my termination.
The e-mail tells us that "Cheryl," "John," and "Lisa" have reviewed the letter. That would be Cheryl E.H. Locke, then director of human resources who since has left for Wake Forest University; John Daniel, director of the UAB Office of Counsel; and Lisa Huggins, a lawyer in the Office of Counsel.
What else does the e-mail tell us? For one, my termination letter was signed by Dale Turnbough. But we learn that she didn't even write it. Based on the e-mail, it appears that Bonasera wrote it and forwarded it to Turnbough for review. Turnbough had almost zero knowledge about my job duties and performance--and Bonasera had even less.

UAB Termination
Posted by legalschnauzer at 9:45:00 AM

I challenged my firing at Florida East Coast Industries & Robert Francis Nelson, the in-house attorney & a member of the Alabama State Bar as well as The Florida State Bar laughed at me because he said & I quote, "You're not protected because you're not Black, not a woman or over 40." You're just another f@cking idiot who didn't pay attention in law school. He failed to look at my personnel file & see that I am Native American. I know In-House Lawyers who fire people without cause just to free up money in the budget for their next promotion. Many of them truly are worthless.

I know first hand what it is like to be crucified with extreme prejudice.

It traumatized me. It made me afraid to even try again.

Going through the interview process is something I just can't handle.

I am reliable and always got the job done but, there is always some "Demon" You have to "deal with" one every job..somebody on a "Power Trip" who thinks They are God Almighty. It's scary.

Roger, over there in Alabama the good old boy network can do what they want to anybody they want to do it to. You weren't part of the club, you didn't suck up to the right wing loonies and therefore they didn't like you because they couldn't control your mind. I really hope you get some satisfaction out of this someday as well as a bunch of money. And in the end, God knows what happened and I'm pretty sure he is getting fed up with the 'Religious Right'.
(I usually post under starkvillebiblestudents but dropped my blog).

I know first hand what's it like to be legally lynched and crucifed with extreme prejudice too Hooboyslimm. It traumatized me, but it didnt' kill me. It made me stronger.
Those who have faith have no fear, those who have fear have no faith.
They win whem they make you afraid to even try.