Series of podcasts from Vice Media shine unflattering light on Drummond's past and present, as company faces uncertain future at home and unrest abroad 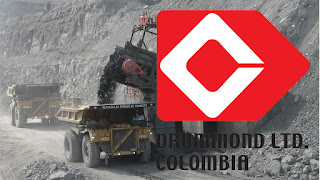 Vice Media has produced a series of podcasts, focusing on unsavory episodes from Drummond Company's past and present. The podcasts, called "The Crisis," come as Drummond already is operating on shaky ground -- with a possible sale in its future and violent protests rocking its operations in South America. From a post at banbalch.com, under the headline "Podcasts on Colombia Murders and North Birmingham Knocks Wind Out of Drummond Company":

While the heirs of Drummond Company hope to [diversify] their holdings and possibly sell their enormous coal operation in Colombia, Vice Media has stirred international intrigue in a multi-episode podcast series called, “The Crisis.”

The podcasts have come at the worst time for Drummond Company.

The podcasts come just weeks after the 20th anniversary of the murders of two Colombian labor leaders who worked for Drummond Company, one of whom was shot dead in front of his Drummond colleagues.

In addition, now, today [5/25], Colombia is being rocked by daily and violent protests. As Reuters reported hours ago:

The Andean country has seen nearly a month of demonstrations and thousands of road blockades. Though protest leaders reached pre-agreements for talks with the government late on Monday, they have promised marches against inequality and police abuse, among other issues, will continue.

The protests and instability have caused Colombia coal exports to drop 65 percent in a single week this month according to news reports.

As for the podcasts, they do not paint a pretty picture. From a journalism standpoint, Ban Balch reports, they are "smoking hot"" They also are a mix of history and up-to-the-minute reporting. Here is a summary of several episodes:

At the heart of the reporting is this question: Can Drummond, in its current form, be trusted to operate with integrity -- in Alabama, South America, or anywhere else? From Ban Balch:

As we wrote in March, “Drummond appears to have lied in court filings with manipulated Balch invoices, authorities in Colombia may no longer believe corporate officials or value Drummond’s integrity.”

And now, unfair or not, the podcasts link the unsavory and criminal behavior of the North Birmingham Bribery Scandal with the atrocities in Colombia from over two-decades ago.

Will Drummond’s top executives and “confused” General Counsel [Blake Andrews] continue to goose-step with Balch & Bingham or break the chains that has hurt the company, the brand, the Garry Drummond legacy?

Vice Media must have sensed that something smells funny in Alabama.

Yes, and Vice was right. This is importantly reporting, especially for folks in Birmingham area.

Episode 4 also includes an insightful interview with a young Tarrant resident named Gabe, who grew up in the shadows of Drummond's ABC Coke plant.

David Roberson talks about being hired by Garry Neil Drummond.

Roberson describes his role as a go-between between Drummond and Balch & Bingham.

Great line from an activist named Katrina: "If you don't have a seat at the table, you are on the menu." She realizes she had been gathering intel for Drummond. She eventually gets a knock on the door from FBI agents.

Episode 4 discusses the financial ties between Jeff Sessions and Balch/Drummond.

Gabe talks about the rotten-egg smell that permeates Tarrant.

Gabe goes to college in north Alabama on a $10,000 scholarship from Drummond -- the first it has awarded in Tarrant.