Presence of file-sharing software, such as LimeWire, or a subscription to an online provider of illegal images, can establish knowing intent in child-porn cases


If prosecutors strike out on the four-factor test federal courts have established to determine if an accused acted knowingly in a child-pornography case, they have at least two other chances, based on our research. We've shown hat -- given an ethical judge and a competent jury -- prosecutors are likely to strike out on the four-factor test in the pending Missouri case of U.S. v. Scott J. Wells.

So,, how might the feds fare with their two additional strikes in Wells? Let's take a look at the questions those pose. We will call these factors No. 5 and No. 6:

(5) Did Wells use file-sharing software, such as LimeWire or Kazaa?

Our research indicates this might be the most important arrow in the prosecutor's quiver for proving knowing intent in a child-porn case. In fact, if it can be proven an accused used peer-to-peer (P2P) file-sharing software -- and LimeWire and Kazaa are two of the most commonly used such programs -- his chances of beating charges in a child-pornography case are very slim.

LimeWire was at the heart of U.S. v. Hill (8th Cir., 2014), a case that originated in Southwest Missouri and includes some of the same investigators involved in Wells. From the Hill opinion:

Hill admittedly downloaded and actively used LimeWire—file-sharing software that made the scores of pornography files in Hill's shared folder accessible to any LimeWire user in the world, including Officer Smith. LimeWire itself was a publicly accessible program available for free download by anyone with a computer and an internet connection. Hill had no reasonable expectation of privacy in such publicly shared files and “ ‘cannot invoke the protections of the Fourth Amendment.’ "[quoting United States v. Ganoe, 538 F.3d 1117, 1127 (9th Cir.2008)] . . .

The evidence presented at trial was also more than sufficient to convict Hill of knowingly receiving and distributing child pornography. At trial, Hill unequivocally confessed to “knowingly receiving and distributing child pornography” as charged in the indictment and intentionally using LimeWire to download and view the images and one of the videos for which he was convicted. Hill claimed he searched for and downloaded child pornography in an ill-conceived plan to protect his stepdaughters, not knowing the files in his LimeWire shared folder would be accessible to other users. But the jury was not obligated to accept Hill's admittedly irrational justifications and belated claims of ignorance.


Kazaa was central to a case styled U.S. v. Griffin, 482 F.3d 1008 (8th Cir., 2007). That case started with an investigation of child-porn distribution in Denmark and found its way to James Griffin in Davenport, Iowa. From the Griffin opinion:

Griffin admitted that he downloaded child pornography from Kazaa — an internet peer-to-peer file-sharing network — but maintains that he only downloaded the images and videos for his personal use, not for distribution to others. However, Griffin also admitted that he knew Kazaa was a file-sharing program and knew that, by using Kazaa, other Kazaa users could also download files from his computer. The government asserted that Griffin's use of Kazaa with knowledge of its capabilities constituted distribution. By using the file-sharing site, Griffin enabled other Kazaa users to download files from Griffin's shared folder, including any child pornography files stored there. Otherwise, the government argued, Danish police could not have traced the partially downloaded child pornography clip discovered in Denmark back to Griffin.


Bottom line: Hill and Griffin were toast when prosecutors were able to show they used file-sharing software to receive and distribute child pornography. The law is settled that the use of such programs establishes knowing intent. But what about Scott Wells? What do investigators say in their complaint/affidavit (embedded at the end of this post) about file-sharing programs. 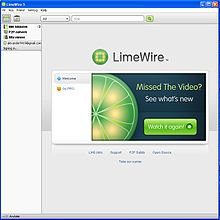 The answer is simple: They do not say a word. No mention of LimeWire, Kazaa or any other file-sharing program. The evidence we've seen so far indicates the government cannot show Scott Wells used a file-sharing program -- and that means the feds' chances of proving Wells acted knowingly are significantly reduced.

Turning first to the website itself, the evidence is unequivocal that Lolitagurls.com was a child pornography site whose primary content was in the form of images. Indeed, the owner admitted that it "was a child pornography website that he operated as a source of income." The owner's confession to the FBI established that Lolitagurls.com actually contained illegal content, the possession, receipt or transfer of which would be a violation of 18 U.S.C. § 2252. . . .

The affidavit then moves from one certainty, that child pornography was on the website, to another—that [Michah] Gourde had access and wanted access to these illegal images. Gourde subscribed to Lolitagurls.com for over two months, from November 2001 to January 2002. As a paying member, Gourde had unlimited access to hundreds of illegal images. He clearly had the means to receive and possess images in violation of 18 U.S.C. § 2252. But more importantly, Gourde's status as a member manifested his intention and desire to obtain illegal images.

Membership is both a small step and a giant leap. To become a member requires what are at first glance little, easy steps. It was easy for Gourde to submit his home address, email address and credit card data, and he consented to have $19.95 deducted from his credit card every month. But these steps, however easy, only could have been intentional and were not insignificant. Gourde could not have become a member by accident or by a mere click of a button. This reality is perhaps easier to see by comparing Gourde to other archetypical visitors to the site. Gourde was not an accidental browser, such as a student who came across the site after "Googling" the term "Lolita" while researching the Internet for a term paper on Nabokov's book. Nor was Gourde someone who took advantage of the free tour but, after viewing the site, balked at taking the active steps necessary to become a member and gain unlimited access to images of child pornography. Gourde is different still from a person who actually mustered the money and nerve to become a member but, the next morning, suffered buyer's remorse or a belated fear of prosecution and cancelled his subscription. Instead, Gourde became a member and never looked back—his membership ended because the FBI shut down the site. The affidavit left little doubt that Gourde had paid to obtain unlimited access to images of child pornography knowingly and willingly, and not involuntary, unwittingly, or even passively.


A subscription to Lolitagurls.com showed clear knowing intent in Gourde and pretty much ensured he would be convicted -- with the conviction upheld on appeal. What about Scott Wells? Does the government, in its complaint/affidavit, point to his membership in any online provider of illegal images? The feds own evidence, as it exists for now, does not say a word about Wells' involvement with any such subscription site.

Through two posts, we have examined six factors the government usually uses to prove an accused acted knowingly in a child-pornography case. Our analysis shows the feds, based on their own complaint/affidavit, struck out on all six factors in U.S. v. Wells-- and yet, Scott Wells has been detained for more than two years, and he remains (for now) in the Greene County Jail in Springfield, MO.

We can find no sign of probable cause to support Wells' arrest, detention, or a search of his home. And yet, he remains behind bars because of charges the government almost certainly cannot prove.