Lies my Missouri public defender told me: With Carol's freedom at stake in bogus "assault" case, Patty Poe cooked up some double whoppers, with cheese (Part 3) 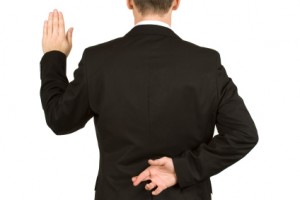 If you have done your legal homework and presented it to your lawyer to support a key claim or defense in your case, be on alert if you get a response like these: "IN MY OPINION, your research is not on point" or "I DON'T AGREE with all of your contentions." Responses like these -- especially if they are not presented with any relevant and accurate citations to law -- are a strong sign your lawyer is lying to you. And that likely means they are working for the other side, not for you.

My wife, Carol, and I have loads of experience with this in Alabama, and most recently, we got another sour taste of it from our interactions with Missouri public defender Patty Poe. (See here and here.)  In fact, Poe provided a classic example of how the compromised lawyer uses this unseemly trick.

From January through May 2017, Carol represented herself in a bogus criminal "assault on a law enforcement officer" case, brought for the sole reason of impeding civil claims related to our unlawful eviction that ended with cops breaking Carol's left arm. During that time, Carol filed at least four pro se motions that should have disposed of the case -- had Judge Margaret Palmietto bothered to hear them.

After Poe came on board in late May, we asked her multiple times to: (a) Schedule Carol's motions for hearing; (b) Modify them and refile them under her own name (if necessary) and seek a hearing; or (c) Start from scratch and file her own motions that would be dispositive, largely on constitutional grounds, and seek a hearing.

Poe refused to do any of those things, instead insisting that the case was headed for trial. She also claimed motions to dismiss were improper, in the circumstances of Carol's case, under Missouri Criminal Procedure. What was her excuse for failing to seek dismissal and for refusing to file pre-trial motions -- on issues that must be raised before trial or you risk waiving them, both at trial and on appeal? Here is how Poe explained it in an Aug. 27 email to Carol:

In regards to your Pro Se Motions, I won't refile them under my name because I don't agree with all of your points and/or the legal basis. Ethically, I can't file a motion to which I don't wholly support.


Let's address the second part of Poe's response first. Here are the relevant portions of Missouri Supreme Court Rule 24.04. (Note: As you will see below, Carol raised the issue of vindictive prosecution in a pre-trial motion. Also, she filed two motions that addressed the defective Probable Cause Statement. So, even by Poe's misstated standard, those two issues clearly were in play and should have been raised before the court.)

(b) Motion Raising Defenses and Objections.

1. Defenses and Objections Which May Be Raised. Any defense or objection which is capable of determination without trial of the general issue may be raised before trial by motion.

2. Defenses and Objections Which Must Be Raised. Defenses and objections based on defects in the institution of the prosecution or in the indictment or information other than that it fails to show jurisdiction in the court or to charge an offense may be raised only by motion before trial. The motion shall include all such defenses and objections then available to the defendant. Failure to present any such defense or objection as herein provided constitutes a waiver thereof, but the court for cause shown may grant relief from the waiver. Lack of jurisdiction or the failure of the indictment or information to charge an offense shall be noticed by the court at any time during the pendency of the proceeding.


This section contains quite a bit of legalese, but can anyone find a single sentence that supports Poe's claim that a motion to dismiss is proper only in limited circumstances? I can't. In fact, the gist of the section is this: If you have anything that can be raised in a pre-trial motion, you had better do it or you risk waiving it.

(a) The Probable Cause (PC) Statement was made in bad faith, including multiple false statements and omission of facts that point to Carol's innocence;

(b) The PC Statement represents a gross "cover charge," brought only to impede Carol's efforts to achieve justice in a civil proceeding;

(c) Debi Wade, author of the PC Statement, admits she did not witness any alleged push involving Carol and Officer Jeremy Lynn. Wade says she was "advised" of such an event by an unnamed individual, making this inadmissible "sub hearsay";

(d) The PC Statement failed to state that the eviction itself was unlawful on multiple grounds.

(a) Charges were brought against Carol only because we challenged landlord Trent Cowherd's unlawful eviction, which ended with cops breaking Carol's arm.

(a) We had filed a notice of appeal the day before the eviction, putting an automatic stay on execution. Carol knew this, and when unknown men crashed through her front door, she had every reason to believe they were there unlawfully, and we were the apparent victims of a home invasion.

(b) Under Missouri's Castle Doctrine, Carol had every right to defend herself and her property. This is true even though a written statement from "victim" Jeremy Lynn shows that he "caused physical contact" with Carol, not the other way around. In other words, Carol did not "assault" him, but under the circumstances and the Missouri Castle Doctrine, she had every right to use force to protect herself.

(a) Debi Wade claims Carol "barreled headfirst" into her, but the Misdemeanor Information (MI) makes no mention of such an incident, so Carol is not charged with that. The two charging documents contradict each other, raising questions about the accuracy of both.

(b) The PC Statement omitted at least six key facts that are favorable to Carol and point to her innocence.


By clicking on the four links above, you can see that Carol's pro se motions are supported by accurate citations to law. Compare that to Poe's email statement claiming to disagree with Carol's assertions -- and you will notice that Poe's words are supported by . . . well, nothing.

As for Poe's stated concerns about her ethical obligations, that is laughable -- as we will show in an upcoming post.