Campus Crest Communities CEO Ted Rollins apparently has gone into crisis-management mode in the wake of our report about his illegal drug use while completing a deal last summer for a new student-housing complex near Colorado State University.

A source tells Legal Schnauzer that Rollins is trying to coerce his daughter, Sarah Rollins, into signing a document that would retract her earlier statement that her father smoked marijuana and encouraged underaged individuals to join in during a trip to Fort Collins, Colorado.

As we reported in February, Sarah Rollins told her mother, Birmingham resident Sherry Carroll Rollins, about the drug activities that took place during a party at the home of Josie Plaut, an official with the Institute for the Built Environment (IBE) at Colorado State. Sherry Rollins reported the information to us in a videotaped interview.

The reports about marijuana use are relatively minor compared to the gross abuses in Alabama's court system that apparently were designed to benefit Ted Rollins. So why does Mr. Rollins seem somewhat exorcised about the "Rocky Mountain High" post? Are Campus Crest investors, under the direction of Vivek "Vick" Seth of Tampa-based Raymond James, concerned about Ted Rollins' cavalier attitude toward drug laws? Are Colorado State officials uncomfortable with Rollins' recreational activities?

Our guess is that the answer to both questions is yes. The issue might be particularly sensitive at Colorado State because it appears The Grove project there might not have been approved without the help of Ms. Plaut and IBE.

Protests from residents caused the Fort Collins Planning and Zoning Commission to reject Campus Crest's initial proposal for an apartment complex under The Grove banner. But Campus Crest hired IBE to help tweak the plan, and it wound up being approved last June.

Would Ted Rollins really try to force his daughter to sign some sort of false document in order to cover up his own poor judgment while on a business trip? We know that Rollins appears to have no qualms about signing false documents himself. As we have noted in previous posts, his outlandishly low child-support payments are based on an Alabama CS-41 document that states, under oath, that he makes roughly $50,000 a year--even though he owns a company that owns three private planes.

But to pressure his 18-year-old daughter to sign a false document? That seemed over the top, even for Ted Rollins. So I decided to ask him about it, with a series of questions via e-mail:

I understand that you are trying to coerce your daughter, Sarah Rollins, into signing a sworn statement that the two of you did not smoke marijuana at Josie Plaut's home in Fort Collins, Colo., during your trip to get approval for The Grove project at Colorado State.

As you apparently are aware, I ran a post on Feb. 23, 2012, that included a videotaped interview with Sherry Carroll Rollins (your ex wife) in which she stated that Sarah had told her that you had smoked illegal drugs at Ms. Plaut's house and had encouraged her to do the same.

You also are probably aware that I have run multiple posts--the most recent being today, March 14, 2012--showing that you signed a false document under oath in your Alabama divorce case, meaning your child support is based on fraudulent information.

1. Why are you trying to force your daughter into signing a false sworn statement about the marijuana episode in Colorado? Have you, Campus Crest, and Ms. Plaut experienced some negative feedback from the article? If so, what was the nature of the feedback and from where did it come? Does it have potential financial implications for you, your company, and Ms. Plaut?

2. You seem to be claiming that your daughter has a faulty memory of events in Colorado. And yet Sarah Rollins clearly remembered the name of Josie Plaut. And according to public documents, Ms. Plaut did in fact work with you on the Fort Collins project, through her position at the Institute for a Built Environment (IBE) at Colorado State. Public records show that Sarah Rollins has an excellent memory about key people and events in Fort Collins. So why should a reasonable person believe her memory failed her regarding the drug activities at Ms. Plaut's house?

3. Are you claiming that you have never partied with Ms. Plaut and others from the IBE at Colorado State?

4. Are you aware that you apparently are attempting to coerce your daughter into committing perjury? Are you aware that perjury is a Class C felony in Alabama, and you could be at risk for a charge on conspiracy to commit perjury?

5. Is Sarah Rollins' admission to the University of the South at Sewanee, which came after you met with school officials in late January, contingent on her willingness to sign a false document that will clear up your problems relating to the Fort Collins marijuana episode?

I would welcome your responses to these questions by 10 a.m. (CDT) on Friday, March 16.

As has been his custom, Ted Rollins did not respond to my questions. But a source has provided us with evidence that shows Ted Rollins is a hard-partyin' kind of guy--and folks from Colorado State like to join in the fun. Below are photographs that I'm told were taken at Ted Rollins' birthday party last September in Lake Tahoe, Nevada. I'm also told that Mr. Rollins flew in a number of Campus Crest employees and supporters, along with some Colorado State representatives--all of which is pretty impressive for a guy who makes $50,000 a year.

The party had a Bollywood theme, and here are several folks who were decked out for the ocassion. My source says that is Josie Plaut on the far left, looking quite fetching in a green Indian outfit. Details about the event are sketchy, but I believe one or two other Colorado State folks were on the premises: 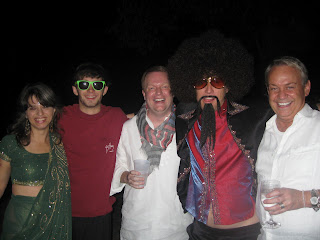 The Fort Collins residents who strongly opposed The Grove project might have this question: If representatives from Colorado State's IBE now are partying down with Ted Rollins and Co., was the institute ever an objective observer in the planning and zoning process? Was IBE's ultimate support of the project pretty much bought and paid for by Campus Crest Communities? Will The Grove actually wind up being a "green" project that is a positive presence for those who live in nearby residential neighborhoods?

While we're at it, here is the man of honor himself, with some other celebrants. That's Ted Rollins on the far right, along with individuals that I believe are various investors and directors with Campus Crest. Something tells me that the four fellows in this picture are worth a decent chunk of dough. Isn't it interesting that a guy who makes $50,000 a year could attract such financial backers? 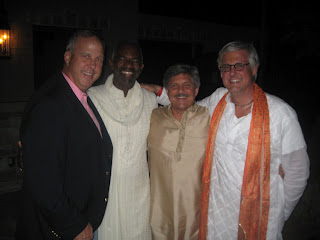 Where's the picture of Uncle Ted partying with some of Alabama's officers of the court?

A public admission of drug use can have all sorts of unintended consequences. It can screw up your security clearance for federal government contracts and government financial assistance for your business.

A student who has a felony drug conviction can't get financial aid for 2 years after the conviction and the parents of a college student who are able to claim the American Opportunity/HOPE Tax Credit lose it.

You may be permanently denied financial aid if you have been convicted 2 times for selling, and 3 times for possession.

Once a father starts lying where does it end. The cost of one year at Sewanee is $43,418. http://admission.sewanee.edu/finaid/eligibility/
Since Sarah's mom is eligible for food stamps you might think, well at least Sarah should get decent financial aid. Wonder if Sewanee will buy that Dad only makes $50,000 a year because Sewanee counts non custodial parent as well as his current wife into the equation. How many courts and organizations are going to be willing to allow Ted to lie? Seems honest parents paying their share get cheated if Ted is allowed to lie again. If Sewanee catches his lie seems that should serve as proof for his family that he lied to cheat them. Once Ted started his lies he has to continue his lies or go back and admit what he did and hope he doesn't serve time. From Sewanee's website.
Divorced or Separated Parents
In situations involving separated or divorced parents, Sewanee believes the non-custodial parent retains an obligation to assist the student with his or her educational costs. To this end, Sewanee will calculate an expected contribution from the non-custodial parent which is added to the calculated contribution of the custodial parent. Special circumstances regarding the non-custodial parent obligation will, as circumstances warrant, be taken into consideration.

Re-Married Parents
In situations involving re-married parents, financial data from the step-parent(s) is mandated by law, and such data will be utilized in calculating the expected parental contribution. Pre-nuptial agreements do not apply.

I'm fairly certain his current wife might be drawing a paycheck from Campus Crest Communities, even though she isn't an employee. Interesting. How would one research that?

I generally support your investigative efforts. In fact, I enjoy them as much as the next guy. But I'm alarmed that you are going after Josie Plaut. She's cute as hell. Can't you find an ugly woman to rag on?

By the way, I believe that IBE (where Josie works) no longer is working with Campus Crest. I suppose you could try to verify with IBE or CC to be sure.

Perhaps, after the project in Fort Collins was pushed through with IBE's "help" and "local credibility", Campus Crest wasn't willing to pay them any longer.

Or, IBE finally woke up and realized the scumbags they were working with. (Perhaps less likely since Josie seems to enjoy all the perks and trips that come with doing business with Ted.)

Or, IBE decided they needed to sever the relationship with CC after LS's reporting on Josie and Ted providing weed to a minor.

So much for CC using IBE's help to make their other new projects more sustainable. "Greenwashing" at its finest.