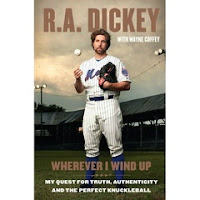 New York Mets pitcher R.A. Dickey reveals in a new book that he was the victim of sexual abuse as a child.

Dickey's revelations are the latest in a string of stories about the sexual abuse of boys, many of the cases connected to sports. The issue jumped to front pages with the arrest last fall of former Penn State assistant football coach Jerry Sandusky.

In most of the recently reported cases, the perpetrator was an adult, usually a man in a position of trust. Dickey's story has a different twist--he was sexually abused by other children. From ESPN:

New York Mets knuckleballer R.A. Dickey openly discussed Tuesday the sexual abuse he said he endured as a child, which he chronicles in detail in memoirs due to hit bookstores later this week.

Dickey, author of "Wherever I Wind Up," said he was victimized by two separate perpetrators during the summer he was 8 years old -- by a 13-year-old female babysitter and a 17-year-old male.

"I started writing the book in 2005, and it was too painful then to write," Dickey said. "So I set it down a couple of years until I felt like I had the equipment to be able to hold it well and talk about it, in an effort not only for my own catharsis, but as a possibility to help other people. Sure, it's been difficult, but I feel like I'm OK with it."

"One of the hopes I have for the book, and will have as long as it's out, is that people will be able to draw something from it that may help them -- whether it's to talk about it more, not to be afraid, to be open with what's happened, and that there are people available that will love you no matter what. I kind of grew up in a place where I didn't necessarily feel that."

Dickey said he struggled to share his childhood experiences with his wife and once contemplated suicide. From The New York Daily News:

Dickey, who dedicates the book to his wife and their four children, writes about how the abuse made him terrified of intimacy, of truly trusting another human being. He writes about how Anne’s love and faith and forgiveness sustained him through another crisis in his life, when he had an affair — a transgression he explores with deep remorse, one that had him mulling how he might end his life during the winter of 2005-2006.

“I betrayed my wife and there are not words that can adequately convey the guilt I felt for hurting the person who has given me so much love, who I share my life with,” said Dickey, who adds he never went so far as to attempt suicide.

Dickey credits intensive counseling and therapy, prayer and faith, and the steadfast love of Anne and his kids for helping him through his most difficult moments.

Can something positive come from the spotlight currently shining on child sexual abuse? Dickey says the answer is yes. From the Daily News:

The revelations come during a year when cases of sexual abuse have dominated the sports landscape with molestation scandals at Penn State and Syracuse. Dickey said that those events have helped make it easier to come forward.

Dickey's book is excerpted in the April 2 issue of Sports Illustrated, which is currently on newsstands.
Posted by legalschnauzer at 6:02:00 AM

I am the product of physical and mental abuse. I am middle aged and believe you me..IT NEVER LEAVES..It is deep down and scarred. I probably would have committed suicide if I had been sexually abused. The mental and physical is bad enough and the demons torture me especially the mental abuse part.. I dont understand how someone can be allowed to live that sexually abuses children. That should be automatic death penalty and NO APPEALS.x

I don't understand why you focus so strongly on the fact that a subset of the children being abused are boys. Girls are abused, too. What's of primary concern is that abuse of children is entirely too common, not what the breakdown is between boy victims and girl victims.

You raise an important point, and I certainly don't mean to downplay the sexual abuse of girls; it might be even more pervasive than the abuse of boys, and it clearly is every bit as important. My focus on boys has been simply because they have been the victims in many of the national cases that have become known since the arrest of Jerry Sandusky. And of course, the Sandusky case involved boys. I have written extensively about the Dan Acker Jr. case here in Shelby County, Alabama, which apparently involves roughly 20 victims who were all girls. All of the other cases that I've become aware of over the past 5-6 months have involved boys--and that's why my coverage has skewed in that direction. But that is not to minimize the abuse of girls. I suspect the Acker case, when it goes to trial, will shine a major spotlight on that problem. And I will be on the lookout for other such cases. The sexual abuse of children, across the board, apparently is a much bigger problem than many of us ever dreamed.