How Many People Have to Die Before We Get Serious About Distracted Driving? 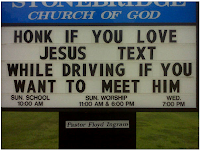 Do we have any hope of tackling a complex problem like global warming when we can't even handle the easy stuff?

I can't think of an issue that should be more easy to resolve than distracted driving. Anyone with a smidgen of common sense should see that it is uber dangerous to talk on a cell phone or send a text while trying to maneuver a vehicle. For those with no common sense, we have scientific evidence showing that talking on a cell phone while driving is the equivalent of being a drunk driver. (Texting and driving must equate to being unconscious behind the wheel.)

Want to feel secure the next time you are behind the wheel? Check out this study from the University of Utah: "A Comparison of the Cell Phone Driver and the Drunk Driver." It's scary, and it's from 2006; things have gotten much worse since then, with the proliferation of hand-held electronic devices.

If we know there's a problem, and it shouldn't be too hard to fix, why aren't we doing something about it? Why do we keep reading stories like this one out of Alabama last week? The headline: "Texting Blamed in Deaths of Mother, Infant Son on I-65."

From The Birmingham News:

A young woman who was texting as she drove on Interstate 65 in Chilton County lost control of her car and crashed Thursday night, killing herself and her 10-month-old son, authorities said.

Randreaita Coleman, 18, was pronounced dead on the scene.

Her son, Carter, was taken to an area hospital where exhaustive resuscitative efforts were performed, but he was basically dead upon arrival, said Chilton County Coroner Randy Yeargan.

Did Coleman have her mind on driving, the task at hand, when the crash occurred? Evidence at the scene indicates she was focused on something else:

An investigation showed Coleman was texting while driving when she lost control of her car.

Authorities said Friday her phone activity showed she had been having a text conversation for about two or three minutes before the crash and still had a message on the screen that she had typed but not yet sent when they recovered the phone after the crash.

What would it take to bring distracted driving under control? First, we need laws to make it unlawful to talk on a cell phone or text while driving a vehicle. And the laws need serious teeth; minimal fines aren't going to cut it. I would suggest a three-month suspension of a driver's license for a first offense, six months for a second, and one year for a third.

We have addressed this subject in previous posts, noting that both the U.S. Senate and the Alabama Legislature have tried to pass bills on driving and texting. So far, they have failed. Bills to outlaw driving while talking on a cell phone apparently cannot even be discussed.

State Rep. Jim McClendon (R.-Springville) has led the effort to fight distracted driving in Alabama. How difficult has it been? His measures have failed five times, and this summary pretty much sums up the hurdles involved.

If there is any positive out of the Randreaita Coleman story, it's this: At least she did not kill another driver. But think about her infant son, who barely had a chance to live. Was his mother's text message really that important?

As we ponder that sobering question, let's consider a few others: Is our frantic, hyperactive, multitasking society driving too many of us to early exits from this earth? Will we ever "Learn To Be Still"?

During the last two years there have been efforts to pass a law banning texting while driving. Both have failed dur to intense lobbying. The news reports I have seen do not tell who these lobbyist are. It would be good to be able to indenify them

Good points. I assume the cell-phone/tech lobby must be powerful. You would think the insurance lobby would fight back because they are the ones who often wind up paying for these car crashes. Wonder why insurers seem to be so quiet on this.

For real! I've had several close calls this year alone. It was already bad enough when half the folks wouldn't get an earpiece or speakerphone & had one hand off the wheel. Now, I see people driving, wait, FLYING LOW on the highway while texting with BOTH hands on the phone, holding the wheel with their knees.

It's a dream for a personal injury firm!

Considering how hysterical America is about the "dangers" of drunk driving, the fact that talking on the cell phone while driving isn't illegal (except in California) is proof of America's hypocrisy. Is there ANYTHING that we're not hypocritical about?

...and yes, I put dangers in scare quotes. Why? Because I have never had a problem with a drunk driver (I see live music a lot and am frequently on the road around 2 am) but not a week goes by where I'm not in a near wreck with someone talking on the phone while driving. To me, it seems pretty obvious which one is more dangerous.

Well, let's just all thank the government for protecting us from our own stupidity! Come on, Schnauzer! Don't you believe in Natural Selection?