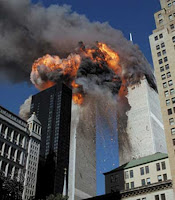 Millions of Americans took a moment for reflection yesterday on the 10th anniversary of the 9/11 terrorism attacks.

Those remembrances surely were genuine, offered with a heavy heart for those who were killed and a sense of resolve for the threats facing our country. We suspect, however, that many of yesterday's meditations were misguided, at least in the threats category. And our prayer is this: That we will come, in time, to recognize what truly eats at the foundations of our republic--and it has little, if anything, to do with planes flying into buildings.

No one should be surprised that George W. Bush, the man who served as president on 9/11, was among those with a warped perspective. After all, it's people like Bush himself--and the innumerable corrupt politicos he helped unleash--who truly have shaken our republic to its core. Bush has a vested interest in helping to ensure that many Americans never come to grips with that. Our  hope is that citizens of all stripes, from coast to coast, will one day figure it out.

Of this we can be sure: On a weekend for dedication, the deception about 9/11 continues. Consider Bush's words from Saturday's service near Shanksville, Pennsylvania, for the Flight 93 National Memorial. Bush framed 9/11 as "the moment America's democracy was under attack."

Is that what really happened on that awful day? September 11 will forever represent an attack on our borders, on our financial and governmental infrastructure, perhaps even on our way of life. But an attack on our democracy, on the ideals that form the underpinnings of our society? That can only come from within. Such an attack started well before 9/11, and it has continued to this day.

George W. Bush and other like-minded elites want to make sure regular folks never grasp the nature of an insider attack that could bring America to her knees.

Do you want a date that truly represents a threat to our democracy? I will give you one--and it comes from deep in the heart of Alabama, my home state. It's October 20, 1995, the day a man named Perry O. Hooper was sworn in as the first Republican chief justice of the Alabama Supreme Court.

Hooper's swearing in marked the successful launch of a campaign--funded largely by the U.S. Chamber of Commerce and orchestrated by two relatively unknown GOP operatives--to take over state high courts. Who were the GOP operatives? One was William Canary, head of the Business Council of Alabama. The other was Karl Rove, who already had a reputation for dirty tricks in Texas but had a low profile on the national stage.

The 1994 race between Hooper and Democrat incumbent Sonny Hornsby is brilliantly chronicled in a piece titled "Karl Rove in a Corner," by Joshua Green of The Atlantic. Green's article might be the most important piece of political journalism of the past 20 years, providing details about an election that would presage much of what would happen over the next 15 years.

Why does the Hooper v. Hornsby battle mean so much? The first two vote counts had Hornsby, the Democrat, winning an exceedingly tight race. But after months of recounts and court battles, going all the way to the U.S. Supreme Court, critical absentee ballots were excluded and Hooper, the Republican, was declared the winner.

Rovian Republicans obviously learned from Hooper v. Hornsby--lessons that would pay off big time down the road. What were those lessons? That judicial seats could be bought, that election results could be manipulated, and the justice system could be used as a political weapon.

That last lesson would lead to the U.S. attorney firings and the political prosecutions of Don Siegelman, Paul Minor, and others during the Bush years.

I see frequent evidence of this here in my little corner of Alabama. As the fallout from a 10-year legal battle that is chronicled on this blog, my wife and I currently are parties to several federal lawsuits. In recent weeks, I've received rulings from federal judges that are grotesquely and blatantly at odds with the relevant law. I've seen sworn testimony from multiple parties that is demonstrably false, but it seems to be  presented in the secure belief that such antics will not be punished. Perhaps the rogues are right; I've presented irrefutable evidence to the court that the testimony is false, only to see no action taken.

This is the real world of American "justice" today. In the coming weeks, we will be reporting in detail about what Mrs. Schnauzer and I have experienced in court. And it goes way beyond us. Thanks to this blog, we have gotten to know numerous individuals who also have been victimized by corrupt judges and lawyers. We will be telling their stories, too. In fact, we already have told portions of their stories, but we soon will provide details that should test the gag reflex of anyone who truly cares about justice.

Of all the people who have been quoted about the 10th anniversary of 9/11, I suspect no one gets it quite like Valerie Plame Wilson, the former covert CIA officer who was outed as part of the Bush administration's effort to deceive the public about the war in Iraq.

Wilson is featured in Time magazine's commemorative "Beyond 9/11" issue that is on newsstands now. In it, Wilson utters perhaps the most profound words I've seen so far related to 9/11:

We live in what I believe to be the greatest democracy in the world. With all its failings, it's still the best model that we've come up with, and it is really imperative that people take the last decade and the lessons learned and make sure that you apply them and hold your public officials to account.

George W. Bush, Karl Rove, Dick Cheney, and their brethren are desperate to make sure that doesn't happen. They want Americans to believe that airplanes and men with box cutters and funny sounding names can bring down our democracy.

Valerie Plame Wilson is too smart to fall for that rubbish. Let's hope that millions of Americans will eventually take her words to heart.
Posted by legalschnauzer at 10:16:00 AM

"Do you want a date that truly represents a threat to our democracy? I will give you one--and it comes from deep in the heart of Alabama, my home state. It's October 20, 1995, the day a man named Perry O. Hooper was sworn in as the first Republican chief justice of the Alabama Supreme Court."

As the young people say Word!

Why do you include a link to my site (suzyrice.com) as to the Shanksville, PA speech by former President George W. Bush, when, on my site is a link to the original (video) content of that speech and another article about that speech?

It appears you are linking to my site for this content for derogatory purposes about my site, to include it in some needlessly derisive effort to hack away at former President Bush for your own political differences with him.

I have banned referrals from your site to mine so you might want to improve your approach to linking to others' content: try linking to the original content instead of using political issues (or, persons in this case) you disagree with to try to defame innocent third parties ("innocent third parties" in the sense that me and my site have no relationship to you and yours and if you sincerely want to deride the former President, then link to his content, not to my site, unless, of course, your motive is to malign me for reasons unknown to me).

I linked to your site because it was one of the first ones that came up when I did a Google search re: the contents of former President Bush's remarks at Shanksville. I mean nothing derogatory about you or your site. In fact, I didn't know if you were pro-Bush, anti-Bush or somewhere in between. I linked to your site as a news source about the contents of Bush's speech. There is nothing remotely defamatory in my post about you or your site. How you could come to such a conclusion is beyond me.

1995 - 16 years ago. The year I moved to Montgomery where I would watch the Radical Republican takeover of the state appellate courts first hand. Then there was W's recess appointment of Bill Pryor to the Federal Appeals Court in Atlanta after Pryor took the extremely Radical Republican Roy Moore off the playing field. You can't depend on federal appeals anymore. They own that racket too. This country inches closer to Civil War Two with every passing year.

I came to my conclusion as stated. If you'd read what I originally commented, you wouldn't need to express how lost you are in wondering "how (I) came to (my) conclusion".

I see you've cross-posted your overtly emotional article to some "oped news" site, while also repeating your links to my site. You really should improve what you link to as to the content you cite for critical purposes and try to knock-off the personal attacks on random public figures such as myself (by insinuation or assumption).

Since you don't mind giving me advice, I will give you some.

If you are hyper sensitive about who reads your blog, links to your blog, or finds your blog on Google, you might want to put it on a privacy setting so that only pre-approved readers can access it.

I understand that this is very easy to do. That your blog showed up No. 1 on my Google search tells me that you have taken steps to make sure it shows up to the general public, that you want it to be seen. So why are you griping when a member of the general public refers to it?

It's very common for right-wing sites to link to Legal Schnauzer and then proceed to attack me by name. Happens all the time. Do I care? Nope. I put my work out there for public consumption, so I should expect that.

For the record, I never mentioned you or your site--merely provided a link to your site as a news source. That you would make an issue of that is pretty amazing. And you refer to my work as "overtly emotional"? Have you ever heard of the pot and the kettle?

For the record, the piece also has been cross posted at Open Salon, FireDogLake, and Daily Kos. It also was picked up by BuzzFlash. And they all include links to your site.

This might horrify you, but I'm guessing you will survive it.