Did I Just Receive a Death Threat Via E-Mail? 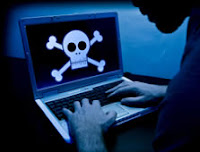 At 6:55 p.m. yesterday, I received an anonymous comment on this blog that reads as follows: "Yours is coming- Don't Worry."

The comment was in response to a post I published last Tuesday (August 23), titled "Death of a Bush-Era Prosecutor Prompts Deep Thoughts On the Hereafter."

Anonymous threats, unfortunately, are not an uncommon occurrence around here. In fact, I've written several times about threats, most recently in a July 18 post that includes a roundup of the various charming messages we've received through the years.

I've always taken threats seriously, but not so much that I've ever reported one to authorities. This time, it might be different.

Two primary questions are in my head at the moment: (1) Where did this message come from; (2) Did the sender commit a crime? We will be examining those questions shortly, but first a few details.

On the surface, "Yours is coming--Don't Worry" sounds relatively tame. In fact, I've received other messages with similar wording, often misspelling the word as "comong." Why is this one more alarming than the others?

One factor is the timing. I'm convinced that quite a few of the threats I've received have been political in nature, from someone who did not appreciate my reporting on public or governmental events. I believe those messages largely were meant to threaten my wife and me in an economic sense--and in fact, we both wound up being cheated out of our jobs, me at the University of Alabama at Birmingham (UAB) and her at Infinity Property and Casualty. Those thugs can't accomplish much more on the economic front; after all, we no longer have jobs, and we even have a bogus sheriff's deed on our house. What else can they do?

Second, is the nature of the blog post that prompted the threat. It was a post about death, specifically the death of a former Bush-era prosecutor in Mississippi named Dunn Lampton and the death of an unnamed neighbor who played a relatively minor role in the harassment Mrs. Schnauzer and I have experienced for 10-plus years.

When an anonymous commenter says "Yours is coming--Don't worry" on a post about death . . . well, that has a sinister sound to it--and it didn't take me long to spring into action.

I already have gathered data that provides numerous hints about the origins of the threat. And this much is clear: The same individual posted two other comments on the August 23 post. Here they are:

Those came from the same IP address as the threat in question:

Other data suggests the threat came from someone who lives near me, maybe very close to me. And that's another reason I am taking this one with extra seriousness.

When I first started receiving threats on Legal Schnauzer, I was pretty clueless in the techno department and had no real way to track them down. But I've become a little more sophisticated. I have blog analytics that can provide clues about the source of a threatening comment. And geolocation services can help trace the physical location of someone who is harassing or threatening you.

Geolocation technology is not flawlessly accurate, but the data I've gathered so far seems to have narrowed the source to a tight geographic area.

I'm guessing it came from someone whose unlawful acts have been exposed on this blog. And I'm pretty sure it's from someone who lives nearby and might wish to do me physical harm.

Has the sender committed a federal crime with his little message? My research indicates he has come close to crossing the line.

More on this threat, my investigation of it, and the applicable law is coming soon.

I'm not naive enough to think they won't get me someday, but I won't go down without taking at least one of them down too. My premature death will come at a price.

They know I carry guns as well as knives & the USMC taught me how to fight with my bare hands. The belt I wear doubles for a garrote & I know all the pressure points in the human body by heart.

"That motherf@cker is one crazy son of a b#tch. We suspected he had a gun, but he's got +p loads in the clip. Bastard's also got a derringer for backup & a taser.

After we found the knife, the pepper spray & the criminal procedure textbook in the back seat of his car, we stopped looking and decided not to f%ck with this guy. You're going to have to send one of your Troopers or an ABC Agent if you want him because he's going to sue somebody if they don't kill him.

Didn't take long for the Schnauzer nose to spring into action sniffing the anonymous coward out of what he thought was his well hidden lair.

I like your style; I've always liked your style. (A hat tip to "Witness.")

Not surprised. Your opponent is a coward and not to terribly bright. Keep us posted as you run them to ground. I keep waiting for them to "get theirs" so to speak given what they have put you through.

It makes me sick to see a bunch of keyboard kommandos fire off threats like these from the safety of their Internet connections. Do these guys really think that they can't be tracked down and dealt with in real life?

Good on you for protecting yourself. When you're dealing with anonymous nutcases, you can't afford not to.

I also like to quote the IRA guy from "the Quiet Man":

If I ever considered you a REAL threat to me,

"Not a scorched stone of your fine house would be standing."