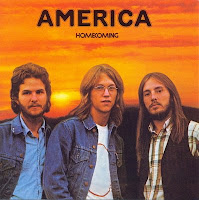 You must be getting old when your rock-star heroes start dying . . . of natural causes.

We all know rock stars are supposed to die in their 20s--from drug overdoses, car wrecks, airplane crashes, shootings, or some other form of mayhem. But that did not happen with Dan Peek, a founding member of the '70s mega group America. He died in his sleep, in the rural farmhouse he called home. You might even say Peek died of old age--although at 60, he hardly was old by today's standards.

Peek's death was announced last week, with the funeral on Monday, and it hit close to home here at Legal Schnauzer for several reasons. America was one of my favorite groups, serving as a sort of bridge from the folk-rock artists of the '60s (Buffalo Springfield, Crosby Stills Nash and Young) to the country rock of the '70s (Eagles, Linda Ronstadt). America also served as a bridge from the Beatles to the next generation of rock and roll; George Martin, the famed producer of the Fab Four, produced five of America's albums.

America was perhaps the most omnipresent act of my teen years. When I was 15, in the summer of 1972, it was hard to turn on the radio without hearing "A Horse With No Name." The same was pretty much true one year later with "Ventura Highway."

The members of America--Peek, with cofounders Dewey Bunnell and Gerry Beckley--were "military brats" who lived all over before meeting in London and developing a base in California. But I always think of them as having Midwest roots. I still have fond memories of seeing America in concert during my freshman year at the Hearnes Center on the University of Missouri campus. It was the second or third concert I ever attended. (The first was the Ides of March, of "Vehicle" fame, at the Shrine Mosque in Springfield, Missouri; the Beach Boys in Columbia, Missouri, were the other--I can't remember which came first, the Beach Boys or America. All three acts were splendid live performers, to my youthful ears.)

Peek, ironically enough, died in the nation's heartland. He had a home for years in the Cayman Islands, but his main base became a farm in Farmington, Missouri, which is about 60 miles south of St. Louis and 160 miles northeast of where I grew up.

After several years of drug abuse and hard living, Peek left America in 1977 and became a solo artist, focusing mostly on contemporary Christian music. Bunnell and Beckley soldiered on as a duo, but America never regained the heights it reached when Peek was in the band. A reunion of the three founding members had been rumored for years, but it never happened.

America was a distinctive band for several reasons. Almost all of their albums had one-word titles beginning with "H"--Homecoming, Holiday, Hearts, Hideaway, Harbor. That became a sort of inside joke among the band and its many serious fans. All three members sang lead, and their voices often meshed into gorgeous harmonies. All three members were accomplished song writers, almost always working individually, without collaboration from the others.

The first of Peek's tunes to become well known, and perhaps my favorite in the America catalog, was "Don't Cross the River," from 1973. That's Peek on lead vocals in the middle, with Beckley ("Sister Golden Hair," "I Need You") to his right and Bunnell ("A Horse With No Name," "Ventura Highway) to his left:

Another Peek tune was the classic "Lonely People," which hit No. 5 on the singles charts in 1975. The song's hopeful lyrics reportedly have steered countless people away from despair, even suicide:

Peek also penned "Today's the Day," a 1976 tune that proved to be the band's last major hit as a trio:

Peek also wrote some of the most memorable album cuts in the America catalog, with nature and faith being common themes. One of my favorites is "Saturn Nights" from 1972's Homecoming:

It's heartening to know that Peek found peace in his post-America life. As for Peek's solo career . . . well, I've never been much of a fan of contemporary Christian music. I'll take a classic hymn--"Morning Has Broken," "God of Our Fathers," "Holy Holy Holy"--thank you very much. But Peek did some good stuff. His "All Things Are Possible" has that classic America sound and probably would have been a top-20 hit if he had released it with the band. Enjoy:

A great loss. "Horse With No Name" was THE song to go with your "fine china." Many a law student got through finals while riding the horse or shooting the speed ball.

LOL, Rob. I remember the rampant rumors about "A Horse with No Name" being a drug song. I gather "horse" is a slang term for heroin? Also remember America taking grief because the vocal sounded so much like Neil Young. In fact, I think many a DJ introduced the song as "the new single from Neil Young." Oops.

Neil Young, the guy who was loved by Lynyrd Skynyrd & the Bama Boys, but Neil is just alright with me like Jesus was with the Doobie Brothers. Speaking of doobies, I need to move to California, get my medical marijuana card & fly in to Montgomery each morning when I take the bar exam.

How could "Horse" not be a drug song with lyrics like “There were plants & birds & rocks, & things” or “Cuz there ain't no one for to give you no pain?”

You've got to be high to think that way, but strangely enough it's that sort of thinking that opens the doorway to getting an A on your final exam, especially when you're getting graded on the curve with 100 other folks.

To speak to a question Keith Norman asked me six years & two months ago, the most creative people in the legal field (including several judges & practicing lawyers) did drugs all the way through college & law school & he knows it.

As Aries Spears aka Dollar Bill Montgomery used to say, "That's some real Mother$u@%ing talk. Next week our guest is President Barack Obama with a rap about how Weed helped him expand his mind enough to become a law professor.

Dan Peek was born in the Florida Panhandle in Panama City.

You know, I went to my first concert when I was 11. It was ZZ Top in Daytona Beach FL.

Those moments stick with you, James. America, in Columbia, MO, was the third concert I ever saw--and that's partly why Dan Peek's death really hit home.

Geez... shocked to admit, but my first two concerts in the 80s were Osmond Family & Rick Springfield! LOL.- I did see a reunion of the Doobie Brothers in my 20s and I had just learned what "doobie" meant! Uh yeah, sheltered life for sure!! ;)