Is the South Less Conservative Than You Might Think? 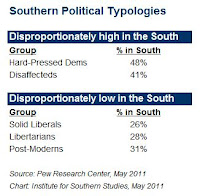 The press often portrays the South as a place where white voters hold rock-solid conservative values that often carry the day for the Republican Party. But a new analysis from the Pew Research Center shows that politics in the Deep South are more complicated than that.

Chris Kromm, of the Facing South blog at the Institute for Southern Studies, reports that Pew has identified at least nine political "types" in the United States, with none accounting for more than 14 percent of the public. The Pew study, titled "Beyond Red and Blue: The Political Typology," finds that two groups are disproportionately large in the South: "Hard Pressed Dems" and "Disaffecteds."

Pew's findings are especially interesting for the South. It's often assumed that Southern states -- especially Southern white voters -- are inherently conservative, and the region is only dipping into blue state territory thanks to transplants and immigrants.

There's an element of truth to that, but Pew's surveys have consistently shown that the Southern electorate is much more conflicted and complicated than many realize.

For example, Pew's survey identifies two groups that are disproportionately large in the South: "Hard-Pressed Dems" and "Disaffecteds." While Southerners made up 37 percent of Pew's survey respondents, those two groups were over-represented in Southern states,

What are "Hard Pressed Dems"? Pew says they are largely blue-collar workers who are "struggling financially" and are "generally cynical about government." Writes Pew: "Nearly half (47%) expect that they will not earn enough to lead the kind of life they want. Socially conservative and very religious."

Sounds like a lost cause for progressives, right? Well, maybe not. In fact, "Hard Pressed Dems" are disproportionately female and African-American. Writes Kromm:

One of the most striking findings: Only 16 percent of this group agree with the statement that "most corporations make a fair and reasonable profit" -- a view that would seem to make them amenable to consumer and labor reform if those don't get trumped by the "socially conservative" issues on Election Day.

What about "Disaffecteds"? Pew says they are "very critical of both business and government." They are sympathetic to the poor and supportive of social welfare programs, but they are pessimistic about their own financial futures. Writes Pew: "A majority believe that the government is wasteful and inefficient and that regulation does more harm than good. But nearly all say too much power is concentrated in a few companies."

"Disaffecteds" are largely white and are unlikely to see Democrats, or any political party, as the answer to their problems.

On the surface, the South sounds like a jumbled mess. But Kromm says progressives should not be too quick to write off the region:

My guess is that this points to the conflicted views Southern whites hold about government. But, as with everything else, that issue isn't cut-and-dry, either: Notice that Southerners actually rank low on the "libertarian" category, the group with the most animosity to government involvement in public life.

The upshot: Despite what the Tea Party or libertarian think tanks might say, many Southerners still see a role for government in resolving the problems they and their communities face.