How To Fire An Employee--and Not Get Sued 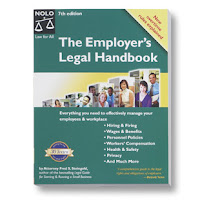 If you ever get cheated out of your job, as Mrs. Schnauzer and I have been, here is one of the first truths you will learn about the employment-law racket: For every lawyer who represents plaintiffs in employment cases, there are probably a dozen who represent defendants.

In fact, that ratio is way too conservative; it probably should be more like 1:25. That so many more lawyers would rather represent business types than regular people says a lot about the legal profession. It tells you that there is more money to be made from representing people who commit wrongs than representing the victims of wrongdoing.

That's not to say that all employment complaints are meritorious. My guess is that a fair amount are weak or downright bogus. But I would also suggest that quite a few, maybe half (just to put a general number on it), are solid to very strong. Certainly you wonder how the legal profession justifies the lopsided ratio in favor of lawyers who represent defendants.

Here is another truth you will quickly learn: Many law firms that represent plaintiffs in employment cases are one- or two-person shops, with limited resources; most of the firms that represent defendants are the biggies, the kind who can throw four or five lawyers at you and almost bottomless resources. In Birmingham, outfits like Bradley Arant, Haskell Slaughter, Balch and Bingham, Maynard Cooper and Gale, Sirote and Permutt, and Burr Forman all have "labor and employment" sections that represent only defendants.

Based on my quick research, it appears these firms have anywhere from 12 to 30 lawyers who specialize in labor and employment law. Combined, that is more than 100 lawyers, just in six Birmingham firms, who represent only defendants in employment cases. I might need to rethink that 1:25 ratio.

All of these firms have Web pages that feature high-minded rhetoric about how they want to help management avoid employment problems before they get started. That sounds reasonable. But this information apparently never made it to the two places where Mrs. Schnauzer and I worked--Infinity Property and Casualty and the University of Alabama at Birmingham (UAB). In fact, I would bet this information never makes it to many employers--or the employers who do have it willingly ignore it.

My favorite bit of advice for management types comes from the Birmingham firm of Leitman Siegal Payne and Campbell. It's titled "Ten Rules on How to Fire an Employee--and Not Get Sued." I like a law firm that doesn't pussyfoot around. And you have to admire the sense of "underhanded honesty" that is inherent in that title. (You can read the document at the end of this post.)

We already have written about the utter cluelessness UAB's in-house counsel and HR types exhibited in my termination. Now we will go into more detail, looking at how both UAB and Infinity failed to take the simplest steps to avoid employment problems before they started.

In fact, we will show that both UAB and Infinity seemingly went out of their way to create problems where none existed. And we will grade these august organizations on each of the 10 rules. Trust me, it's going to get ugly.


How to Fire an Employee--And Not Get Sued
Posted by legalschnauzer at 11:30:00 AM

I feel so bad for you, Mrs. Schnauzer and all the other liberal/Democratic Alabamians who have been legally lynched. I beginning to the Justice for all is just an illusion, all hat and no cattle.

For every lawyer who represents plaintiffs in employment cases, there are probably a dozen who represent SPOILED BRAT BILLIONAIRES.

The criminal lawyer- David W. Bouchard - seems to have an extremely close relationship with Erik Prince.

*
One defendant in the Nicholas attack did not appear in court Wednesday because his attorney, David Bouchard, alerted the court that he is stuck at sea trying to cross the Atlantic in a sailboat.

WASHINGTON — Erik Prince, whose company, Blackwater Worldwide, is for sale and whose former top managers are facing criminal charges, has left the United States and moved to Abu Dhabi, according to court documents.

"Peer review"? Ha! What a joke! Any "peer" who expects to keep his or her position with the company would be a fool to make any finding other than 100% support for the company! Most large companies such as UAB and Infinity act in a heavy handed manner out of arrogance born of political clout. At the end of the day, the one with the most power wins. End of story.

Why would the criminal lawyer - David W. Bouchard - be protecting the criminal Erik Prince? I would imagine to keep their criminality "all in the family."

He was he confined in Fort McHenry, and immediately sued out a writ of habeas corpus.

The writ of habeas corpus is something that comes to us from English common law, and was the means by which one who was arrested or confined by governmental authority could ask a court to require the person holding him in custody to show cause why he was being held. The court would then decide whether there was sufficient reason to hold the person, and if there was not would order him set free. It has been rightly regarded as a safeguard against executive tyranny, and an essential safeguard to individual liberty. The United States Constitution provides that the writ of habeas corpus shall not be suspended, except when in time of war or rebellion the public safety shall require it.

Hamdi was initially held at Guantanamo Bay, but then transferred to a naval brig in Norfolk, Virginia.

Esam Fouad Hamdi has filed a petition for a writ of habeas corpus as next friend of his son, Yaser Esam Hamdi, a detainee atthe Norfolk Naval Station Brig who was captured as an alleged enemycombatant during ongoing military operations in Afghanistan.

Nine days after the necessary catastrophic event arrived on September 11, 2001, PNAC urged Bush to remove Saddam Hussein from power, even if no evidence could be found to tie him to 9-11. Saddam Hussein and al-Qaeda were known enemies.

They need to feel the fear of a Black Cat http://www.iww.org/en/content/iww-kat