How Low Will Debt Collectors Go--in Alabama and Beyond?

Just when you think you've heard the worst from bottom-feeding debt collectors, the industry takes itself to a new, even lower, level.

We have reported several times about the debt-collection industry, most recently with this post about an expose by Dateline NBC. Now we have two cases of even more egregious activity--one from afar and one that is up close and personal.

The distant case comes to us from Buffalo, New York, where state attorney general Andrew Cuomo has arrested 12 workers at a debt-collection agency on charges of grand larceny and extortion.

Let's be clear about this: These folks are not charged with civil violations of the pathetically weak Fair Debt Collections Practices Act (FDCPA); they are charged with crimes. Andrew Cuomo, who was prominently featured in the Dateline NBC story, means business. Let's hope his approach to law enforcement spreads to other states. It's needed badly in Alabama.

How bad was it at the Buffalo firm, owned by Tobias Boyland? The Buffalo News reports:

The individuals, who are accused of extortion, allegedly participated in improper and illegal debt-collection practices, posing as law enforcement officials and threatening to have consumers thrown in jail unless they immediately paid off debts they supposedly owed, state Attorney General Andrew M. Cuomo announced.

Cuomo did not go after just the executives or owners of the firm. He went after the workers:

"The tactics allegedly used here are some of the worst of the worst in the debt collection business," Cuomo said in a press release. "The defendants' alleged lies, deceit and intimidation caused many innocent people to pay money they didn't owe just to stop the terrifying calls."

How is this for irony? In a Buffalo News photo of the workers being led away in handcuffs, one is wearing a University of Alabama sweatshirt. Check it out: 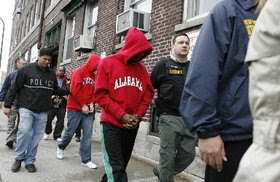 Which brings us to the case that we've experienced in an up close and personal way. A little more than a year ago, Mrs. Schnauzer and I filed a lawsuit alleging multiple violations of the FDCPA. The alleged debt was from American Express, and the defendants in the debt-collection lawsuit are Pennsylvania-based NCO Financial Services and Birmingham law firm Ingram & Associates LLC.

Over the past month or so, we have been engaged in the discovery process, trying to get at the facts about the alleged violations and who is responsible for them. Are debt collectors, and the law firms that represent them, happy about turning over such information?

Not exactly. In fact, substantial evidence suggests that they have taken some astounding steps to threaten us into accepting a bad settlement and shutting down our discovery efforts.

Why would they do that, particularly in our case? One, this is not a "he said, she said" case. I audiotaped my conversations with debt-collectors, so we have hard proof of their violations. Second, I suspect the tactics revealed in our audiotapes are used by numerous debt collectors--and perhaps encouraged by credit-card companies--to unlawfully separate consumers from millions of dollars.

My guess is that we are close to uncovering some ugly industry secrets. And that is why, I suspect, the debt collectors have waged a fierce attack on Mrs. Schnauzer and me--using tactics that might be criminal and certainly violate federal civil-rights law.

Who are the suspects in this dirty deed? Well, you have several lawyers representing NCO Financial Services--including Laura Nettles of Lloyd Gray & Whitehead (Birmingham) and Dayle Van Hoose of Sessions Fishman Nathan & Israel (Tampa). You have a lawyer representing Ingram & Associates--Wayne Morse Jr. of Waldrep Stewart & Kendrick (Birmingham). God only knows how many executives at NCO might be involved, driving the sleazy train.

Here is what's really interesting: It appears that entities from outside the lawsuit have been enlisted to help apply pressure to us. We are talking specifically about Infinity Property & Casualty Corporation, a Birmingham-based insurance company that has taken some highly irregular and unethical steps in our direction.

What are these folks trying to hide? Whatever it is, they seem to be trying mighty hard to hide it. And I wouldn't be surprised if it involves American Express itself, even though the company is not a party to the lawsuit.

As we have reported in previous posts, original creditors often wind up selling their bad debt to third-party debt collectors. There are all kinds of legal and tax incentives that encourage original creditors to do this. But we are being told in our lawsuit that American Express did not do that in our case, that it owned our alleged debt all along. If that's true, why did American Express do that? And does the company handle all of its accounts that way? If so, why?

A curious note: American Express just happens to be in the Property and Casualty business, through its subsidiaries AMEX Assurance and IDS Property Casualty. Infinity wouldn't be trying to provide cover for a fellow traveler in the P & C insurance business, would it? Hmmm.

Mucho more details are to come. But for now, let's revisit this question: How low will debt collectors go?

Our experience says the answer is, "Real, real low."

That Buffalo story might be nasty. But you ain't read nothing yet.

Great Post. I look forward to reading "the rest of the story" as Paul Harvey would say.....