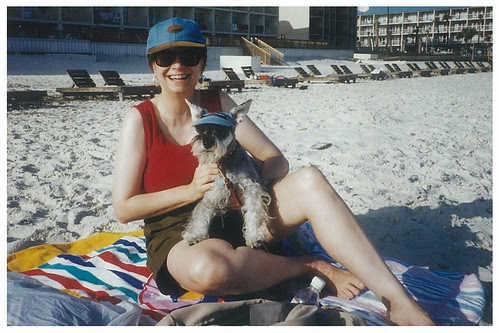 Here is another in our series about the real Legal Schnauzer, our wonderful girl Murphy (1993-2004), who helped us survive the worst of our legal nightmare and serves as the inspiration for this blog.

This is Murphy and her "mom" at the beach in Gulf Shores, Alabama. Notice the matching mother/daughter hats. (Yes, we freely admit that we were "nuts" about Murphy, and this photo proves it.) Also notice Murphy's ears in their straight up and out style. We called this her "Flying Nun" look. (Those of you too young to remember The Flying Nun sitcom probably won't get the joke. Maybe this will help explain it.)

Just how nuts were we about Murphy? My wife bought a baby carrier for the trip and used it to carry Murphy with us on strolls along the beach. Talk about a show stopper!

People from all over the country--Kansas, Nebraska, Wyoming, you name it--stopped to talk about our "schnauzer in the baby carrier." A number of folks took pictures of Murphy in the baby carrier. "We've got to show this to our friends back home," they said.

We talked for a long time with a man who was a widower and appeared to be in his early 60s. While his wife was living, she had gotten a miniature schnauzer. The man liked the dog OK, but he had considered it his wife's dog and didn't pay a lot of attention to it. But after his wife died, the man was amazed at how attentive and caring the dog was toward him. In their shared grief, he and the schnauzer became inseperable. "It's almost as if the dog knew I was broken hearted and was trying to help me heal," the man said through tears. "That little dog taught me a lot about the true meaning of love."
Posted by legalschnauzer at 11:00:00 AM