Right-wing extremist Proud Boys show up without a permit to march and disrupt an event designed to promote small-business shopping on Long Island, NY 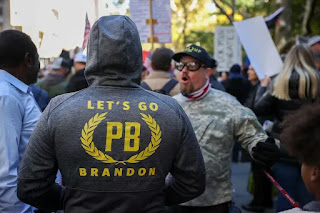 Members of the Proud Boys marched at an event over the weekend designed to promote shopping at small businesses on Long Island, NY.  From a report at Salon, under the headline "Proud Boys terrorize Small Business Saturday shoppers on Long Island":

The march took place in the Village of Rockville Centre, on the South Shore in Nassau County.

"Members of the group marched down Sunrise Highway, waving American flags and 'Don't Tread on Me' flags and playing music from the back of a pickup truck," Newsday reports. "Some store owners appeared surprised and alarmed by the demonstration, while diners expressed concerns about the group coming to the community."

Were the Proud Boys a welcome sight in Rockville Centre? Not exactly:

Judy Griffin, a Democrat who represents Long Island in the New York State Assembly, said the Proud Boys did not have permits for the march and didn't give the village notice about it, adding that the event seemed intended to disrupt Small Business Saturday.

"They're a divisive group of hate and violence," Griffin said. "They don't have any place here. I'm all for freedom of speech, but this group doesn't have a very good track record and seem to come to communities to incite problems and polarize."

Democratic state Sen. Todd Kaminsky posted video from the march on Twitter, writing: "The Neo-fascist Proud Boys marched through Rockville Centre today, close to my office. I think the latest elections emboldened them -- I don't remember this happening before. I will not be silent. Their hatred has no place here --this is not the Nassau I know. Who else will speak up?"

Did Long Island residents have reason to be concerned about the presence of Proud Boys on their streets? Considering that Forbes reported in April that 25 individuals associated with the group have been arrested in connection to the Jan. 6 insurrection at the U.S. Capitol -- and the number surely has gone up since then -- the answer appears to be yes.

What's wrong with these clowns? Don't they have something better to do with their lives?

If they didn't have a permit, why didn't local police lock them up? They must have been violating some kind of ordinance.

Maybe the cops liked having them there. Maybe they saw a need for more "White chauvinists" in the community.

I hear the Ace Hardware on Long Island was selling screwdrivers to Brown people, so the Proud Boys had to put a stop to that.

How much did the Proud Boys pay the cops not to show up?