Stealing Our Democracy: With a keen eye for detail and a gift with words, Don Siegelman brings humanity to one of the ugliest stories in American politics 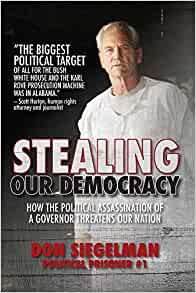 Stealing Our Democracy: How the Political Assassination of a Governor Threatens Our Nation, by Don Siegelman, NewSouth Books (2020)

As the only person to hold all four of Alabama's statewide elected offices, Don Siegelman's political skills are well documented. But with Stealing Our Democracy, Siegelman shows that he's also a darned good writer. The book focuses on Siegelman's roughly 12-year sojourn through America's treacherous federal justice system -- in a case that, evidence suggests, was driven more by politics than actual criminality.

To be sure, this is not joyful subject matter -- and it could make for a grim read. But with the eye of a journalist and the heart of a novelist, Siegelman finds humanity along the way.. He even introduces us to some charming four-legged characters. Siegelman has every right to be bitter, but he does not come across that way. Does his anger flash at times? Yes. Does he think our country -- which has given him a close-up view of its ugly backside -- is hopelessly broken? No.

Siegelman manages to find humor in the most unlikely places, such as the United States Penitentiary Atlanta -- the oldest maximum-security federal prison in the country, affectionately known as "The Dungeon." That's where Siegelman and Scrushy were transported immediately after sentencing in Montgomery. Consider this scene from their first day in prison:

A guard told us we'd be given some time to shower and to turn in our jumpsuits, T-shirts, socks, and underwear for clean ones. He pointed to a pile of clothes on the cement floor outside our cell. "Find something that works. There's only enough for you inmates in solitary."

The door swung open. Shower time. It was a one-man shower with a floor of rotten wood. I picked out clean clothes, as did Richard.

A guard arrived as Richard was trying on a pair of the pants.

"These pants are baggy," Richard said, then tried another pair that were too snug. He asked the guard for advice.

"All I can tell you is, I'd go for the baggy ones. You might get the wrong kind of attention around here with those tight ones on."

Siegelman learned on his first night in prison that he was in a place way different from anything he had experienced before. He and Scrushy were locked in a small cell in solitary confinement in the basement, given a sheet and small blanket.What was that first night like?

My sleep was troubled. I awoke to sounds of inmates screaming high up on other levels, then footsteps and unfamiliar noises. Was it morning? Two trays had been pushed through the slot in the bottom of the door. Coffee, a half pint of milk, and a small box of cereal. I tasted the coffee and after I saw Richard drinking his, I offered him mine. We swapped. My coffee for his milk.

I was living on prison time now. I had no control. No contact with anyone outside these walls.

Siegelman and Scrushy spent most of their prison time at different facilities, but while together they were a bit of an odd couple:

I started doing push-ups in the six feet by twelve cell that had a metal table, our bunks, a stainless steel toilet, and a sink that provided small spurts of cool water. We had two tiny bars of soap, a ragged washcloth, and a small towel. Two paper cups. Richard scrubbed penciled obscenities off the walls.

He prayed several times a day. I stopped whatever I was doing and joined him. We prayed for our families and friends. I prayed to make a phone call. Richard prayed that his medications would come soon.

Siegelman was behind bars for roughly six years, and he spent most of that time at Oakdale, Louisiana. where he was not the only former governor in the prison population:

In many ways, Oakdale was a breath of fresh air. Soon after I arrived, a prisoner in his seventies greeted me with, "Welcome to Oakdale, Governor. I'm Governor Edwards." Edwin Edwards laughed and added, "I was the governor of Louisiana for four terms, so people call me Governor. There's only room for one governor here, so you're G-2. That's because my name at Oakdale is G-1."

As for animals, most of them gave the place a certain charm, although that could not be said for the rodents:

One night we set a camp record. We snagged six mice using sticky paper. Not a pleasant site, but I was glad to be rid of them. Lenny, our resident cat, had a feast.

A particularly memorable animal at the prison was named Leroy:

One of my best friends at Oakdale staggered into camp in the summer of 2015, a half-starved mutt who weighed about forty pounds.

Many of us were drawn to him and his plight. Someone, probably one of the Southern white boys, said he looked like a Leroy and the name stuck. We fed and bathed the poor guy. He would stay for a while, wander off, then come back. One morning he looked as if he had been in a fight with a fierce raccoon. His face had been bitten from his left eye to his mouth. His ear was bleeding and I feared he would lose the sight in his left eye. He looked all but dead.

We nursed and loved him back to health. I put antibiotic cream on his wounds and started feeding him every day. Others pitched in. Soon I was saving the food I rarely ate for Leroy--potatoes, chicken, hamburgers, pasta, and hot dogs. At breakfast, guys would feed him donuts. After a couple of months, Leroy's ribs weren't showing. Once he had been fed decently and cleaned up, and had recovered from his wounds, he was a handsome fellow.

Leroy wound up finding a forever home with a Siegelman supporter who lives on a farm in south Alabama.

I walked around the track with fellow inmates Oscar and Kenny. We searched the heavens nightly. We found consistency and solace in the North Star, Polaris, and the Big Dipper and other constellations that hinted at the mystery and wonder of God's creation.

The subjects we discussed mattered less than our friendship. We were brought together by fate. We looked to the heavens and spoke of God and the universe. And sometimes about our own lives and uncertain futures.

I watched the leaves change. From the summer greens and leaves dried brown from scorching heat, to the oranges, yellows, reds, and browns of autumn. Then winter arrived, followed by welcome verdant greens of late February and early March. Same trees, larger branches, different leaves.

Political news made its way into Oakdale, especially when 60 Minutes and reporter Scott Pelley featured a segment on the Siegelman case. The prison's two TV rooms -- a small one for white guys and a larger one for black inmates, filled to near capacity. Siegelman himself took one of the last seats in the large room that black inmates had offered for the occasion:

Pelley's reporting was everything I could have asked for. When the program ended, I asked Governor Edwards: "What did you think, Governor?"

Edwards said,"Well, I had assumed you were guilty. Now I'm thinking you got screwed."