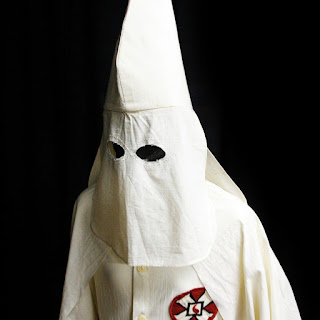 A black factory worker in Alabama filed a discrimination lawsuit when he was fired after complaining that someone had left a Ku Klux Klan hood in his locker. What law firm represented the company -- Chemical Lime Co., of Calera -- essentially defending the use of KKK materials to harass a black man on the job? That would be Balch Bingham, of Birmingham, with its historic ties to segregation and the George Wallace administration -- including a 1960s highway-funds scandal that involved a firm that employed the imperial wizard of the KKK.

In the Chemical Lime case, 25-year employee Albert Thomas received  a substantial jury award, even though he prevailed on only one of his eight legal claims. From a 2011 report on the case at al.com:

A jury in Birmingham fed­eral court has awarded more than $300,000 to a black Bir­mingham-area man who filed a discrimination suit after being fired amid his complaint about the dis­missal to the Equal Employ­ment Opportunity Commis­sion.

Albert Thomas won the $314,000 verdict on Wednesday after a trial in U.S. District Court, accord­ing to Jon Goldfarb, his law­yer with the Birmingham firm Wiggins Childs Quinn and Pantazis.

Thomas sued Chemical Lime Co. about a year ago, which was about a year after he was fired after 25 years on the job. Thomas worked at the company's plant in Calera.

Thomas prevailed on one of eight claims cited in his lawsuit, that he was retal­iated against after filing a complaint with the EEOC.

"He is a worthy client and it was a good verdict," Gold­farb said.

Al.com provides background on the case:

A lawyer for Chemical Lime said the company is considering an appeal and that the jury made no find­ing of race or age discrimi­nation, as alleged in the suit. That suit included racially charged allegations. It said someone had cut white sheets into the form of Ku Klux Klan garb, and left them in plain sight for Thomas. When he com­plained, the suit said, his su­pervisor taunted him with the paraphernalia.

Shortly after, the suit said Thomas was demoted from a control room operator's job that paid $20 an hour to a labor position that paid $15. Soon after, Thomas filed a complaint with the Equal Employment Oppor­tunity Commission.

"You won't be working here much longer, you will be with your brothers on the street," the suit quotes a Chemical Lime production supervisor as saying to Thomas, a comment pre­ceded by a threat to "fire his black" posterior.

Chemical Lime's lawyer said those events never happened, and that the company is considering an appeal of the verdict.

What kind of work is conducted at Chemical Lime?

Chemical Lime employs about 150 people in Calera, according to the 2010 Ala­bama Manufacturers Regis­ter. It makes quicklime, which is made by heating limestone and used to treat sewage waste.

Lhoist North America in turn is a unit or affiliate of Lhoist Group, which has lime, dolomite and other mineral operations world­wide, with a corporate headquarters in Belgium. It was started in Belgium in 1889, according to its web site.