Dysfunction in the Trump White House causes maldistribution of remdesivir, the antiviral developed at UAB and approved for COVID-19 treatment 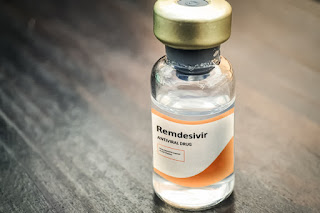 Just when it seemed the U.S. government's response to the coronavirus outbreak could not get any worse, along comes this story from Axios with the headline: "Scoop: Trump officials' dysfunction harms delivery of coronavirus drug."

So, what did the Trumpies screw up this time? It involves remdesivir, the antiviral drug developed at UAB that stands as the only FDA-approved treatment for COVID-19 patients. Here are details from reporter Jonathan Swan:

A complete breakdown in communication and coordination within the Trump administration has undermined the distribution of a promising treatment, according to senior officials with direct knowledge of the discussions.

Why it matters: The drug, remdesivir, hasn't made it to some of the high-priority hospitals where it's most needed, and administration officials have responded by shifting blame and avoiding responsibility, sources said.


The Trump administration is shifting blame and avoiding responsibility? I'll be darned, who could see that coming? We know that is the Trumpies' go-to move, but what exactly is going on in this instance? Swan writes:

Where it stands: Gilead Sciences, the company that makes remdesivir, donated hundreds of thousands of doses to the federal government after the Food and Drug Administration authorized it as an emergency treatment for coronavirus patients.

* More than 32,000 doses of remdesivir were shipped and delivered on Tuesday to Indiana, Massachusetts, New Jersey, New York, Rhode Island, Tennessee and Virginia.

* But many of these doses went to "less impacted counties," an administration official said.

"Some went to the wrong places, some went to the right places," said one senior official. "We don't know who gave the order. And no one is claiming responsibility."

Yes, but: That's only about 5% of the total doses that will be distributed.


Heck, this goof even made some Trump insiders want to wretch:

Behind the scenes: Senior Trump administration officials, including Vice President Mike Pence and Coronavirus Response Coordinator Deborah Birx, were angered about what has transpired here.

* At Wednesday's meeting of the White House Coronavirus Task Force, Pence personally directed Health and Human Services Secretary Alex Azar to take more ownership for getting remdesivir to the places where it's needed, according to a source familiar with the meeting.

* In subsequent conversations with colleagues, Azar said he had not known about the arrangements that led to mass confusion and misaligned shipments the day before.

* Azar distanced himself from the debacle despite the fact that one of his top officials, assistant secretary for preparedness and response Robert Kadlec, was intimately involved in the distribution plan.

Between the lines: HHS was supposed to work with FEMA to allocate and distribute remdesivir to coronavirus hotspots around the U.S., but as the problems became apparent to the wider team on Wednesday, neither agency took responsibility.

* But somewhere along the way, communication broke down. Thousands of doses were maldistributed, but as of Thursday, nobody was willing to put their name on this situation.


President Trump's stance of avoiding responsibility seems to have filtered down to his entire administration:

How it happened: The official said the criteria that determined where the drug was distributed was based off of outdated data, though it was nonetheless the best data the federal government had available.

* The official added that this failure of distribution highlights the need for better data. "But it more importantly highlights the reason why the administration continues to push a locally-executed response effort, because they [the local jurisdictions] know the data and the distribution better than the federal government."

* The administration will use more stringent criteria to target the remaining doses to the patients most in need, a source familiar with the planning said.

This dysfunction and blame-shifting inside the Trump administration was vividly highlighted in a CNN story Thursday about how doctors and pharmacists have been struggling to understand the administration's process for distributing the drug, as the two agencies placed the ultimate responsibility for the plan on each other.

As CNN and the Wall Street Journal have reported, health care leaders have been sounding the alarm over the Trump administration's lack of transparency in distributing remdesivir.


How deep is this problem? Pretty darned deep, it appears:

The backstory: This isn't the first time the Trump administration has descended into dysfunction over its handling of remdesivir.

* As Axios first reported, federal officials were slow to act on Gilead's request, in January, to send doses of the drug to China to begin clinical trials.

* The drug has shown promising initial results, at least at the margins, in some clinical trials. It appears to shorten some patients' hospital stays by about four days. Although the FDA hasn't yet fully approved the drug, it signed off last week on emergency use to treat coronavirus.

* Gilead then offered to donate more than 600,000 doses of remdesivir for the federal government to distributed to where it's most needed around the country.

What they're saying: "An initial allocation of the drug remdesivir was made to seven states on Tuesday, and — after consultation with health experts — HHS will be managing distribution of the next tranche of the treatment to 16 states tonight and tomorrow, based on urgent need," Devin O'Malley, a spokesman for the White House Coronavirus Task Force, told Axios.

Trump administration officials worked throughout the day on Thursday on the distribution plan for its next batch of remdesivir.