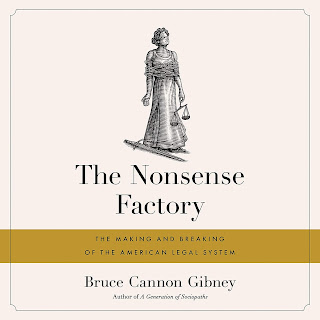 The American justice system is so broken that it churns out mass quantities of "nonsense," according to a new book that shows how and why courts poorly serve the public. One reason for such dysfunction, and massive waste of taxpayer resources, is that courts are controlled by amateur judges who don't know what they are doing in many cases, writes lawyer-entrepreneur Bruce Cannon Gibney in The Nonsense Factory: The Making and Breaking of the American Legal System (Hachette Books, 2019).

Gibney started as an attorney, working mostly in securities litigation and financial regulation. He became an author and venture capitalist, serving as an early investor in PayPal and joining with colleagues to help fund Spotify, Lyft, AirBnB, and DeepMind, among other tech firms. His assessment of the justice system is not pretty:

In the common view, law is a system of intelligible rules, made sensibly and applied evenly. That's a reasonable definition of what law should be, but not an accurate description of what law has become. Over the past century, whole fields of law have grown so bloated and confused that not even a subset of their rules can be administered consistently. To cope, law modifies or ignores its own rules on the fly, and the entire legal system is backsliding toward a regime in which the arbitrary supplants the absolute. Eventually, what calls itself law will cease to deserve the name.


A healthy court system, Gibney writes, should revolve around order, justice, and legitimacy, but those quaint notions are in ever shorter supply:

A minority of Americans already suffer these legal deficits severely. But general legal decay consigns all of us to injustices large and small.  Whether our antagonists are police, building inspectors, litigious opportunists, or Social Security benefits and administrators, our legal difficulties are real and they will get worse. These are the inevitable consequences of a system of rules self-liquidating into a chaos of exceptions.


Even some of the system's best-known attributes are on the verge of extinction:

Consider the right to trial by jury, provided by the Constitution and American law's crown jewel. It is The Rule. Yet American trial courts conduct very few trials -- a withering that became quite pronounced in the 1980s. In criminal matters, virtually all charges are now resolved by plea bargains, each fashioned according to the unaccountable whims of a prosecutor selecting from a vast menu of crimes. These bargains are . . . made ad hoc, and they leach the jury trial rule of its value. Nevertheless, the Supreme Court condones plea bargains as useful expediencies . . . .Notice that the Court does not make a Constitutional argument; it offers a bullet point on the management consultant's slide deck, sandwiched between "outsourcing" and "downsizing." The Court works a betrayal, and claims that it's for our own good.


The thought of having to pay for a lawyer out of pocket should terrify most Americans, Gibney writes:

Most actions, whether civil or criminal, are resolved out of court determined by the variables of money, law, and evidence, in descending order of importance. Quite simply, law is beyond the financial reach of most Americans. Even at $200 per hour, the least any decent city lawyer can afford to charge ($300 to $1,000 is the usual range), the poorest 20 percent of Americans could afford zero days of legal representation and the next 20 percent about a week. Only the richest 20 percent -- really, just the top 5 to 10 percent -- can afford to litigate comfortably. Pure financial necessity forces almost all cases to settle, and quickly.


If you are lucky enough to afford a lawyer and get into court, you might wind up before a judge whose qualifications are thin, at best:

Although judging is a specialty like neurosurgery and plasma physics, America assumes judging can be picked up on the fly. . . . Even lawyers with outstanding legal educations and rated "qualified" may nevertheless find themselves woefully unprepared for their first years on the bench, because there's no job that quite prepares any private lawyer to be a judge and no rigorous training program to compensate for that reality. As former federal appeals judge Richard Posner observed, the transition to the bench is abrupt, and while judicial education has improved since Posner joined the bench in 1981, it remains weak.


When it comes to judicial preparation, America lags way behind many of its European counterparts:

Much of the world would view the American system of judicial (non-) education as bizarre to the point of negligence. Non-Anglophone countries groom future judges as they would candidates for any other profession. In France, the conventional route to judgeship is to obtain bachelor's and master's degrees (customarily in legally inclined fields), pass a rigorous screening test, and undertake a further thirty-one months at the Ecole Nationale de la Magistrature.


Meanwhile, U.S. courts, at almost all levels, are drenched in politics:

Of all the interest groups, none has been as influential as the Federalist Society ("Fed Soc," in the community). Fed Soc's defining mission is to tilt the judiciary rightward, and it has been enormously influential; arguably, Fed Soc is the right's greatest political success since Nixon's Southern strategy. . . . Fed Soc has been so successful that, since the 1980s, right-leaning administrations have adopted the group's judicial lists wholesale. . . .

Once on the bench, politics continues to play a role (sometimes masquerading as "judicial philosophy"), and this is particularly noticeable among judges auditioning for promotion to higher courts. Auditioners to the Supreme Court, regardless of party, produce more "tough on crime" outcomes relative to other judges with comparable outlooks and profiles. . . . Even judges who can be promoted no further sometimes allow politics to influence their reasoning. Antonin Scalia's vaunted originalism/textualism famously warbled in and out of tune, depending on the case.


A big problem for the U.S. system: It has too many law schools -- Gibney calls them "The Diploma Mills of Last Resort" -- that spew forth way too many law graduates:


No analysis of the American justice system would be complete without a critical look at law enforcement. Gibney refers to many modern police forces as "miniature armies":

Militarized raids have become a regular part of American policing, with predictably tragic consequences. Special Weapons and Tactics teams were originally designed for extraordinary situations like hostage-taking, but they have become disturbingly ordinary. . . . The police have become omnipresent, miniature armies kitted out with bomb suits, battering rams, night-vision goggles, armored personnel carriers, helicopters, drones, assault rifles, flashbang grenades, .50 caliber machine guns and other military paraphernalia. Police receive much of their stockpile from the Defense Department's 1033, partially subsidized by the Department of Homeland Security.


Who is put in charge of this high-grade weaponry? The truth behind that question is unsettling, for sure:

After educational screening, departments test for aptitude and temperament. The aptitude tests don't seem particularly challenging. . . . The true hurdle is the background check, as many aspiring cops have criminal pasts. To satisfy hiring needs, 80 percent of larger police departments are willing to overlook minor misdemeanors; many departments will forgive DUIs, soft drug use, credit problems, and other indicators of poor judgment. The actual prevalence of waivers depends on the department, but it's odd that a society busily drug-testing Taco Bell employees overlooks criminality in its police.


What to do with America's tangled mess of a justice system? Gibney presents some intriguing ideas. Near the top of his list is a reduction in U.S. law schools:

The fifty least selective law schools are not schools at all and should be closed. The middling tier should consider alternative curricula, including something like a JD-lite. Many legal matters are routine and low-stakes and, just as medicine has authorized the nurse practitioner to handle many tasks, law can do the same --as happens in countries like France.


What about other possibilities for reform?

Public law should make itself more accessible and more accountable to those it serves. Law is obligated to explain itself to the people, not vice versa. Statutes should be written clearly, court opinions at the appellate level digested by public services, and agency regulations written and posted in formats accessible to those affected. . . . . When law seeks to hold people to account, citizens should be given a reasonable sense of what the law is, what purpose it serves, and why it's being enforced. . . . Law has an internal morality, and it's time for judges to take that morality seriously and earn the title of "Your Honor."

Informal citizens' review boards across all levels of the law could help, a sort of advisory jury of legal peers that reads proposed laws and opines on their comprehensibility. (Note: I would prefer that such boards focus on the actions of judges, to make sure their rulings are sound within the facts and law, with the authority to punish judges who essentially act like berobed rogues.) . . . And finally, the culture of expedience, of sidestepping good rules . . . must go. In any other context, it would be dismissible tautology to insist that "rules are rules," but law's endless exceptions  make it clear that rules aren't rules; they have become mere stage-effects.

It's difficult for the public to take laws seriously when law doesn't take the public seriously. And when law fails to afford citizens respect, or treats them as cattle to be herded one way or another without consultation, justice becomes a mirage.


Gibney is a talented wordsmith, and this makes him an engaging tour guide through our thorny thicket of a justice system -- a task that might produce glazed eyes in the hands of a less gifted writer. Gibney should be admired for his willingness to take on challenging, even touchy, subjects. The Nonsense Factory is his second book; the first is titled A Generation of Sociopaths: How the Baby Boomers Betrayed America (Hatchette Books, 2017)

As a Baby Boomer, who hates being part of the Baby Boom, I can't wait to get my hands on that one.
Posted by legalschnauzer at 6:15:00 AM