Popeye's Pandemonium! The chicken sandwich from heaven leads to hellish scenes of violence, including a parking-lot stabbing death for cutting in line at a Maryland restaurant -- with lawsuits likely to follow 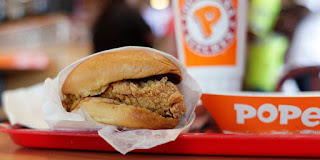 Authorities in Oxon Hill, MD, are searching for a suspect in the fatal stabbing of a man, who reportedly cut in on a line of customers waiting to order the wildly popular chicken sandwich at a Popeyes restaurant and wound up dead in the parking lot a few seconds later.

The "Death by Chicken Sandwich" story is one of those nutty postmodern news items that leave you not sure if you should laugh or cry. We predict the story will get even nuttier when creative lawyers start filing lawsuits for torts like premises liability, wrongful death, negligence,"failure to protect against hungry hordes," and "failure to provide security for customers seeking fast-food delicacy."

Some early reports had not-quite-accurate headlines like "Man stabbed to death after argument over Popeyes' chicken sandwich." The argument actually was over cutting in line -- but, of course, there would have been no line if the sandwich wasn't so damned good -- it has received rave reviews in Southern Living and The New Yorker, with the latter proclaiming it would "save America."

(Full disclosure: I've had the spicy version of the Popeyes sandwich on three occasions, and my verdict is that it is, in fact, a fine and tasty concoction. Is it worth all the fuss? Well, I wouldn't kill anybody over it . . . I don't think.)

This is only one of several reports about violence at Popeyes locations since the company started serving such a damned good sandwich back in the summer. TMZ has video of a drive-thru beat down and a scuffle among workers. Business Insider reports that restaurant employees have received threats from customers after running out of the sandwiches, and one customer even pulled a gun in such a situation. In another incident, armed robbers stormed a Popeyes in Houston and demanded employees make them chicken sandwiches.

What happened on Monday night at the Maryland establishment? Here's how The Washington Post describes it:

About three dozen people packed into the busy Popeyes in Oxon Hill, Md., on Monday night, with many of them waiting to order one of the fast-food restaurant’s popular chicken sandwiches.

One man entered the store before 7 p.m., and over 15 minutes “methodically” cut ahead of people in line until reaching the front counter, Prince George’s County Police Chief Hank Stawinski said Tuesday. But before he could buy the meal he intended to get, an argument broke out between him and a man who confronted him about skipping the line, Stawinski said.

Within 15 seconds after words were exchanged, police said, a fight spilled out into the parking lot of the restaurant, leaving the man who had been line-jumping fatally stabbed.

The killing of the man, who police identified Tuesday as Kevin Tyrell Davis, 28, of Oxon Hill, left authorities stunned over the “pointless” violence as they continued to search for the assailant.


Friends and family members describe Davis as . . . well, just an impossibly swell guy. From The Post:

Outside of Davis’s home Tuesday evening, family members gathered in mourning. They declined to give their names or speak to the specifics of what occurred Monday night but said they did not think the altercation was over a sandwich.

“He was awesome,” a cousin said. “It surely wasn’t over no chicken sandwich. It was senseless.”

“He was a great young guy trying to get his life together like all young people,” said a woman who identified herself as an aunt. “He was a great kid.”


My thoughts? If Davis was so "great" and "awesome," why did he think it was a good idea to cut in line ... anywhere, much less at Popeyes, where they serve damned fine sandwiches? Having been the victim of line-cutters a time or two in life, I consider them to be among the most thoughtless and boorish cretins on the planet. If Davis had anything besides chickpeas between his ears, he should have known that in any public situation --  in the era of Trump, the NRA, and "Moscow Mitch" -- several somebodies are likely to be armed with military-grade weaponry. That almost makes cutting in line an act of suicide.

Would I kill somebody for cutting in line? Well, I haven't yet. In the future, it probably will depend on how good a sandwich I'm waiting for.

Maryland authorities have released a clear photo of the alleged assailant, so the criminal side of the Popeyes story should be resolved fairly quickly. As for the civil side, I can envision attorneys batting out complaints that allege Popeyes should have seen this coming and provided security for customers daring to order a chicken sandwich. I also can foresee lawyers breaking out that old legal chestnut, premises liability, which essentially holds that a property owner can be held accountable for injuries sustained on his property -- even if he had nothing to do with hurting anyone.

My wife, Carol, and I know firsthand about the challenges of premises liability. It's the No. 1 reason we resisted when our criminally inclined neighbor (and Blue Cross/Blue Shield of Alabama employee) Mike McGarity -- and a revolving cast of dozens of kids, most unknown to us -- sought to turn our yard into their playground. It didn't help that McGarity had placed his fence on our yard, essentially stealing roughly 400 square feet of our property, and he showed no sign initially of giving it back -- and he never has paid us for the expenses we incurred because of his "mistake." Here's what I wrote in a previous post on the subject:

Why did such issues confront us? We had the misfortune of having a man named Mike McGarity move in next door to us in late 1998. McGarity has the trappings of a standard-issue suburban dad -- a wife, two kids, a job at Blue Cross and Blue Shield of Alabama. But his belligerent and threatening tone, which we encountered regularly, hinted that something dark was going on. We eventually learned that McGarity, in fact, has at least eight criminal convictions in his background.

And yet, this menacing fellow decided he, his kids, his kids' friends, other adults, and a veritable cast of thousands (other neighborhood kids, many of whom we didn't know, didn't know their parents) should be able to turn our yard into a playground -- without bothering to ask for our permission. When I instructed McGarity to keep himself and his minions off our property, I was greeted with "I'm going to sue you for harassment" and "We're going to keep on coming."

Why was that a concern, aside from the fact McGarity had proven he's an ass, the kind of person we didn't want to deal with? (When asked to control the ear-splitting barking of his coonhound dog, McGarity's reply: "You just need to get ear plugs."). Well, it involved . . . legal issues . . .

One such issue is called "premises liability." Here is how findlaw.com defines it:

When someone enters your property, they have a reasonable expectation of not getting injured. This means that you, as a property owner (or non-owner resident), are responsible for maintaining a relatively safe environment. This is known as "premises liability." For example, a courier delivering a package may sue you for injuries if he slips and falls on an oil slick in the driveway.


Is this a legitimate legal concern? One could argue that it shouldn't be because it seems patently unfair, but yes, it is real. And it sure as hell was a concern to us:

What if McGarity, or another adult or child from his yard, had slipped and fallen on our property? The injured party likely would have sued us, even if we had maintained a safe environment. (Note: McGarity had already hinted that he was a litigious sort, threatening to sue us for harassment because we tried to exercise our right to keep him off our yard. This just added to the mountain of reasons we did not want him, or anyone affiliated with him, coming on our yard.)

What if a child had fallen on our concrete driveway and sustained serious head trauma? Our insurance rates likely would have skyrocketed, and we might have been dropped as an insured altogether.

Premises liability cases, under Alabama law, involve numerous variables, so its hard to predict the outcome of a particular case. But even if the homeowner prevails in court, the defense of such a lawsuit is likely to be expensive and might still count as a mark against you with an insurance company. The best idea is to try to prevent injuries on your property, and that's exactly what we tried to do.


A Popeyes spokesperson already seems to be thinking of lawsuits, as seen from this reporting at TMZ, which indicates the company has no plans to remove the famed chicken sandwich from its menu -- at least until a few more homicides occur on its premises:

Popeyes' wildly popular chicken sandwich will remain on menus nationwide, despite the chaos it's causing at several locations ... including a fatal stabbing.

A rep for the fried chicken fast-food chain tells TMZ the sandwich is still available ... meaning it's not being pulled in the wake of scattered mayhem erupting across the country since its return to the menu this week. . . .

The chicken chain says the safety of its employees and customers is always a priority, and franchisees have worked to boost staffing during this craze to be ready to serve guests quickly and safely.

It adds that most Popeyes restaurants are franchised and "additional onsite security matters are handled by the franchisees."


Ah, so franchisees are the responsible parties? I'm sure they will be delighted the company shared this information with . . . oh, everybody on the Web. As for Popeyes itself, that defense is known -- in the trade -- as "Dear God, please sue the other guy!"

We will strive to keep track of how well that works. If I were working for Popeyes' insurance company, I would prepare to start writing out checks.

That reminds me . . . all of this journalism stuff is making me hungry. Think I need a spicy chicken sandwich -- and nobody had better get in my way.

Check out this video of people fighting at Popeyes: