Jeffrey Epstein's death most likely was due to homicidal strangulation rather than suicide by hanging, according to independent patholgoist, who says official findings were riddled with irregularities 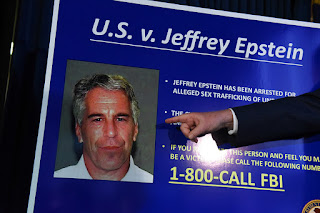 Jeffrey Epstein's fatal injuries looked more like homicidal strangulation than the official finding of suicidal hanging, according to an independent pathologist that Epstein's brother hired. In an interview with the Miami Herald, Dr. Michael Baden pointed to a number of irregularities in the official investigation.

Perhaps most striking, according to Baden, the pathologist who actually conducted the autopsy struggled to reach a conclusion and initially ruled the manner of death as "pending" -- only to have the chief medical examiner change it to "suicide."

From the Herald article by Julie K. Brown, who generally has led the way in reporting on the Epstein case:


Since his brother Jeffrey Epstein was found dead in a New York federal jail in August, Mark Epstein has been worried that his own life, and the lives of other people, may be in danger because federal authorities, believing it a suicide, have not fully investigated the circumstances of the sex trafficker’s death.

Now a private forensic pathologist hired by Mark Epstein to monitor his brother’s autopsy has offered an opinion that bolsters what conspiracy theorists have suggested for months: that the available evidence does not support the finding that Jeffrey Epstein killed himself.

Dr. Michael Baden, one of the world’s leading forensic pathologists, viewed Jeffrey Epstein’s body and was present at the autopsy — held Aug. 11, the day after Epstein was found dead at the notorious Metropolitan Correctional Center in downtown Manhattan.

In an interview with the Miami Herald, Baden described Epstein’s jail cell, the ligature he allegedly used to hang himself, and his own suspicions that federal authorities have not conducted a thorough probe into Epstein’s cause and manner of death.


Perhaps the No. 1 sign that Epstein was murdered involve the number of fractures found in his neck. Writes Brown:

“They rushed the body out of the jail, which they shouldn’t do because that destroys the evidence,’’ Baden told the Herald.

“The brother, Mark, doesn’t think it was suicide — he is concerned it might be murder. It’s 80 days now and if, in fact, it is a homicide, other people might be in jeopardy,’’ Baden said.

Baden’s observations . . . include that Epstein suffered multiple fractures in his neck — injuries he said are more consistent with strangulation than suicide by hanging. Epstein, who was found dead Aug. 10, had three fractures on the left and right sides of his larynx, Baden said.

He told the Herald that it is rare for any bones to be broken in a hanging, let alone for multiple bones to be fractured.

“Those fractures are extremely unusual in suicidal hangings and could occur much more commonly in homicidal strangulation,” said Baden, who added that there were hemorrhages in Epstein’s eyes that are also more common in strangulation than in hangings.

His findings will likely fuel online conspiracy theories that have suggested, with no evidence, that Epstein was killed to keep him from incriminating other wealthy and powerful men involved in his sex trafficking crimes.

On the day before his body was discovered, more than 2,000 pages of court documents were unsealed, revealing that one of Epstein’s young victims, Virginia Roberts Giuffre, had provided sworn testimony in a 2016 court case that Epstein directed her to have sex with a number of men who were prominent figures in politics, finance, science, academics and philanthropy.

Those men have all denied her allegations. But the timing of Epstein’s death, coming just weeks after federal authorities claimed he had previously tried to kill himself at the jail, raised further questions as to why Epstein — one of the most high-profile inmates imaginable — wasn’t being monitored more closely.


New York City Chief Medical Examiner Barbara Sampson, who made the official finding of suicide, fired back at Baden's conclusions:

Baden’s opinion contradicted New York City Chief Medical Examiner Barbara Sampson, who ruled Epstein’s cause of death to be a suicide by hanging.

Sampson, in a statement . . . , said she is confident in her conclusion that Epstein hanged himself.


Baden does not share Sampson's certainty. From the Herald report:

Baden told the Herald that the pathologist who actually conducted the autopsy, Dr. Kristin Roman, also had trouble determining that Epstein hanged himself, and initially determined that the manner of death was “pending.’’

“The autopsy did not support suicide,’’ Baden said. “That’s what she put down. Then Dr. Sampson changed it a week later, manner of death to suicide. The brother has been trying to find out why that changed. … What was the evidence?”

Sampson has not released the full autopsy report.


It's possible Sampson has access to evidence she has not shared with Baden, but years of experience have taught Baden that prison death scenes can easily be manipulated:

Baden acknowledged that there could be additional evidence that led to Sampson’s conclusion that she has not shared with him or Epstein’s brother.

Baden, 85, who once led the New York City Medical Examiner’s office, has participated in some of the country’s most infamous death investigations, including the congressional inquiry into the assassination of President John F. Kennedy.

For nearly five decades, Baden has also been a member of a New York state commission that reviews deaths in the state’s prisons, and knows how crime scenes within the isolation of prisons can be tainted and even staged.

“There’s always concern that if the only reporting you are getting is from those involved in the care of that inmate that it may be biased,’’ Baden said.


What about other possible irregularities in the Epstein investigation? Writes Brown:

In this case, Baden said he saw a photograph of Epstein’s cell after his body was removed. It showed a ligature fashioned from an orange bed sheet on the floor of the cell. Baden said he was told — but shown no written report — that a corrections officer found Epstein’s body, on his knees, with the orange ligature around his neck, tied to the top bunk in his cell.

He pointed out that authorities have only the word of the people in the jail as to what happened, and his impression is that the officers were not forthcoming.

“He was stone-cold dead when they found him,’’ Baden said. “He had been dead for three hours. Rigor mortis set in, and it was apparent he was dead, yet they called EMS and didn’t photograph how the body was found.’’

Baden said Sampson’s conclusion sends a message that there is no need to look further into how Epstein died.

Mark Epstein, Epstein’s only sibling and his next of kin, has been frustrated that he has not been able to obtain the EMS report or the hospital report, Baden said.

Baden said that these are all questions that should be answered before concluding that Epstein committed suicide. And he said questions about the federal facility’s apparent security lapses should also be a factor to explore.

Following the autopsy, it was revealed that the two prison officers who were assigned to monitor Epstein at 30-minute intervals fell asleep and that at least some of the security cameras in the wing were not operating.

Baden, who has conducted more than 20,000 autopsies, said that in 50 years he has never had a prison death where two corrections officers fell asleep, nor has he ever had a case where three bones were broken in an alleged suicide by hanging.

He said that in hangings most deaths occur as a result of compression or obstruction of the carotid arteries in the neck, which would restrict blood flow to the brain, causing death. The fact that Epstein suffered fractures suggests that force was used, he said.