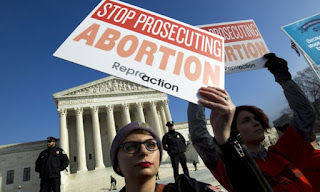 Alabama is one of about a dozen states that are in various stages of trying to pass "fetal heartbeat" laws that generally would outlaw most abortions after six weeks of pregnancy -- before many women even know they are pregnant. The legislative efforts, which tend to be centered in the South and Midwest, "represent the largest assault on abortion rights in decades," according to a recent Associated Press report.

A group of high-profile gynecologists -- people who know a thing or two about the human biology related to pregnancy -- say "fetal heartbeat" bills tend to be based on medical ignorance and fraudulent use of the English language.The gist of their argument: At six weeks, there generally is no fetus and there is no heart; that makes it pretty difficult to claim there is a "fetal heartbeat." From a recent report at The UK Guardian:

“These bills present the idea that there’s something that looks like what you or a person on the street would call a baby – a thing that’s almost ready to go for a walk,” said Dr Jen Gunter, a gynecologist in Canada and the US who runs an influential blog. “In reality, you’re talking about something that’s millimeters in size and doesn’t look anything like that.”

That early in a pregnancy, Gunter said, an embryo does not have a heart – at least, not what we understand a human heart to be, with pumping tubes and ventricles. At six weeks, a human embryo throbs, but those tissues have not yet formed an organ, so the pulsing should not be confused with a heartbeat.


Notice Gunter's use of the term "embryo." That's because that's what it is at six weeks, not a fetus. Also notice that she says a "human embryo throbs" at six weeks. But those throbs are not heartbeats because there is no such organ:

It would be more accurate to call these bills “fetal pole cardiac activity” measures, said Gunter. Though it doesn’t roll off the tongue, the term would capture the state of an embryo at six weeks, which appears more fish-like than human baby.

“When throbbing of some tissue begins, it’s not a heart,” said Dr Sara Imershein, a gynecologist and obstetrician in Falls Church, Virginia. “Really, we call it an embryo until about nine weeks from last menstrual period,” or roughly three weeks after the new laws prohibit termination of pregnancy. . . .

"It’s a process – the heart doesn’t just pop up one day,” said Imershein. “It’s not a little child that just appears and just grows larger”, in contrast to imagery often invoked by anti-abortion campaigns of embryos as tiny, miniaturized infants.


The Alabama Senate is expected to vote today on a bill that wold ban virtually all abortions in the state, pending the signature of Gov. Kay Ivey -- and likely court challenges. The vote is expected to come down to 31 men and three women in the Senate.

The "pro life" movement, it seems, is built on a mountain of contrived language, apparently designed to deceive and base the public discussion on religion, hysteria, emotion, and threats -- anything other than facts and medicine:

Misleading names like “heartbeat”move the debate away from medical considerations for a woman’s decision to get an abortion, said Gunter.

But anti-abortion activists twisted the phrase into a political construct understood to be any abortion after the 21st week, late in the second trimester. “Nobody is doing late-term abortions – it doesn’t happen,” said Gunter of the medical definition. “But it’s become a part of our lexicon now.”


In Alabama, Republican sponsors of a "fetal heartbeat" bill admit it is designed to overturn the U.S. Supreme Court's 1973 ruling in Roe v. Wade. That, of course, is serious business, so you might think drafters of the bill would at least base it on scientific facts and correct medical language. But you would be wrong; in essence, it's a political stunt:

Gunter said six weeks is not enough time to make informed medical choices. It’s before most women know they’re pregnant, and before fetal malformations can be diagnosed. The risks of medical conditions, such as lupus, won’t be apparent that early. There are some heart conditions “where we say, you should not be pregnant”, said Gunter. “The risk of death is 50%. We know that the second the pregnancy test is positive. But what if that person doesn’t seek medical care until they’re eight weeks?”

“The whole point [of these bills] is to introduce terminology that makes people think differently about pregnancy,” said Gunter.

In practice, she said, six-week measures are effectively abortion bans – a fact that misleading names such as “heartbeat bill” could obscure. “We can’t use the incorrect language in the bills,” said Gunter. “Because once you start using incorrect language, you’ve basically conceded.”