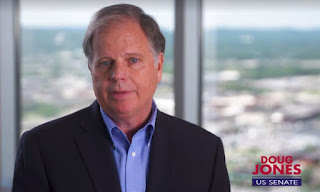 If U.S. Sen. Doug Jones (D-AL) ever had any coattails, their expiration date already must have passed.

Jones pushed for Montgomery attorney and lobbyist Peck Fox as chairman of the Alabama Democratic Party, but the executive committee on Saturday stuck with incumbent Nancy Worley. Is that a signal party leaders do not trust Jones? Do they see his upset win over Roy Moore in a 2017 special election for Jeff Sessions' old seat as a fluke, driven largely by a Republican-inspired dirty-tricks campaign? Are they uncomfortable with Jones' longstanding ties to some of the GOP's creepiest scoundrels -- including Rob Riley, Bill Canary, Karl Rove, Bill Pryor, and Jeff Sessions himself? Are they troubled that Jones is likely to vote for Trump U.S. Supreme Court nominee Brett Kavanaugh, while working behind the scenes to defeat Democratic attorney general candidate Joseph Siegelman?

The answer to all of those questions might be yes, according to retired Alabama attorney (and prominent whistle blower/opposition researcher) Jill Simpson. Insiders on both sides of the aisle are aware that Jones is a back stabber, with zero sense of loyalty -- given that he left multiple knives between the shoulder blades of former Democratic governor Don Siegelman. Simpson says. From her Facebook post over the weekend:

I am not a fan of Nancy Worley because I don't think she speaks out enough on wrongdoing of Republicans in our state, but I am way more not a fan of Jones, as progressive folks know he won his seat promising all kinds of bad deals to the Republicans. . . . We need a good young progressive Democrat to run the state party, and neither choice really looked good here, as I don't think it a wise idea to hand the party over to Doug Jones, who plays both sides and is too close to the corrupt Alabama Gang. It appears the Democrats have let it be known their dissatisfaction with him after this vote. I feel for the folks who had to pick which way to go, as neither was a great choice. I might add I think it would be a real mistake to let Doug and his DINO [Democrat In Name Only] bunch take over as Nancy Worley is way more progressive than Doug.


Worley had the support of Joe Reed, vice chair for minority affairs, and that was enough to overcome Jones' candidate, Peck Fox. The intrigue might just be starting, says Simpson:

The good news is it appears the Joe Reed/ Nancy Worley bunch see the true colors of Doug Jones, as he is behind the plan to overthrow their leadership -- and he did it in a very sneaky way, just like he screwed the Siegelman bunch. The Alabama Resistance has been entertained, hearing all about Jones' overthrow attempt from folks who watched Doug and Rob Riley try to take over the Democrats. We had wondered at the Resistance how long it was going to take for DNC folks to figure that out. I suspect next we will see the Jones bunch attempt to bring criminal charges against Worley,  as he wants control of the party, and we know he plays pretty dirty. Also, I suspect Nancy's bunch might try to get rid of him next election, as they see he is way too close to the Republicans.


Simpson says Jones' behind-the-scenes "yapping" to then Alabama attorney general Bill Pryor helped launch the Don Siegelman political prosecution and did inestimable harm to the state's Democratic Party. Could Saturday's failed takeover attempt prompt Jones to become a Republican? Simpson says that would not surprise her:

Doug's yapping to Pryor and taking Siegelman out killed the Democratic party in Alabama for nearly 16 years, so in no way do I believe he should be in charge of that party. As a reward for all Doug did to Don Siegelman, the Republicans supported Doug running as a conservative DINO for Senate, but I suspect before long, one of the sides is going to have serious buyer's remorse.

My hope is that Doug feels enough Democratic pressure that he does not vote for Trump's far-right SCOTUS candidate, Brett Kavanaugh. But I suspect he may very well try to use Saturday's event as a reason to switch parties and vote for Kavanaugh. If he does not, I doubt he gets re-elected. But Republicans tell me they know the tricks he and Rob Riley pulled on Don Siegelman and don't want him in their party, as they could never 100 percent trust him; they know how disloyal he is.

This is really entertaining to all of us on the left, who see Doug Jones clearly as a man motivated by his greed and desire to be powerful, at the expense of folks like Don Siegelman. We think Jones might finally have been caught in his deceit.