Missouri deputy who shattered my wife's arm violated policy on use of force, and his department has not conducted investigation according to its own policies 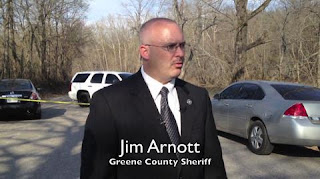 The Missouri sheriff's deputy who broke my wife's arm during an unlawful eviction last September violated departmental policy on use of force. Also, the Greene County Sheriff's Office has failed to follow its own procedures for investigating such incidents.

Is that a sign an attempted cover-up is under way? As a witness, who is married to the victim, that's how it looks from here.

How do we know the officer involved, whose name remains unknown to us (although we now can make a pretty educated guess at his identity), violated policy? The Greene County Sheriff's Office Policies and Procedures Manual is online -- and it makes clear how such incidents should be handled. Let's just say quite a gap exists between words in the manual and the reality of how my wife, Carol, was treated -- both before and after her arm was snapped in two, just above the elbow.

The manual spells out how such "critical incidents" are to be investigated. We know for sure certain elements of those procedures have not been followed -- and God only knows if any of the investigative procedures called for have been taken.

As for the brutality used against Carol, can any justification for it be found in Greene County policy? Absolutely not. Consider these words from page 60 of the manual, under "Subject Resistance and Control":

It is the policy of the Sheriff’s Office to provide its employees with proper training and guidance on the permissible use of force. This policy will ensure that the level of force used was reasonable, and required to subdue an individual offender or restore order to a disruptive group


That makes it clear an officer can use only a reasonable level of force required to "subdue an individual offender" or restore order to a "disruptive group."

Carol's "group" consisted of me (I was sitting in the driver's seat of our car) and our late kitty kat, Baxter (who was in a pet carrier on the hood of the car, where an officer had placed him, much to my chagrin). Neither Baxter nor I made a peep as Carol walked to the front door of our apartment in an effort to retrieve his litter box. Translation: She was not part of a "disruptive group."

As Carol approached the front steps, three officers surrounded her, and one slammed her, rear-end first, to the ground. She was thrown with such force, and came to such a sudden stop, that I believe she probably suffered a concussion. An officer then yanked on both of her arms -- in an upward and backward motion -- badly bruising both arms and breaking the left one so badly that it required trauma surgery and the implantation of numerous screws and titanium plates.

Carol had to undergo physical therapy several times a week for approximately four months -- with the best likely outcome that she will have 75-percent usage of her arm restored. (By the way, Missouri Medicaid covered Carol's surgery, but it does not cover the therapy, so that was on us, and we can't afford to pay it. Now, we are getting regular debt-collector calls, asking about the $7,500 apparently owed. Maybe we should refer them to the Greene County Sheriff's Department. It's nice to know that politicians in Missouri are just as stupid as the ones who have driven Alabama into the ditch. To have trauma surgery, without physical therapy, pretty much ensures the surgery will be a failure, and the patient likely will become permanently disabled for the rest of his or her life. To cover surgery, but not therapy . . . well, it's hard to imagine a more ignorant approach than that.)

What offense did Carol commit that required such a violent response? Let's see . . . she didn't resist arrest because no one said she was under arrest -- and she did nothing for which she could be arrested. (Does Missouri have a statute that prohibits the "unlawful retrieval of a kitty kat's litter box"? I haven't found such a statute.) Carol did engage in some verbal sparring with one of the officers, and I heard her say, "I'm only trying to . . ." -- and then I couldn't make out the rest, but I think that sentence ended with "get our cat's litter box." Did she threaten or curse anyone? She says she didn't, and I didn't hear anything like that.

Carol did not initiate physical contact with anyone, even though Greene County Sheriff Jim Arnott, who was standing about five feet away, immediately pointed at her and said, "She assaulted a police officer." She was handcuffed -- with her broken arm yanked behind her back -- and placed in the back of a squad car. The transporting deputy said she likely was looking at a $100,000 bond, which meant a felony charge.

Only when a woman at the jail paid attention to Carol's cries of help for her arm did it start to become clear that something was wrong. She was sent for X-rays to a nearby hospital, which revealed the severe break. Suddenly, it seems, sheriff's officials realized Carol was the victim of an assault, not the perpetrator of one -- and she still has not been charged with anything. Translation: Force, of a reasonable nature, can be used only to subdue an "individual offender." But the actions of Greene County officials show Carol committed no offense, so any amount of force used against her was unreasonable -- according to the sheriff department's own words.

As for investigation of the incident, consider these words from page 116 of the manual, which states that a criminal investigator will be appointed and . . .


Carol was the victim, and I was a witness, and no one from the sheriff's department has interviewed us in almost 12 months' time. That means this step is incomplete, or has been skipped altogether.

What else is supposed to be done in the wake of a "critical incident," and has any of it been done in the brutality case against Carol?

We will look at that in an upcoming post.

Here's a shocker. They probably aren't investigating because they are too busy covering up.

I guess they can write us a ticket for going 50 in a 45 zone, but they can't follow their own procedures when they have screwed up.

Do they have time to eat a lot of donuts?

Didn't these goobers claim you had called 911 and threatened to shoot anyone who tried to evict you, or something to that effect?

Yes, @12:23, that's exactly what they claimed. The deputy who drove Carol to jail, without failing to notice that her left arm was almost snapped in two, said he had heard the 911 call and they had traced it to our phone and our apartment. That's interesting, of course, because I've never made a 911 call in my life, in Alabama or Missouri. That means there is no way it could have been traced to our phone or our apartment. The whole thing either is a lie or someone helped them concoct an elaborate con game by somehow making it look like I had placed such a call when I hadn't.

Here's my bet -- I bet these cop dudes are sticking their heads in the sand, hoping you and Mrs. Schnauzer disappear into thin air. Option No. 2 is to be throwing evidence in the dumpster as quickly as possible.

Did you get swatted?

911 calls should be recorded. Either there was a call or there wasn't.

Maybe it was a swatting. There definitely was no call from me.

Regarding your wife's broken arm, I would be sure to keep your current address and phone number on file with the investigating authorities. Then, assuming they conduct an internal investigation, at lease they can't use the excuse they can't find her,

Find a lawyer, get the 911 call and publish it. Document Carols conversation, without omitting anything she said. What is her report of her "sparring" with officer's? Did she ask permission to reenter? Were they refusing? What was the "sparring"?

Did you call the managers (business office of the apartment complex) and make any forceful remarks about being evicted? They might have called police afterward, if they felt you were going to cause trouble based on your call.

Did you have a land line, or cell phone?

You need to get the incident report. Carol was hurt so there will be one.

Sorry, I don't take advice from anonymous folks. Tell us who you are if you want to be taken seriously.

What makes you think the sheriff's department is going to hand over a copy of the 911 call or an incident report? The post says they haven't conducted the investigation their own rules say they must.

As for the "call," the cops claimed LS called 911. They never said the landlord's office had anything to do with it. I suspect Mr. and Mrs. LS will get the information they need in the course of litigation, but I don't see the cops just handing over information without being forced to.

I wish I was admitted to the Missouri bar. I would love to represent the Schnauzers in this one.