Former Alabama governor Bob Riley has family connections to the Ku Klux Klan (KKK), the Council of Conservative Citizens (CCC), and other extremist groups, sources tell Legal Schnauzer. While governor, Riley backed down from a plan to merge two holidays when angry neo-Confederate groups threatened to go public with his family history.

Riley's father, Eustace Riley Jr. (grandfather of Birmingham attorneys Rob Riley and Minda Riley Campbell), was a KKK Grand Dragon in the small Clay County community of Ashland, according to our sources. The Rileys also have long-standing ties to the CCC, Sons of Confederate Veterans, and United Daughters of the Confederacy.

The CCC's Web site reportedly inspired Dylan Roof, who is charged with nine counts of murder from a mass shooting in June at the historically black Emanuel A.M.E. Church in Charleston, S.C. Roof apparently was heavily influenced by such symbols as the Confederate battle flag, and the Charleston shootings have sparked racial and cultural tensions. At least five people were arrested when white-supremacist and African-American groups clashed on July 18 outside the South Carolina State House, where the Confederate battle flag recently was removed. Members of the KKK played a prominent role in the skirmish.

Riley now heads a lobbying firm called Bob Riley and Associates, with offices in Birmingham and Montgomery. He has started a Scholarship Granting Organization (SGO), which provides money for students to attend private schools. Riley's SGO is one of a dozen created under the Alabama Accountability Act, a controversial school-choice law passed by the Legislature in 2013.

Why would Riley favor the use of tax credits from public-school revenues to help send kids to private schools? One answer might be money. The law allows an SGO to keep 5 percent of the maximum $25 million in tax-credited donations. Critics say more than $1 million could wind up in Riley's pocket each year.

Riley also might favor private schools because of his family's ties to white-supremacist groups. This was an issue several times while Riley was governor. It was widely reported in fall 2006 that Riley was a member of the Grand Lodge of Free and Accepted Masons of Alabama, a secret society governed by documents that forbid membership to "negroes or other inferior races." Birmingham radio hosts Russ and Dee Fine were fired after reporting on Riley's ties to a racist group.

In one report, Riley claimed he had not attended a lodge meeting since he was in his 20s, and he did not know the head of the masons in Alabama. That doesn't make much sense in light of a widely circulated photo of Riley with Grand Master Frank W. Little, 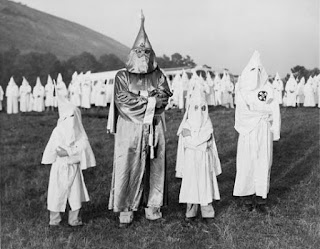 In 2004, the executive director of the Alabama Historical Commission resigned because of differences with his board of directors and Gov. Riley over his support for civil-rights preservation projects. Here is how the Southern Poverty Law Center (SPLC)  described the resignation of Lee Warner in a winter 2004 report:

This August, the executive director of the Alabama Historical Commission, which owns and oversees major historic sites in the state, was forced to resign his position after what were described as conflicts with commissioners and Gov. Bob Riley over the director's support for civil rights preservation projects.

The episode was only the latest of the last several years in which museum professionals and preservation officials from around the South have come under sometimes severe pressure from neo-Confederate activists and their sympathizers, occasionally including harassment and various kinds of threats.

In case after case, members of groups like the League of the South and the Sons of Confederate Veterans have agitated against these professionals in a bid to push versions of history that mainstream curators and historians agree are bunk. . . .

And in Alabama, Lee Warner, the former Alabama Historical Commission executive director, told a reporter that many of Riley's appointees to the commission had opposed his plans to create a museum at the old Greyhound bus station, where Freedom Riders were badly beaten in 1961, and to memorialize the 1965 Selma-to-Montgomery civil rights march.


Also in 2004, Riley supported a Business Council of Alabama plan to merge Confederate Memorial Day with Jefferson Davis' Birthday. The plan met strong resistance from Confederate heritage groups, who said the plan would eliminate "the one holiday especially set aside to honor Alabama's Confederate Veterans."

Word of opposition to Riley's plan hit the press on February 23, 2004. Four days later, Riley announced he was dropping the plan.

Why the swift turnaround? Our sources say the Confederate groups knew about Riley's ties to hate groups, especially his father's status as a Grand Dragon in the KKK, and they threatened to go public with the information if he did not cave to their demands.

The Riley family's ties to the Ku Klux Klan have remained out of the public spotlight--until now.

Interesting story, LS, but I don't think it's a surprise to anyone who has followed Bob Riley's rise to political power.

Good to see Bob getting nailed again for his racist heritage. He got nailed already for being a member of a Masons group that prohibits membership for those of "inferior" races. Class act, those Rileys.

The Rileys are glorified white trash. They have spiffy clothes, expensive boots, and snazzy hair-dos, but that doesn't hide who they really are. Rob Riley got Russ and Dee Fine fired because they exposed who the Rileys really are.

I hear Big Bob hasn't been terribly faithful to Ms. Patsy over the years. Like father, like son?

So Bob's "diddy" was a Grand Dragon? "Shazam!" says Gomer.

Bob would wear a white sheet regularly, but it might mess up his hair.

This might help explain why Bob Riley supports the use of public funds for private schools. Why doesn't he take money from public golf courses and use them to help golfers join country clubs?

I hear there is a new song climbing the country charts. It's called "Our Grand Diddy was a Grand Dragon," by Rob and Minda Riley.

Chuckles, you just made me blow milk out of my nose.

"The Family" must have been really upset about your story on Rob Riley and Liberty Duke because Ms. Duke has dark skin. Is she black?

No, Liberty Duke is not black. My understanding is that her ancestry is a mix of Filipino and white. My guess is that she's more white than anything.

I haven't seen anyone put all this together in a single place before. Threatcon'd.

I hope this is helpful to the public's understanding of the Riley faction or machine or whatever you want to call it. I think it goes to their sense of entitlement and the massive amounts of money the family made while Bob was governor.