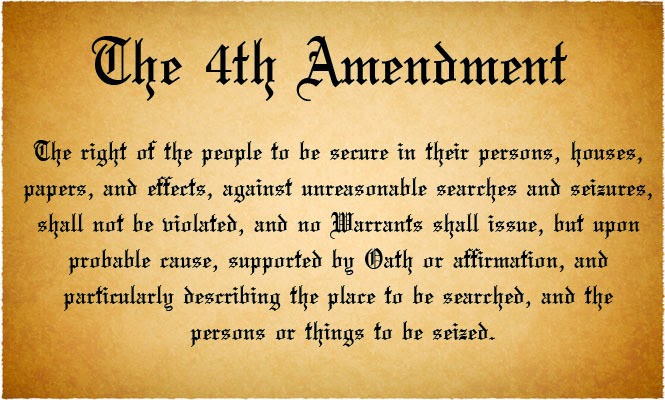 If Shelby County deputies arrested me inside my home without a warrant (or without a valid warrant)--and evidence we've seen so far suggests that was the case--they acted contrary to a landmark U.S. Supreme case on the subject of searches and seizures in private dwellings.

In the wake of unrest in Ferguson, Missouri; New York City; and other locales following the police-related deaths of Michael Brown and Eric Garner--plus the body-slamming assault on Indian grandfather Sureshbhai Patel in Madison, Alabama; the shooting of Walter Scott in South Carolina; and the unexplained death of Freddie Gray in Baltimore--citizens are questioning the actions of law-enforcement officials in public settings.

My experience shows that citizens also should take a critical look at officers when they are in a private setting--inside someone's home, perhaps yours.

We have addressed this issue several times in recent weeks. (See here and here.) But it is so important--especially in an age where law-enforcement officers seem to routinely violate the rights of citizens--that we would like to drive home a few more points.

Many Americans probably are familiar with language in the Fourth Amendment--that we are to be free from "unreasonable searches and seizures." The nation's high court, in Payton v. New York 445 U.S. 573 (1980), found that warrantless entry into a private home automatically runs afoul of that notion. From the Payton opinion:

It is a "basic principle of Fourth Amendment law" that searches and seizures inside a home without a warrant are presumptively unreasonable. . . . It is one thing to seize without a warrant property resting in an open area or seizable by levy without an intrusion into privacy, and it is quite another thing to effect a warrantless seizure of property, even that owned by a corporation, situated on private premises to which access is not otherwise available for the seizing officer.


The court then turned its attention to situations where people, not things, are being seized:

As the late Judge Leventhal recognized, this distinction has equal force when the seizure of a person is involved. Writing on the constitutional issue now before us for the United States Court of Appeals for the District of Columbia Circuit sitting en banc, Dorman v. United States, 140 U.S.App.D.C. 313, 435 F.2d 385 (1970), Judge Leventhal first noted the settled rule that warrantless arrests in public places are valid. He immediately recognized, however, that "a greater burden is placed . . . on officials who enter a home or dwelling without consent. Freedom from intrusion into the home or dwelling is the archetype of the privacy protection secured by the Fourth Amendment."


I was snatched from home, had pepper spray directed into my face, and hauled off for a five-month stay in jail (contrary to 200 years worth of First Amendment law) by an officer who never showed a warrant and never told me he had a warrant. To make matters even more dicey for law enforcement, prosecutor Tonya Willingham was ordered in court to turn over any warrants related to my case, and she said she didn't have any.

Tragically, Michael Brown, Eric Garner, Sureshbhai Patel, Walter Scott, Freddie Gray, and others were not safe from police officers while in public places. I was "fortunate" to only be roughed up and not killed. But I was not safe from a police officer while I was inside my own home--and substantial evidence suggests Officer Chris Blevins had no lawful grounds to be there.

It's undisputed that Judge Claud Neilson had no lawful grounds to issue the preliminary injunction that led to my arrest; such injunctions have been unlawful under First Amendment law that predates the end of the Revolutionary War.

We can't blame Officer Blevins for the actions of an incompetent or corrupt judge on the bench. But we can wonder why neither Officer Blevins nor Ms. Willingham could produce a warrant--when they had multiple opportunities to do so.

Blevins should know the findings in a landmark constitutional case such as Payton. And he certainly should know that Alabama statutory and case law prohibit an officer from entering a dwelling without stating his purpose for being there. (See Livingston v. Browder, 285 So. 2d 923, Ala. Civ. App., 1973). Video of my arrest, played in open court, shows that is exactly what Blevins did.

Blevins had every reason to know the constitutional protections of individuals inside their homes--and yet he plainly violated them.

Americans are right to be outraged by what happened in Ferguson, Missouri; New York City; Madison, Alabama; North Charleston, South Carolina; Baltimore; and so on. But they would be wrong to think that unlawful police force cannot be used against them. I know, for a fact, that it can be used against you--even when you are inside your own home.

We invite you take a look at the photo of Chris Blevins above. That's the face of police thuggery in Alabama.
Posted by legalschnauzer at 6:10:00 AM

I hope you can get a lawyer to nail the Shelby County people on this. Columbiana, Alabama is filled with arrogant judges and lawyers who prey on women and children in divorce cases. I think your case could knock them down a peg or two and give them a taste of "what goes around, comes around."

I would love to see a video of your arrest.

I have seen it, at my "resisting arrest" trial. Tonya Willingham, of the Shelby County DA's Office, should have it and should make it publicly available. I would love to have it all over YouTube.

The cop came in through your front door? And he didn't tell you why he was there? I find that hard to believe.

No, the cop came in through our garage door. And yes, he did not tell me why he was there until after he had entered our home, knocked me to a concrete floor three times, and directed pepper spray into my face. All without showing or stating he had a warrant--and even with a warrant, the contempt of court charge runs contrary to more than 200 years of First Amendment law, so the arrest was unlawful from the get-go.

Perhaps you aren't a regular reader. Here is one of several posts that can get you caught up:

@ 10:29, it's not just women and kids who get preyed on and it's not just Shelby County. The entire country has crooked judges and lawyers making back room deals. Both sets of lawyers know exactly how much money and possessions you have because you have to tell them about everything so it can be divided. Of course they continue the case until your bill is actually higher than you can afford, then you get the final divorce or custody orders. You should watch the divorce corp documentary. I watched it just last night and planned to look into some of the allegations. One man claimed he was put in prison because he posted a comment about the corrupt judge and lawyer on Facebook. Another was threatened with jail time.

Thanks for mention of the "Divorce Corp" documentary, @12:41. I was not familiar with it until you mentioned it. Definitely would like to watch it. Sounds like the whole divorce/family law gig is a little like shooting fish in a barrel. Here is URI for a video about the doc. Below that is URL for the documentary home page:

I would encourage my fellow Alabamians to read the Livingston v. Browder case that you link to in the article. It's pretty darned interesting stuff, and you never know when you might need to be aware of what the law holds. This seems to be the key finding . . .

"Importantly, in most circumstances, a person must make known his purpose and demand admittance before breaking into and entering the house of another to make an arrest. 5 Am.Jur.2d Arrest § 93"

I will second your statement, Chas. I was pleasantly surprised that Alabama has some fairly enlightened law on this subject.

Video of my arrest shows that Blevins did not do either of the things required of him: (1) He did not state his purpose for being there; and (2) He did not demand admittance; he just walked in. After being told to get out, he kept coming in.

Schnauzer, I don't know why you continue to expect Alabama judges, lawyers, and cops to follow the law. Not gonna happen, so you need to get over it.