Hearing on motion to vacate $3.5-million default judgment in Garrison case has been moved to June 4 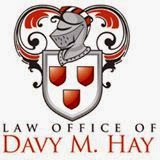 A hearing on a motion to vacate a $3.5-million default judgment in the Jessica Medeiros Garrison case originally was scheduled to be heard this week (May 20) in Jefferson County Circuit Court. But Judge Don Blankenship, on his own motion, postponed the hearing--with no explanation.

The motion now is set to be heard at 9:30 a.m. on June 4 in Room 600 of the Jefferson County Courthouse. Attorney Davy Hay, of Prattville, is representing me in the case.

Bill Baxley, of Birmingham, represents Garrison, the former campaign manager for Attorney General Luther Strange. Baxley also has represented a number of individuals in the ongoing grand-jury investigation in Lee County, with indicted House Speaker Mike Hubbard at its center. In at least one instance, Baxley co-represented a party in Lee County with Rob Riley, who filed a dubious defamation lawsuit that led to my five-month incarceration.

Blankenship's order postponing the hearing can be viewed below. At this point, I can only assume the postponement was due to a scheduling snafu:

Good luck on this, LS. If this case moves forward, I think it could uncover all sorts of interesting dirt.

I wonder if Jessica and Luther would like to sit for depositions in this case.

or checking to see how he should rule, given the political climate and your heightened profile.