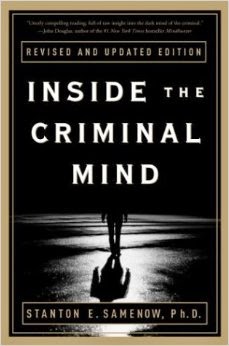 That becomes particularly disturbing when you research personality disorders and discover that the narcissistic and antisocial (more commonly known as sociopathy) disorders have much in common, especially their tendency to produce "victimizers."

Consider the insights of Stanton Samenow, Ph.D., a clinical psychologist in Alexandria, Virginia, and author of Inside the Criminal Mind. Samenow wrote an article for Psychology Today titled "Narcissistic Personality Disorder and the Antisocial Personality Disorder--A Lot in Common: There Is Little Difference Between the Antisocial Individual and the Narcissist." Here is how Samenow describes the tie that seems to most bind the narcissist and the sociopath:

The most important point is that people who are either antisocial or narcissistic are victimizers. Most likely, every reader of this column has unfortunately known a man or woman who is incredibly self-centered and self-aggrandizing, who is untruthful and cannot be trusted, who fails to see things from any point of view other than his own, and who is able to eliminate fear (and conscience) long enough to pursue any means to an end. Invariably, others are betrayed, deceived, and emotionally (perhaps financially) injured.


How else are narcissists and sociopaths similar? Both tend to lead chaotic lives, or create chaos for others, Samenow writes:

The narcissist, for example, "is uncomfortable in situations in which he or she is not the center of attention." The same is true of the antisocial person. The narcissist evidences "self-dramatization." People who are antisocial can also be quite dramatic. In fact, some count on drama to distract others from their real intentions. And some appear dramatic as they play out their perception that they are the center of the universe around which all else should revolve.


How do these traits present themselves in the Hubbard/Riley e-mails? The most obvious example comes when Hubbard states that he needs to fire four or five people "to really set the tone that new sheriffs are in town and in control." Hubbard, it seems, had picked out his victims, and the grounds for their dismissals apparently were . . . well, nonexistent. Hubbard's victims simply had parts to play in a twisted game that revolved around Mr. Speaker.

As for Riley, he didn't seem to have any qualms with Hubbard's plans. In fact, one gets the impression that Riley had taught Hubbard such tactics and was taking a certain pride in hearing about them.

What is the main difference between a narcissist and a sociopath? Samenow provides an intriguing answer:

Criteria in the (American Psychiatric Association's) DSMIV for Antisocial Personality Disorder (30l.70), include "failure to conform to social norms with respect to lawful behaviors as indicated by repeatedly performing acts that are grounds for arrest." Arrestability is not a criterion for diagnosing a Narcissistic Personality Disorder (30l.81). However, if you omitted the diagnostic labels and reviewed the other criteria for each of these "personality disorders," you might not be able to distinguish one from the other.


In simple terms, a sociopath is more likely than a narcissist to have a criminal record. That's ironic because Hubbard currently faces a  23-count corruption indictment--and Bob Riley and his daughter, Minda Riley Campbell, are named in the indictment.

For good measure, published reports have former first son Rob Riley working with Hubbard on a scheme to funnel Indian gaming funds through the Republican State Leadership Committee (RSLC) and back to a group designed to combat non-Indian gaming. Hubbard, Rob Riley, and anti-gambling zealot A. Eric Johnston all claimed to have no idea that the money came from gambling sources, and, not surprisingly, powerful evidence suggests they were lying.

Could Hubbard, the Rileys, and some of their cohorts all go down together in a steaming pile of criminality? It's possible, but we suspect the Rileys will save themselves by throwing Hubbard (and perhaps others) under the proverbial bus.

Stanton Samenow probably would not be surprised by such an outcome. Some warped individuals are better than others at getting away with criminal behavior:

The narcissist may not commit an act that is illegal, but the damage he does may be devastating. In fact, because the narcissist appears to be law-abiding, others may not be suspicious of him, leaving him freer to pursue his objectives, no matter at whose expense.

I have found that the main difference between the narcissist and antisocial individual, in most instances, is that the former has been shrewd or slick enough not to get caught for breaking the law.

Maybe the label "criminal" will officially stick to Hubbard and the Rileys soon. Hoping.

I'd say we get the leaders we deserve. Maybe we like being victimized.

I've read "Inside the Criminal Mind" and highly recommend it. Fascinating material.

Hubbard and Riley have white skin and call themselves "conservative," which means (more or less), "I won't let dark people get a leg up on you." That's all anyone really needs to gain political power in Alabama. Oh, and it helps to have a penis--or a powerful father who has a penis (ask Martha Roby).

The white, conservative voter doesn't care that much about criminality as long as a politician looks like him and vows (in code language) to protect him.

Thanks for a comment that made me laugh and made me think.

What about the politician whose powerful father does not have a penis? That's my concern.