Another Rogue Judge Bites the Dust in Georgia 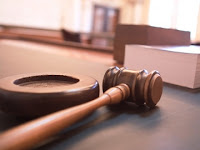 Our courthouses here in Alabama are infested with corrupt judges, and nothing ever seems to happen to them. That is not the case in Georgia.

Five Georgia judges have stepped down in the past three months amid investigations into alleged misconduct. The latest, according to reporter Bill Rankin at the Atlanta Journal-Constitution, is Superior Court Judge John Lee Parrott, who notified Governor Nathan Deal that he was resigning.

Georgia has a judicial-oversight board that must have some teeth. In Alabama, we have a Judicial Inquiry Commission (JIC) that might as well not exist, for all of the "good" it does. From Rankin's article at the AJC:

In a court filing Monday, the state Judicial Qualifications Commission said it had been investigating allegations that Parrott "allowed the prestige of his office to advance his private interests."

The court filing did not provide any further details, and the agency's director, Jeff Davis, declined to comment.


Translation: Parrott is a crooked judge, he knows it, he got caught, and he's bailing out to mitigate his damages. This scenario almost never unfolds in Alabama. When our judges start stealing from the public, they keep right on doing it. That's a big reason our courts have to rank among the sleaziest in the country.

Parrott served in the Ocmulgee Circuit, but not any more. Rogue judges in Georgia have reason to be looking over their robed shoulders. Reports Rankin:

Parrott, 63, served as a judge in the eight-county circuit in central Georgia for 24 years. He was appointed to the bench in 1987 by Gov. Joe Frank Harris and handily won re-election four years ago.

Over the past few years, some of the most prominent members of the state's judiciary, including seven chief Superior Court judges, have stepped down while facing allegations of misconduct, bringing disorder to the courts. Because of the number of high-profile resignations, more people are filing complaints with the Judicial Qualifications Commission, according to agency records.


A judge who has been handily winning re-election for 24 years suddenly resigns? You can bet someone has got some serious goods on his robed butt. And at least one Georgia lawyer has the cojones to say this is a good thing:

The Judicial Qualifications Commission is bringing more transparency to the judiciary, which is good for litigants and the public, Atlanta lawyer Bruce Harvey said. "Judges have the ability to rule their little fiefdoms, whatever the jurisdiction might be, to their own personal satisfaction," Harvey said. "They think they're bullet-proof. But now we're finding that some judges have no robes."


What are the chances of an Alabama lawyer making such a brutally honest statement about judges in our state? You are more likely to see Sheryl Crow bear Karl Rove's love child. That's a disturbing image, to be sure. But it's not nearly as disturbing as what takes place in Alabama courtrooms every day.
Posted by legalschnauzer at 6:03:00 AM

I looked up the court records and I noticed the lengthy court battle my late mom went thru, I checked the judges name and guess who the judge was? Judge Nix! Yup, the same judge who had those women in his lap and flicked them on the butt afterwards! When I saw the name I thought to myself, glad you were busted Nix.

Speaking of a judge using his prestige to advance his private interest, former Jefferson County Circuit Judge Sonny Ferguson doesn't hesitate to do the same.
Ferguson had a second home built on Lake Highland at Oneonta about 4 years ago. Ferguson failed to report the improvement of the property to the Blount County Tax assessor.
When construction of a house is completed, the homeowner is required to report this improvement, which increases the value of the property, to the county tax assessor.
Ferguson got away with just paying taxes on the unimproved lot which was valued in the $70's. A vigilant citizen finally brought this to the attention of the tax assessor. Sonny Ferguson had been cheating the government out of about $1400/year.
Ferguson was sent a notice from the tax assessors office demanding back payment and penalties. According to Blount County Tax Commissioner Green, Ferguson asked him "Isn't there something we can do about this?"