Abramoff Confirms That He Helped Turn Alabama Into a Political Cesspool 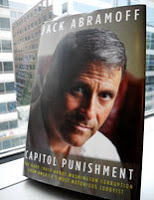 Republican felon Jack Abramoff has written a new book that appears to be long on titillation and short on details. "Casino Jack" seems to pull more punches than "Smokin' Joe" Frazier ever threw.

But while withholding more evidence than he provides, Abramoff confirms our worst fears: He helped soil our democracy in a way that almost certainly is unprecedented--and Alabama was one of his prime playgrounds.

How did he do it? Mainly by playing conservative Christians for fools.

The book is called "Capitol Punishment: The Hard Truth About Washington Corruption from America's Most Notorious Lobbyist." And after reading it, even the least rational Alabamians are likely to understand the following:

* Bob Riley rose to the governorship on a wave of GOP criminality;

* Don Siegelman, indeed, was targeted for a political prosecution--partly to assuage Abramoff's clients, the Mississippi Band of Choctaw Indians;

* Milton McGregor was targeted for a political prosecution in the ongoing Alabama bingo case--again to protect the Mississippi Choctaws.

The big loser in Abramoff's book, however, is the U.S. Department of Justice. We learn that the DOJ uncovered only a fraction of the criminal actions connected to Abramoff--or perhaps we should say the department acted on only a tiny portion of what it uncovered. In fact, the Abramoff "prosecution" now looks mostly like an exercise in political damage control--one that, so far, has helped protect Bob Riley and his henchmen in Alabama.

Most importantly, Abramoff indicates that the DOJ remains a dysfunctional mess under Barack Obama, with enough embedded Bushies and spineless Obamaphiles on the loose to pull off a charade like the Alabama bingo case.

In a sense, "Casino Jack" is at the heart of a story about simple mathematics. Mary Orndorff, of al.com, explains the numbers for us:

Jack Abramoff helped his Indian gaming clients in Mississippi protect $400 million in annual revenue by spending $20 million of their money to defeat gambling expansions in Alabama, the convicted former lobbyist wrote in his new book.

Abramoff spent 3½ years in jail after pleading guilty to corruption-related charges, including bilking the Mississippi Band of Choctaw Indians and others out of millions of dollars and bribing public officials in Washington, D.C.

The Choctaws, it turns out, made a pretty good investment in "Casino Jack." At least that's what Abramoff thinks--and he clearly doesn't give a damn about the lives and principles that were trampled along the way:

[Abramoff] said there were three main threats to his client: then-Gov. Don Siegelman's proposed lottery; dog track owner Milton McGregor's efforts to add gambling machines at his facilities; and the planned casino expansion of the Poarch Band of Creek Indians.

"Over the course of almost five years of waging this battle, we saved Choctaw's gaming market--which provided them with over $400 million a year in revenue," Abramoff wrote. . . . "It cost the tribe approximately $20 million to wage these battles, but the returns were worth it to them," he said. "Chief Martin called us the 'best slot machine' they had, and he was not exaggerating."

How is that for irony? Republicans are always touting "market solutions" to most any problem. But when the Choctaws were afraid to compete on the open market, GOP slime balls gladly turned to criminal acts in order to undermine possible opponents.

Abramoff devotes only four pages to his activities in Alabama. But Orndorff cuts to the chase about the GOP scheme in the Heart of Dixie:

The heart of the scheme was stealth--funneling money from gambling interests in Mississippi through nonprofits and into anti-gambling groups to help defeat the competition across the state line.

A 2005 investigation by the U.S. Senate Indian Affairs Committee revealed documentation of the payments that Abramoff routed from the Mississippi Choctaws into Alabama. For example, the Christian Coalition of Alabama accepted $850,000 from the Americans for Tax Reform to help fight video poker legislation in 2000; and another $300,000 went from the anti-tax group to the Citizens Against Legalized Lottery, which was formed in 1999 to defeat Siegelman's lottery plan.

Abramoff wrote that conservative activist Ralph Reed, whom he enlisted to help on the Alabama anti-gambling campaign, didn't want his "co-religionists" to know the operation was financed with gambling money.

"It was obvious to me that the only way to stop Siegelman, MacGregor (sic) and the Poarch Creeks was to organize the Christians," Abramoff wrote. "Ralph could do this in his sleep."

Citizens Against Legalized Lottery, by the way, morphed into Citizens for a Better Alabama (CBA) in 2001 and played a leading role in fighting the Sweet Home Alabama plan that would have brought legalized, regulated gaming to our state. CBA is led by A. Eric Johnston, a shadowy Birmingham lawyer who made a failed run for the Alabama Supreme Court in 2010.

We can thank Jack Abramoff for confirming what many of us have suspected for some time: A. Eric Johnston's group is not really based on a moral objection to gambling; it's designed to protect Mississippi gaming interests.

Abramoff said he "war-gamed" the Alabama strategy with his partner Michael Scanlon, who also pleaded guilty and was sentenced to 20 months in prison.

The book does not mention the financial donations that Scanlon made to Republican groups and PACs that in turn made donations to Siegelman's anti-lottery Republican opponent, Bob Riley. Scanlon, who worked for Riley briefly in Congress in 1997, never made a direct personal donation to Riley. But Scanlon's public relations consulting firm gave more than $650,000 during that election cycle to four entities that contributed large sums to Riley's campaign.

It must have been hard for al.com to publish those words, given that its news outlets have been among Riley's biggest cheerleaders.

Jack Abramoff clearly knows way more about Bob Riley and other Alabama bad actors than he is revealing in his book. The U.S. Department of Justice apparently is such a corrupt mess that it can't even begin to get at the truth.

Abramoff was featured on 60 Minutes Sunday night, in a piece titled "The Lobbyist's Playbook."  The segment largely ignored Abramoff's actions in Alabama, but it provides important insights into our broken democracy. The piece, reported by Lesley Stahl, is recommended viewing:

The U.S. Department of Justice apparently is such a corrupt mess that it can't even begin to get at the truth.

Ralph Reed should be in prison rather than tweeting obnoxious,gratuitous little tweets about the precentage Dems that attend church- for using this instument along with that other College Republican ---Norquist anybody--- to launder money.

What the wise people above me said. Abramoff's Indian Gaming shenanigans are but the tip of the iceberg. His guys fucked me at Florida East Coast with the Enron Broadband Services thing long before I returned to Alabama. Riley & company profited from both episodes & I was on the losing end of the stick twice. I won't be suckered again. Background checks aren't just for employers. They are for employees too. Know who your new boss really is before you go to work.

I remember putting a picture of Abramoff in handcuffs above my desk & telling James Hillman Griggs at the State Lands Division about how I got fucked at Florida East Coast & was glad to be working for a state agency that had the power to regulate these big companies. He got very quiet, asked me to take the picture down & walked out of the room. Should have known something wasn't Kosher with Bob Riley's gang right then & there, but like a fool, I worked for them for another year.

So now, Bob Riley's hearing is tomorrow to see whether or not he should testify at the next bingo trial. Strange doesn't want it to happen due to the fact of some of the questions Riley will be asked. Does Strange have the authority to represent Riley now?