The Cars Make a Welcome Return to the Music Fast Lane 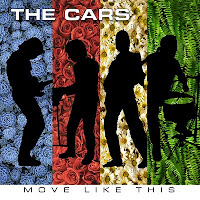 We are overdue for a musical interlude, and what better time to get back in the rhythm than with the return of America's premier New Wave band?

We are talking, of course, about The Cars, who turned out a string of hit singles and albums from 1978 to 1987. The four surviving members of The Cars have reconvened and will release Move Like This on May 10, their first new album in 24 years.

Sadly, this will not be a complete Cars reunion. Bassist Benjamin Orr died of pancreatic cancer in 2000 and has not been replaced in the lineup. Orr provided lead vocals on some of The Cars biggest hits, including "Drive," "Just What I Needed," and "Let's Go."

Two videos already have been released for Move Like This, and they show that Ric Ocasek, Elliot Easton, Greg Hawkes, and David Robinson still can produce the classic Cars sound. Ocasek, who writes almost all of the band's tunes, still has a great way with a cracking riff, a memorable melody, and off-center lyrics.

"Blue Tip," the first single from Move Like This will instantly transport you back to 1982:

Some critics might claim The Cars haven't grown in 24 years, that they sound much like they did before. But it's fine with this critic if The Cars mine familiar territory, as they do with "Sad Song." What's wrong with The Cars sounding like . . . The Cars?

We can't leave this subject without enjoying some classic Cars. Here is the band from a 1984 concert in Houston, with "Just What I Needed," their first U.S. single. That's Ben Orr on lead vocals:

Here is one of our favorite Cars' LP cuts, "It's Not the Night" from Heartbeat City, which has to rank among the best albums of the "Big '80s." Ocasek sang lead on probably 70 percent of The Cars' songs, but Orr handles the lead here.

Ocasek clearly is fond of his late bandmate. How did The Cars decide who would sing lead on certain songs? Ocasek has said in interviews that "if a song needed a good voice, it should be Ben. . . . If a song had a lot of melody and needed a good voice, I would say, 'Ben should sing this one.'" One such song was "It's Not the Night." Enjoy:

Funny, I just read about this new album earlier today. I've heard the new single a couple of times on the radio but didn't realize it was new, just figured it was from the last album which I never listened to. So I looked it up today and found out about the new album.

Nice to hear the nice things about Ben Orr. I didn't realize until seeing them in concert that he was lead singer on half their hits, or maybe even more than that.

I didn't realize either how many of the hits Orr sang. His voice and Ocasek's voice sound a lot alike, to my ears, although Orr probably is more of a pure singer. Good to see them doing new music.

Love The Cars. Not bad for a group of musically inclined conservatives. Music crosses all party lines - the universal language.

The Cars are conservatives? I'll be darned, I have never heard that. Still love their music.

I don't let Ted Nugent's views keep me from listening to his music. Or Johnny Ramone's. Fortunately I don't have to worry about that very often because there don't seem to be all that many conservative rockers. Unlike what you find in the country music aisle. :)

Where that problem occurs much more often is when you're a sports fan. Baseball and football players appear to be a lot more conservative. But I still watch 'em anyway.

Or sometimes they're just completely nuts. Roger, you'll like this one from the old hometown paper:

I saw where Mendenhall is getting them stirred up with his Tweets. Did he play at U of I and go up against Mizzou. Tigers have had pretty good luck with the Illini lately. When I was in school, during the Onofrio years, we couldn't beat lousy Illinois teams to save our lives. We'd beat people like Alabama, USC, and Nebraska, but lose to Illinois and Kansas. Uncle Al was a good man, but his teams were crazy.