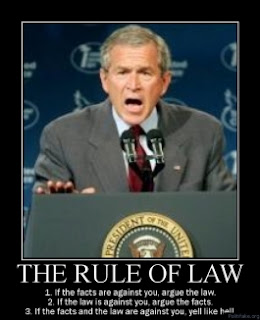 When you start a blog about corruption in our justice system, you know you aren't getting into the "fun and games" side of the cyber world. We try to lighten the mood with the occasional post about rock music, Scrubs, or LOL Cats. But as we approach our fourth anniversary here at Legal Schnauzer, there is no escaping the serious nature of our subject matter.

How serious is it? Based on a recent cover story in Time magazine, it might be more serious than we thought. Western civilization, it turns out, hinges to a great extent on the kind of stuff we write about. If that's the case, our little corner of the blogosphere could be seen as a sign that western civilization isn't in such great shape. And in the weeks ahead, we will present a series of posts that show things are getting worse instead of better for one of our society's fundamental pillars.

Which pillar is that? A Harvard historian lays it out in "Are America's Best Days Behind Us?" the March 14 cover story in Time. Here is how reporter Fareed Zakaria puts it:

The Harvard historian Niall Ferguson, who has just written a book, Civilization: The West and the Rest, puts things in historical context: "For 500 years the West patented six killer applications that set it apart. The first to download them was Japan. Over the last century, one Asian country after another has downloaded these killer apps — competition, modern science, the rule of law and private property rights, modern medicine, the consumer society and the work ethic. Those six things are the secret sauce of Western civilization."

We try not to take ourselves, and our blogging endeavor, too seriously. But reading that quote stopped me in my tracks. Legal Schnauzer, at its core, is about "the rule of law and private property rights," as experienced by my wife and me. After all, our journey through the cesspool of America's justice system started from our efforts to protect our private property rights against encroachment by a neighbor with a lengthy criminal history. And that evolved into a major struggle--one worthy of being chronicled in a blog--only because judges and lawyers repeatedly violated the rule of law.

In our own small way, we are showing that one of the building blocks of our society is eroding--and might be on the verge of crumbling if it isn't restored soon. Thankfully, we are not alone in our efforts to sound an alarm. Other reporters are covering similar territory, and we frequently reference their work--folks like Scott Horton, Andrew Kreig, Larisa Alexandrovna, David Fiderer, Brad Friedman, Lindsay Beyerstein, Joseph Zernik, Jason Leopold, and others. We also report on the actions of the real heroes in this, whistleblowers such as Alabamians Dana Jill Simpson and Tamarah Grimes.

We often have harsh words for lawyers. But the real villains here, in our view, are judges. Yes, judges are lawyers, but they are supposed to be the elites in the field. All lawyers are "officers of the court," but judges are public officials--the ultimate arbiters who are paid with public tax dollars and take an oath to uphold the law for all of us.

Our blog already has shown that quite a few judges fail miserably in this endeavor. In fact, we've shown that judges set the tone for a justice system that is riddled with corruption. In our view, many lawyers probably would behave honorably if they knew such behavior was expected and rewarded. Instead, they know that, in order to survive in their chosen field, they must grapple in a mud pit created by sleazy judges--with the assistance of partners at major law firms.

In a series of upcoming posts, we will show that a grim situation is worsening. In our realm, we've seen ample signs that the rule of law is in danger of flat lining. And this is not just about the legal travails that Mrs. Schnauzer and I are facing.

Yes, there are new developments on our personal legal front, and we will be reporting on those. But we will be examining the cheat jobs that other citizens have experienced in court. They will cover cases in both state and federal courts. Some are from Alabama, some involve other states. All reflect the dangers that loom when we allow judges to operate without accountability--and that's pretty much the system we have now.

Our reporting will show that judicial corruption is not just about political ideology. It involves judges who were elected or appointed as Republicans and those who rose to the bench as Democrats. This is not so much a story of right vs. left as it is elite vs. mainstream. In every case that we've seen, those with money and power have received unlawfully favorable treatment in court. The victims, in some cases, are men--and in many, they are women. Among those who have been caused to suffer are children.

Who are the most despicable among us? When you have finished reading our upcoming posts, I think you will decide it is those powerful parties, lawyers, and judges who--because of their greed and lust for "victory"--have caused significant harm to children.

While judicial corruption is a bipartisan issue, we can't let this matter pass without pointing out the particularly ugly damage being inflicted on our society by the right wing. We can see this by examining all six of Western civilization's "killer apps," as outlined by Harvard's Niall Ferguson. In what kind of shape do we find them?


* Competition--From the theft of elections to the attempts to bust unions, the right wing seems to be doing its darnedest to stamp out competition.

* The Rule of Law and Private Property Rights--We've already shown that this one is in trouble.

* Modern Medicine--The right wing long has been trying to keep women from receiving a full range of medical care. And remember George Bush's efforts to hinder stem-cell research? Who knows how much that has set back the effort to develop new treatments for major illnesses?

* The Consumer Society--Best I can tell, most Americans are more than happy to spend--especially the American I'm married to. But with the income gap exploding, what kind of spending power does the middle class have?

* Work Ethic--Productivity figures indicate Americans still have a collectively powerful work ethic; we are among the most productive people on the planet. But as the Scott Walkers of the world continue to chip away at worker rights--and as Mrs. Schnauzer and I can tell you, most of us already had little protection in the workplace--how long will that work ethic hold up? How long will Americans continue to bust their fannies only to see the vast majority of income growth go to the wealthiest among us?

At the risk of sounding like an alarmist, I would say all six of our "killer apps" are showing signs of needing upgrades. The "rule of law and private property rights," as we will be showing soon, might already be on the endangered list.

Great column, Roger, and I'm honored to be mentioned on your list. You are at the national forefront of these vital reform efforts. Long ago, those who created these wonderful freedoms and rule of law had no guarantee of success either. Instead, their more likely fate was retribution. Keep up this great fight!

Remember, the nihilist Karl Rove has had 8 years of injecting his version of reality into the court system. So good luck.
-
In a court brief in the detention case of Yaser Esam Hamdi the Bush Justice Department argues against a judge’s decision that Hamdi, a US citizen, must be allowed representation by a lawyer.

You made a difference.