Chamber of Commerce Thuggery Comes As No Surprise 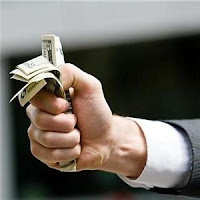 Reports last week that the U.S. Chamber of Commerce had engaged in a campaign to sabotage its political opponents were not a surprise here at Legal Schnauzer headquarters.

Birmingham is our home base, and Alabamians have seen the results of the chamber's underhanded tactics for 15-plus years now. In fact, a strong argument could be made that Alabama has felt the impact of the chamber's unlawful actions more than any other state--and the corporate sleaze has seeped into our own household.

It's probably fair to say that the influence of the U.S. Chamber of Commerce played a key role in the workplace cheat jobs my wife and I have experienced--all because I dared to write a progressive blog focusing on judicial corruption in Alabama. I was unlawfully terminated from my job at the University of Alabama at Birmingham (UAB), and my wife was cheated out of her job at Infinity Property and Casualty.

Evidence strongly suggests that we were targeted by people with ties to the Alabama Republican Party, which has been heavily influenced by the U.S. Chamber of Commerce and its local affiliate, the Business Council of Alabama (BCA).

So were we surprised to learn that the U.S. Chamber and its minions had tried to harm political opponents by gathering information about their spouses, children, and personal lives? Not at all. In fact, we would expect nothing less from the corporate forces that have brought untold corruption to Alabama.

We were not surprised by a USA Today article outlining the chamber's efforts to distance itself from the sleazy plan. We have learned from harsh experience that individuals who are cheaters also tend to be liars.

Many Americans probably associate Karl Rove's rise to power with Texas. But the GOP strategist did not become a national figure until he came to Alabama in the 1990s and, with the help of the BCA's Bill Canary and massive amounts of dollars from the U.S. Chamber, turned our state courts from Democratic to Republican control.

Now it is commonplace for large jury verdicts against corporate entities to be overturned in Alabama appellate courts. Perhaps the most famous such case involved ExxonMobil and a $3.6-billion judgment for fraud. The most recent came about a month ago when the Alabama Supreme Court overturned a $3.2-million judgment in a medical malpractice/wrongful death case against the Health Care Authority of Baptist Health.

On what grounds did our state's high court overturn the jury verdict? It said Baptist Health enjoyed state immunity because it had developed an affiliation agreement with . . . UAB. Isn't that interesting? The same public university that fired me is trying to help private facilities bypass accountability for gross medical negligence. This is a university that rakes in more than $400 million a year in federal funds and still discriminates and violates the public trust with impunity.

Corporate forces cheated my wife and me out of our jobs because I chose to exercise my First Amendment rights and start a blog that tells the truth about the rampant corruption in both state and federal courtrooms in Alabama, focusing heavily on the notorious Bush-era prosecution of former Democratic Governor Don Siegelman. Similar forces now are on the attack against others who would dare tell the truth.

ThinkProgress is one current target, and here is how it describes the chamber's scheme:

ThinkProgress has learned that a law firm representing the U.S. Chamber of Commerce, the big business trade association representing ExxonMobil, AIG, and other major international corporations, is working with set of "private security" companies and lobbying firms to undermine their political opponents, including ThinkProgress, with a surreptitious sabotage campaign.

According to e-mails obtained by ThinkProgress, the Chamber hired the lobbying firm Hunton and Williams. Hunton and Williams' attorney Richard Wyatt, who once represented Food Lion in its infamous lawsuit against ABC News, was hired by the Chamber in October of last year. To assist the Chamber, Wyatt and his associates, John Woods and Bob Quackenboss, solicited a set of private security firms--HB Gary Federal, Palantir, and Berico Technologies (collectively called Team Themis)--to develop tactics for damaging progressive groups and labor unions, in particular ThinkProgress, the labor coalition called Change to Win, the SEIU, US Chamber Watch, and StopTheChamber.com.

According to one document prepared by Team Themis, the campaign included an entrapment project. The proposal called for first creating a "false document, perhaps highlighting periodical financial information," to give to a progressive group opposing the Chamber, and then to subsequently expose the document as a fake to undermine the credibility of the Chamber's opponents. In addition, the group proposed creating a "fake insider persona" to "generate communications" with Change to Win.

Velvet Revolution, the progressive group behind the targeted StopTheChamber.com, said the Anonymous Network that supports WikiLeaks played a key role in unearthing the chamber plot:

In a plot straight out of Hollywood, this was exposed after Hunton and Williams hired the three firms to go after the Anonymous Network that had been supporting Wikileaks. The CEO of one of the firms, HBGary bragged in a February 5 article that he was going to take down Anonymous. Anonymous responded by shutting down HBGary’s web presence and extracting more than 40,000 emails from CEO Aaron Barr’s servers. Those emails disclosed not only the planned attack on Anonymous, but also the planned attack on us, which involved planting false documents, spreading disinformation, spying on our operations, cyberstalking, defamation painting us as a terrorist organization and/or a front group for the Unions.

Velvet Revolution makes it clear that it intends to take the matter seriously:

We have responded by notifying the FBI, spreading the word throughout the blogs, and talking with our lawyers about legal action. We have been posting articles about this on our StopTheChamber site, and will will be issuing a press release (Monday) calling for Congressional and Department of Justice investigations into these outrageous and unconstitutional activities.

That's the kind of aggressive approach progressive groups need to take against corporate thugs. We know because we've been dealing with such thugs for a long time here in Alabama.
Posted by legalschnauzer at 10:23:00 AM

Say, have you seen my democracy?

--Corporate forces cheated my wife and me out of our jobs because I chose to exercise my First Amendment rights and start a blog that tells the truth about the rampant corruption in both state and federal courtrooms in Alabama, focusing heavily on the notorious Bush-era prosecution of former Democratic Governor Don Siegelman. Similar forces now are on the attack against others who would dare tell the truth.--
You said a mouthful there. I think that a movie should be made about your life -- maybe you should get an agent and contact some studios... I'm only half kidding. Keep up the good fight, the truth will out in the end.

I read both your report here as well as Brad Friedman's accounts of his run-ins with the US CofC here:

My question is this:

Would the actions taken against you and yours, when combined with the latest CofC revelations possibly make a case for an ongoing Criminal Conspiracy on the part of the US CofC under the RICO Act?

We know who one of the law firms was involved in the ExxonMobil case--Balch & Bingham.
Were they also repping Baptist Health?

Ishmael:
That's a very good question. I don't pretend to be an expert on RICO--it's a complicated topic--but I think the answer to your question probably is yes, at least in theory. My understanding is that a RICO civil case requires one or two underlying criminal acts. The actions taken against me, my wife, Brad Friedman and others very likely qualify as a form of mail and/or wire fraud. I would not be surprised if other criminal statutes have been violated. RICO also can be a criminal action, but that would require a U.S. attorney with some guts to bring such a case--and I'm not sure such an animal exists in the Obama DOJ. Since Obama has taken a "look forward, not backwards" stance on Bush-era criminality, I would say a RICO lawsuit is the best chance for accountability. The folks at ThinkProgress and Velvet Revolution have good legal advisors, and I hope they are thinking along these lines. I don't think there is much doubt my wife and I have a valid RICO case, and we might indeed bring one.

Another good question. Baptist Health Authority was represented by Melton Espy & Williams and Slate Carter & Comer (both of Montgomery), plus Rosen Harwood of Tuscaloosa.