Karl Rove Returns to the Scene of the Crime

Protest posters figure to be prominent in Birmingham over the next few days. That's because Karl Rove is coming to town.

The former Bush White House strategist visits Birmingham on Tuesday for a pair of events--a book signing at a local mall and a speech at a private club. It will be a little like Osama bin Laden touring the former site of the World Trade Center.

Alabama is Ground Zero for the corruption of the U.S. Justice Department during the Bush years--all apparently orchestrated by Rove. Two bogus prosecutions of former Democratic Governor Don Siegelman, one in Birmingham and one in Montgomery, are exhibits A and B of Rove's handiwork.

But the man who is known as Turd Blossom has no qualms about returning to Alabama, especially when there is money to be made. Alabama progressives plan to greet him with protests.

Some Democrats who support former Governor Don Siegelman say they are working on mounting a protest of Rove’s visit.

“If you stand on the side of Gov. Don Siegelman, you’ve got a rare opportunity this coming Tuesday in Birmingham to add your voice in calling out Karl Rove as he continues his book tour,” said the Rev. Jack Zylman of Southside.

“While Rove is out on a book-signing tour, Gov. Siegelman is having to think about the fact that he is facing a possible return to prison,” he said in an e-mail alert. “Siegelman was convicted of something that was not a crime. So why are we letting Karl Rove travel the country signing his book and making millions while Gov. Siegelman goes to work each day not knowing if he will be sent back to prison? If the Don Siegelman case were truly investigated, it’s certain it would lead to Karl Rove.”

Rove is scheduled to appear at 3 p.m. at the Books-A-Million store inside Colonial Brookwood Village and at The Club at 6 p.m.

Protesters might have a hard time making their voices heard. The Club, known for its breathtaking view from atop Red Mountain, is a private facility. And my understanding is that the interior of malls generally is considered private property.

Hopefully, the protests will have an impact. For sure, plenty of these posters figure to be present: 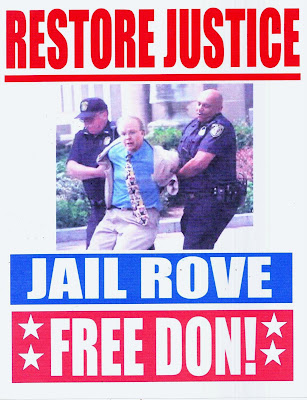