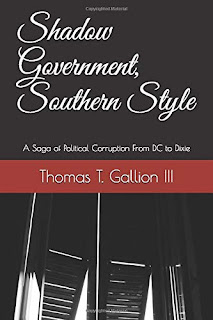 Tommy Gallion's Shadow Government  might be the most searing examination of Deep-South political corruption in the postmodern era. It is a work of considerable depth and breadth, deserving of its own review -- which we will endeavor to provide in an upcoming post. It also is "in the moment," filled with essentially breaking stories, largely unknown to the reading public here in the midst of election season,  Gallion set out to become an investigative journalist before settling into a long legal career, with a base in Montgomery, AL. Shadow Government shows that he has the searching eye and inquisitive mind of  a reporter.

Before delving into our review in a few weeks, we will produce a series of posts that examine some of the breaking news found in Shadow Government's pages. This is the third of those posts: (Part 1 is here; Part 2 is here;)


Doug Jones, once the "King of Conflicts" as a private attorney and now a U.S. senator, worked all sides of the fence in the political prosecution of former Democratic Gov. Don Siegelman and his codefendant, former HealthSouth CEO Richard Scrushy. How did Jones get away with it?

Doug Jones might style himself as a liberal friend of the working man. But in Tommy Gallion's book, he is a backstabbing SOB. He also has a tendency to pal around with, and cut deals with, oily Republicans. From Shadow Government, Southern Style:

During my investigation in that summer of 2018, I discovered one other unbelievable fact: Doug Jones, currently the junior U.S. senator from Alabama, appears to be connected to the political prosecution of Scrushy and Siegelman. The only witness against Don Siegelman was his top aide, Nick Bailey. The US Attorney's office had pressured Bailey with prosecution if he refused to testify against Siegelman. Bailey repeatedly told them he knew nothing against Siegelman, but they continued to pressure him to lie or face prison. Weak, scared, and knowing he wouldn't last three foggy mornings in prison, Bailey buckled. His false testimony convicted Siegelman, and by default, Scrushy. Here is the most stuning part o this scenario: Doug Jones was Don Siegelman's attorney, and Siegelman had reportedly paid him a $300,000 retainer. Shortly before the trial, Jones strangely withdrew from the case. (Note: At the time of this original posting, it was unclear if Jones returned the retainer, or any portion of it, to Siegelman. I followed up with Gallion, and he stated that, in a conversation about three weeks ago, Siegelman told him Jones did not return the retainer -- and did very little work on the case.) Then Jones immediately began representing Nick Bailey! This is such a blatant conflict of interest that there could be no debate on the issue. Jones was smart enough to allegedly trick Siegelman into signing a release so he could get out of the case. I was told by reliable sources that there is a tape recording of Nick Bailey stating that he was forced to lie, and his new lawyer Doug Jones worked  a deal with Leura Canary's to pull off this unscrupulous fix. The Rileys could not afford to have the tape released or the fact that Nick  Bailey was going to lie to the jury, so they brought in their buddy Doug Jones to help convict his former client, Don Siegelman.

In my more recent research, I found facts that sum up how disloyal these Cabal members are to their own political parties. Republicqns Karl Rove, Tom Donohue, Rob Riley, and Bill Canary formed a group to help elect liberal Democrat Doug Jones to the US Senate in his race against conservative Republican Roy Moore. Why? Doug Jones was US Attorney in Alabama from 1997 to 2001. During the George W. Bush administration, it was reported that Karl Rove later became close to Jones and funneled government-assigned jobs to him, because he had qllegedly helped The Cabal use Scrushy to convict Siegelman, Jones's former client.  Rove owed Jones because he and Jones had allegedly used Eric [Holder] to keep Rove from having to testify before a Congressional committee regarding the political prosecution of  Siegelman and Scrushy. If true, how tragic is Jones's unethical behavior when he represented Siegelman, obtaining attorney-client privileged information, while the whole time allegedly working with his close friend to take his own client, Siegelman, down? The big question is: Who paid Jones to represent Bailey?