Despite video that appears to show police clearly assaulting a 75-year-old protester in Buffalo, NY, we suspect prosecutors will struggle to get a conviction 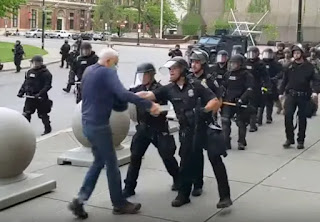 Two Buffalo, NY, police officers face second-degree assault charges for shoving a 75-year-old protester, causing the man's head to slam against a concrete sidewalk, drawing blood from his right ear and the back of his head. Officers Aaron Torgalski and Robert McCabe have pleaded not guilty to assaulting Martin Gugino.

What are the chances of the officers being convicted? Our review of New York law indicates it will be a tough case for prosecutors, even though the encounter was caught on a video that has gone viral and appears to show what many people would consider a clear assault. (More on that in a moment.)

Meanwhile, another protester says he heard someone -- apparently from the formation of cops -- shout "push him" as Martin Gugino stood before two officers at the head of the line. It is somewhat blocked by other noise, but I believe you can hear someone shout "push him" in the video, which is embedded at the end of this post.

What is likely to make this a tough case for the prosecution? We start with the relevant law, which is at New York Penal Law 120.05. Here are the two provisions, No. 1 and No. 12, that are likely to govern the Gugino assault case:

A person is guilty of assault in the second degree when:

1. With intent to cause serious physical injury to another person, he causes such injury to such person or to a third person;

12. With intent to cause physical injury to a person who is sixty-five years of age or older, he or she causes such injury to such person, and the actor is more than ten years younger than such person;


The video appears to show an officer purposely pushing Gugino in the chest, causing him to fall hard backwards. That seems to prove an intent to assault. But the law goes beyond that. As you can see from No. 1 above, it also must be proven that the officers intended to cause "serious physical injury."

How can prosecutors prove, that by shoving Gugino in the chest, the officers meant to cause him serious physical injury. Our research indicates that can be a tall task -- not only in New York, but in many other states, including Alabama, which has similar wording in its assault statute.

As for the allegation that someone egged on the two officers by shouting "push him," here is a report from WKBW in Buffalo:

Antonio Wells says he watched as long-time activist Martin Gugino was pushed to the ground by Buffalo police following a peaceful protest in Niagara Square Thursday.

Wells was recording on his phone in front of City Hall Thursday night. Wells was one of the few protesters who stayed after a peaceful protest and initially defied the 8 p.m. curfew and police orders to leave.

“He got up off the steps, walked up to them and said 'no — I’m not going to move' and that's when the police said 'push him, push him' and then they pushed him to the ground,” recalled Wells.

“So you're saying you actually heard the police say push him - push him?” asked [the reporter]. “I did hear that — yes,” replied Wells.


The WKBW story also addresses uncertainty about what led Gugino to appear before the police line:

There are a lot of questions surrounding why Gugino approached officers.

Watching a video, recorded by WBFO reporter Mike Desmond, you can see Gugino move his right hand up to the officer.

But wells doesn't believe Gugino had any intention of violence.

“He had a helmet in his hands and his phone. He wasn't reaching for anything. He was just standing there,” explained Wells.


Because of the video, this might look like a cut-and-dried case of assault, second degree. But we suspect it won't be easy for prosecutors. The officers' defense probably will be, "Yes, we intended to shove him, but we did not intend to hurt him." How could that be overcome? A conviction, we believe, is possible, but to understand how that could happen, it helps to look at New York case law. We will do that in an upcoming post.