As Donald Trump's business takes a pounding from coronavirus, $350 million in loans from Deutsche Bank are coming due, setting up a huge conflict of interest over a bank that is target of a DOJ probe

Donald Trump has a habit of hanging nicknames on his adversaries, such as "Sleepy" Joe Biden and "Shifty" Adam Schiff. Now it appears Trump is about to earn a nickname of his own -- and it's none too flattering. We will call him "The King of Conflicts." That's because Trump could wind up in the middle of perhaps the most gross conflict of interest in U.S. presidential history. A report from HuffPost and Yahoo! News explains:

In another tangled ethics situation for Donald Trump, the president’s Trump Organization is reportedly asking to postpone its loan payments to Deutsche Bank — which is being investigated by the Department of Justice to determine if it complied with anti-money laundering regulations.

The situation highlights the unique power of Trump as president to maneuver a deal for his business hurt by the COVID-19 crisis, particularly with a bank under investigation by his own administration.

Trump did not divest from his businesses when he moved into the White House as other presidents have done to avoid conflicts of interest. The current scenario is the “absolute nightmare that someone (ahem) warned about” when Trump took office, tweeted Walter Shaub, the former head of the U.S. Office of Government Ethics under both Barack Obama and Trump.


The loan issue looms as Trump plans to oust seven innspectors general, who serve as government watchdogs. That group includes Glen Fine, who had been designated to oversee distribution of funds from the $2.2 trillion coronavirus relief package. Is Trump removing the IGs so he can pilfer taxpayer funds to help deal with his personal business issues?

How tangled could this get? The outstanding loans from Deutsche Bank reportedly total about $350 million. And that's the same financial institution Trump's own Department of Justice (DOJ) is investigating. Could Trump be tempted to engage in a quid pro quo, encouraging the DOJ to go soft on Deutsche Bank in exchange for favorable handling of loans to his company -- at a time when Trump properties are taking a financial hit because of the coronavirus outbreak ?

Most Americans, of course, understand that the DOJ, led by Trump lackey William Barr, is part of the executive branch but is to operate independently of the White House, without interference from the president. Trump, however, has proven in the Roger Stone case that he does not let such niceties stand in his way. How tightly aligned is Trump with Deutsche Bank? Here is some perspective, from HuffPost/Yahoo!

The Trump Organization has been hit hard amid the coronavirus pandemic as consumers slash their stays in hotels and trips to golf resorts. The company has laid off or furloughed some 1,500 employees in several hotels, The Washington Post reported. As of Friday, 17 of the Trump Organization’s hotels and clubs were closed, according to the Post. The shuttered operations amounted to some $650,000 a day in lost revenue, the newspaper reported. Loans from Deutsche Bank, the Trump Organization’s biggest creditor, have reportedly been used for Trump’s Chicago Tower, the Trump National Doral Miami golf resort — which is now shuttered — and his Washington, D.C., hotel, which has closed its bar and restaurant, The New York Times reported. The loans are backed by a personal guarantee from Trump himself, according toThe Times. Deutsche Bank has loaned the Trump Organization some $2 billion since 1998, and there are currently an estimated $350 million in loans outstanding, the newspaper reported. Trump Organization representatives reached out to Deutsche Bank’s private banking unit in New York last month for preliminary talks to discuss new loan arrangements, according to The Times. Company officials are also talking to Palm Beach County about delaying payments of rent owed on land leased from the county, The Post reported.


Deutsche Bank executives have been worried for years that such a scenario might develop, reports David Enrich, who recently wrote a book about the bank called Dark Towers:

David Enrich, a Times business reporter who recently authored a book on Deutsche Bank, Dark Towers, told NPR that the bank has been “worried” about a situation like this.

Bank officials are now “forced to choose between doing what seems like it’s financially right for the bank and for its regulators, versus doing what’s right to protect the relationship with someone who has the ability to inflict enormous damage on the institution if he is so inclined,” Enrich explained. 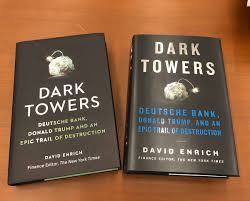 This “highlights for ... the umpteenth time here, the perils of having someone in the Oval Office who ... owns huge swaths of businesses and has refused to divest” from them, Enrich noted. “It a very tricky, messy situation.”


Deutsche Bank is currently being investigated by the Justice Department over whether it failed to report suspicious activity that may have been linked to money laundering, The Times and Reuters have reported. A bank whistleblower said that she flagged transactions involving Jared Kushner’s family business and Trump’s former charitable foundation — since closed amid an ethics investigation — for suspicious activity in 2016 and 2017. But the whistleblower said the bank never reported her suspicions to authorities. Trump and a representative of Kushner Cos. have denied any wrongdoing.

The bank, which was linked to a massive $20 billion money-laundering operation headquartered in Russia, paid millions of dollars in fines last year to the U.S. and Germany for other corruption and compliance violations. It’s also at the center of a court battle as the House of Representatives seeks to obtain its records on Trump’s loans.

Neither the Trump Organization nor Trump have commented on his business problems and possible debt rearrangement. But son Eric Trump, who helps manage the Trump Organization, told the Times: “These days everybody is working together. Tenants are working with landlords, landlords are working with banks. The whole world is working together as we fight through this pandemic.”