Question about the jailing of journalists catches Donald Trump AG nominee William Barr off guard, but here is the harsh reality of current U.S. law

Trump attorney-general nominee William Barr said at his confirmation hearing this week that he "can conceive" of jailing journalists "as a last resort." I am the most recent U.S. journalist to be incarcerated -- from Oct. 23, 2013 to March 26, 2014 -- and my five-month stay behind bars was the third longest in American history. It was, by far, the longest for a journalist in a purely civil matter, and it apparently was the only one involving an alleged violation of a preliminary injunction that was unlawful on its face--running contrary to more than 200 years of legal precedent.

In short, Judge Claud Neilson's arrest order in my case likely was the most unlawful First Amendment ruling in U.S. history.

The issue of jailing journalists hits close to home, and I've written extensively on the topic. Since Barr did a poor job of explaining U.S. law on the matter -- in fact, he seemed flummoxed by the question from U.S. Sen. Amy Klobuchar (D-MN) -- I decided, in the interest of clarity, to help him out. (And yes, it's scary that an incoming chief law officer in the United States knows so little about a profound constitutional issue that he needs my help.) From a report at Yahoo News:

During his confirmation hearing on Tuesday, attorney general nominee William Barr was asked by Sen. Amy Klobuchar, D-Minn., whether his Justice Department would “jail journalists for doing their jobs.”

Barr, President Trump’s pick for the nation’s top law enforcement officer, said he could envision a situation where a news organization or individual journalist could be held in contempt of court.

“I think that, uh, you know I know there are guidelines in place,” Barr said after a seven-second pause. “And I can conceive of situations where, uh, you know, as a last resort, and where a news organization has run through a red flag or something like that, knows that they’re putting out stuff that will hurt the country. There might — there could be a situation where somebody could be held in contempt.”


Barr is correct that contempt of court often is an issue that leads to the incarceration of a journalist. A judge might order a reporter to produce documents related to a criminal matter, or to avoid publishing an article that could affect national security -- and if the reporter refuses, he can lawfully wind up behind bars. Do I agree with that? No. Is it the law of the land? Yes.

Five of the six American journalists who have been jailed in the 2000s, had their freedom taken away based largely on a U.S. Supreme Court case styled Branzburg v. Hayes, 408 U.S. 665 (1972).

The sixth journalist is me, and my freedom was taken away for five months based on . . . nothing. No U.S. law supports it. In fact, a long line of U.S. Supreme Court and state high-court cases specifically state that a preliminary injunction in a defamation case is an unlawful prior restraint under the First Amendment--and yet, I spent five months in the Shelby County, Alabama, jail after Republican political figure Rob Riley and lobbyist Liberty Duke sought my arrest because I allegedly had violated a preliminary injunction in their defamation case, a civil matter that involved no criminal allegations of any kind.

Never mind that the material in question was not found to be defamatory at trial. That's because, under specially appointed judge Claud Neilson, there was no trial--only a hearing, with no discovery, no cross-examination, almost no evidence, no jury . . . well, you get the idea. It was, in fact, a joke--as I stated to the court that day.


The other five U.S. journalists to be arrested in this millennium, whether I like it or not, were lawfully arrested under Branzburg:

What separates my case from the other five that involve incarceration of journalists? Numerous differences come to mind, but the main one is this: Branzburg was the primary governing law in the other cases, and while I don't agree with the finding in Branzburg, it means that the other incarcerations probably were legal. Mine clearly was not legal, and even knowledgeable legal analysts who differ with me politically, agree on that.

The key issue in the other five cases involved efforts by journalists to protect confidential sources in criminal matters. Here is the core finding from Branzburg:

The First Amendment does not relieve a newspaper reporter of the obligation that all citizens have to respond to a grand jury subpoena and answer questions relevant to a criminal investigation, and therefore the Amendment does not afford him a constitutional testimonial privilege for an agreement he makes to conceal facts relevant to a grand jury's investigation of a crime or to conceal the criminal conduct of his source or evidence thereof.


Bottom line: If a U.S. reporter fails to appear and answer questions, per a court order in a criminal investigation, he can lawfully wind up behind bars. I suspect many Americans have no idea the First Amendment can become so squishy under certain circumstances --and William Barr did a poor job of explaining it. 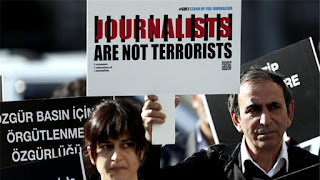 The lawful incarceration of an American journalist almost always involves criminal investigation -- and the reporter's effort to protect a confidential source. My unlawful incarceration, on the other hand, involved a prior restraint -- and except for matters of national security -- those almost always fall outside the law. That Alabama lawyer Rob Riley and Liberty Duke did not appreciate my accurate reporting (it's never been proven false or defamatory, as a matter of law) hardly is a matter of national security.


William Barr probably was interested mainly in obtaining a fancy title and more or less phoned it in for his confirmation hearing. He certainly did a poor job of educating the public. Hopefully, we have helped fill in some gaps.
Posted by legalschnauzer at 6:25:00 AM