Trump and Putin might have thought Helsinki summit was private, but intelligence agencies from Finland and Sweden likely reported it in almost real time 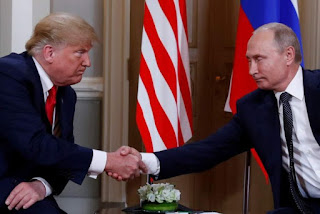 Donald Trump and Vladimir Putin might have thought their meeting in Helsinki yesterday was virtually private, but that almost certainly was not the case, reports a D.C.-based investigative reporter. In fact, Wayne Madsen writes that a transcript likely was provided to key western political and military leaders in real time.

An article at the subscription-based Wayne Madsen Report (WMR), dated July 16-17, carried the headline "No note takers at Helsinki summit, but Trump-Putin conversation will be fully wired." How so? Madsen provides the details:


Donald Trump and Vladimir Putin's one-on-one summit in Helsinki, which, like Trump's meeting in Singapore with North Korea's Kim Jong Un, was without advisers and note takers but with only translators, will be fully monitored in real-time with transcription provided almost immediately to select Western political and military leaders.

To ensure that any secret deals made between Trump and Putin or discussions about the U.S. investigation of malfeasance with the 2016 election are fully known to others, Finland's top-secret signals intelligence agency, Viestikoelaitos (VKL), the academic-sounding Signals Experimental Institute, has likely had the summit venue, the Finnish Presidential Palace (Presidentinlinna), located on the Helsinki harbor waterfront and overlooking Market Square wired for audio and video surveillance. Working with the Finnish security and intelligence service, the Suojelupoliisi (SUPO), VKL will have its ears extended on to the Putin-Trump summit. When it comes to Russia, an old enemy, Finland takes nothing for granted, especially when it involves a one-on-one meeting between the leaders of Russia and the United States. This is particularly true when the summit involves an American president whose loyalties to his own country and NATO are under heightened suspicion.


As a former intelligence officer in the U.S. Navy, Madsen has an insider's knowledge of such activities. He reports that Finland is sophisticated when it comes to signal intelligence:

The VKL, a department of the Finnish Air Force, is a third-party provider of signals intelligence (SIGINT) to the FIVE EYES cooperative alliance of the National Security Agency (NSA), Britain's Government Communications Headquarters (GCHQ), Canadian Communications Security Establishment (CSE), Australian Signals Directorate (ASD), and New Zealand Government Communications Security Bureau (GCSB). The FIVE EYES alliance also shares intelligence routinely with Germany, France, and NATO. During the renovation of the Presidential Palace, fully completed in 2015, new high-tech "security" systems should afford eavesdroppers all the surveillance of the Putin-Trump summit that is desired by the Finns.


Finland likely was not alone in following the Trump-Putin proceedings, Madsen reports. He was expecting Sweden to also be involved:

It will not be merely the VKL and SUPO that will have an ear on the Putin-Trump meeting but also the Swedish embassy, which is conveniently located near the Presidential Palace. The Swedish National Defense Radio Establishment or Försvarets radioanstalt (FRA), a Third Party agency for NSA and FIVE EYES, will also be listening in on the summit from its eavesdropping unit located on an upper level of the Swedish embassy in Helsinki. The FRA-run and NSA-equipped unit has been in use since the days of the Cold War.

Finland's President, Sauli Niinisto, will not have to worry about eavesdropping devices listening in on his dinner conversations or "pillow talk." Although the presidential office is located in the palace, Niinisto and Jenni Haukio, Finland's first lady, live at another location in Helsinki, the Mantyniemi official presidential residence.


The central parties to the summit, especially Trump (with his widely expressed disdain for NATO), might be clueless about the spying capabilities of those in the neighborhood. But they are not dealing with a bunch of rubes, reports Madsen:

Messrs. Putin and Trump may believe that their meeting will be strictly one-on-one. Ironically, their conversations will be known, in near real-time fashion and thanks to VKL and FRA, to key members of the Finnish and Swedish governments, German Chancellor Angela Merkel, British Prime Minister Theresa May, NATO Secretary General Jens Stoltenberg, Canadian Prime Minister Justin Trudeau, and even Australian Prime Minister Malcolm Turnbull -- all recipients of Trump's boorish bluster. In fact, Vice President Mike Pence and Secretary of State Mike Pompeo will only know what was said at the summit by nicely asking leaders like Merkel, May, or Trudeau to be cued in.

Trump believes he knows much more about the world by watching Fox News and reading the National Enquirer. Trump ignores intelligence reports and makes decisions based on his "gut feeling." Soon, Mr. Trump will discover that the Western intelligence agencies will provide his gut with a "feeling" -- a swift kick to the stomach.

Bravo to the Finns and Swedes. They don't mess around.

Wouldn't it be a hoot if Trump, during his two-hour love fest with Putin, admitted to collusion, obstruction, etc.?

I like to think Mueller has a transcript of the Trump-Putin discussion in his hands at this very moment.

What if the governments of Finland and Sweden basically saved our democracy?

Putin probably didn't care if someone was listening in on the talks. But Trump is such a doofus, he probably thought it was private.

I've read that Putin probably had his own people listening in on the talks, as a way to gather more information for blackmailing Trump.

That sound you hear is Robert Mueller cackling like a mother hen.

What a hoot if Trump, in talking to Putin, implicated Jeff Sessions and the rest of the Alabama Gang in collusion.

Oh, wait . . . if the transcript becomes public, Donnie T will simply try to walk it back by saying he "misspoke."