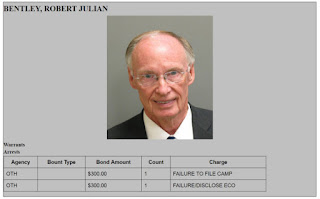 Most rational Alabamians probably concluded that former Gov. Robert Bentley was a corrupt, dishonest rube about the time he resigned in April 2017, after pleading guilty to two misdemeanors. If there is any doubt that Bentley is a loon, it should be erased by Bentley's words in a deposition, revealed this week.

What is the surest sign Bentley is so narcissistic and self-righteous that his visions of grandiosity form a disconnect with reality? My No. 1 choice is this: Audio evidence shows that Bentley delighted in massaging the boobs and exploring the nether regions of married senior adviser Rebekah Caldwell Mason, but he now says such behavior was not -- I repeat, NOT -- inappropriate.

If you have forgotten the contents of the Bentley audio, we have a transcript here, courtesy of Yellowhammer News. As for the deposition, we invite you to take a gander at these words from Bentley, on pages 176 and 177, and try not to spew. (The full deposition is embedded at the end of this post.) The questioning, from attorney Kenneth Mendelsohn, focuses on Bentley's divorce from his wife of 50 years, Dianne:

Q. Was the relationship between you and Rebekah Mason the reason for the divorce?

MS. MAYS: Object to the form.

A. It was one of the reasons, yes.

Q. And I understand you say that there was no consummation of your love, but Mrs. Bentley did not like the relationship that you had with Mrs. Mason?

Q. And she believed that as a married man, and certainly a man that had been married for right around 50 years, that having such a relationship with Ms. Mason was inappropriate?

Q. Do you consider the relationship inappropriate?

Bentley even struggles to admit he owed the people of Alabama an apology. He decides to play the "clueless oaf" card, a role for which he is particularly well suited. From pages 177-178:

Q. And there have been a couple of occasions where you apologized to the people of the state of Alabama. Do you recall those?

Q. What were you apologizing for?