Just two days ago, we asked: Does police dishonesty pose almost as big a threat to society as police brutality? We pointed to signs that law enforcement officials had lied in statements about the Laquan McDonald shooting in Chicago and in the eviction-related assault that left my wife with a shattered arm in Missouri.

New reports last night in the McDonald case suggest the answer to our question might be yes. Meanwhile, the free-lance journalist who brought video of the McDonald shooting to light says he is far from finished seeking details about the case via the Freedom of Information Act (FOIA).

Raw Story was among news sites reporting yesterday that still images taken inside a nearby Burger King on the night of the McDonald shooting show officers checking video from surveillance camera. Those are the same cameras from which the restaurant's manager said more than 80 minutes of video were missing.

Manager Jay Darshane said officers spent more than three hours at the restaurant that night, and the new images appear to support his story. Were the officers gathering evidence or tampering with evidence? The answer to that question is not clear, but we do know this:

* A police official originally had said McDonald lunged at officers with a knife, but video shows that did not happen.

* According to Raw Story, before McDonald’s family could even file a lawsuit, the city gave them a $5 million settlement on the condition that the family agreed not to publicly release the dashcam footage of the teen’s death. After suppressing the video for 13 months, the city received a court order to release the footage.

Does that sound like a police department that believes in transparency? Not exactly. But journalists are pushing for information anyway, led by Brandon Smith, who publishes the blog muckrakery! In an article yesterday at The Daily Beast, Smith said his efforts to shine light on the McDonald case are ongoing:

I’m the journalist who sued Chicago and won the release of the video that showed Laquan being shot to death 16 times on Oct. 20, 2014. But I’m not stopping there. With the help of attorneys, I’m continuing my Freedom of Information Act request of the city to release officer statements made to investigators, emails from city officials, and more. The public needs to know what as many as eight officers did immediately after the shooting, as well as how the department handled what should’ve been plainly seen as murder by one of its own officers that night.


Raw Story provided information about the minutes leading to the fatal encounter with police in Chicago:

Surrounded by officers and suspected of breaking into cars on October 20, 2014, Laquan McDonald, 17, was attempting to walk away from a group of Chicago cops when Officer Jason Van Dyke exited his patrol car. According to initial reports, McDonald was armed with a knife and lunged at Officer Van Dyke. Fearing for his life and the lives of his fellow officers, Van Dyke shot the teen in the chest out of self-defense.

But according to witness statements and police dashcam video, McDonald was walking away when Van Dyke opened fire. After McDonald had collapsed to the ground in a near-fetal position, Van Dyke continued firing his weapon until emptying his clip. As Van Dyke began reloading his gun, a fellow officer had to order him to cease firing at the dying teen.

McDonald’s autopsy revealed that Van Dyke shot him 16 times, including two bullets in the back, seven in his arms, two in his right leg, once on each side of his chest, and single bullets wounds to his right hand, scalp, and neck. Nine of the 16 entrance wounds had a downward trajectory. None of the five other officers at the scene fired their weapons.


What about the case here in Springfield, Missouri, where deputies brutalized my wife, Carol, and left her with a shattered left arm--as Greene County Sheriff Jim Arnott watched from a few feet away? We've shown that Arnott's first instincts were to lie and cover up--falsely claiming that Carol had assaulted a police officer and ordering her arrested and taken to the county jail. Carol was told that she faced felony charges and a likely $100,000 bond, and that only changed when X-rays showed her arm had been severely broken just above the elbow, suggesting she was the victim, not the perpetrator, of an assault. 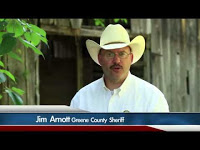 We've also shown that officers had no lawful grounds to be on the property that day because the eviction was unlawfully scheduled and was stayed by our Notice of Appeal filed the day before.

My guess is that the police dishonesty is just beginning in Carol's case. For example, we've seen evidence that officers concocted a claim that I had placed a 911 call, threatening any officers who attempted to evict us. I never made any such call, but comments on the scene that day indicate officers used their belief in such a "call" to justify acting like a SWAT team, pointing an assault rifle and multiple handguns at us as they burst into our apartment.

Scott Harrison, the deputy who drove Carol to jail, said he had heard the 911 call, and it had been traced to our phone and our apartment. That is impossible, but we will see what an investigation turns up.

Would cops lie to cover up their own misconduct--in Illinois, Missouri, or anywhere else? Here is video about the Laquan McDonald story that suggests a disturbing answer to that question:

Now THIS is why I come to this site...not to expose AM members. Excellent work LS! I think you can very quickly establish yourself as an advocate for change in police brutality if you focus on it. You've certainly got first-hand experience with it. Keep it up!

I think the McDonald case could wind up being one of the worst police corruption cases in U.S. history.

Wish I could blame this on a Repug, but Rahm Emanuel is leading this train wreck.

Now this is actual newsworthy journalism that needs to addressed

Have you read the stuff about Dothan police officers planting evidence? Check out the Houston County Reporter.

Yes, @3:38, I have read the article at Henry County Report, and I encourage others to do the same. I notice it has been picked up by several progressive Web sites--Raw Story, Alternet, etc.

Here is URL to the original article by Jon Carroll:

I agree with @11:59, and Chicago would be the perfect place for a massive case of police corruption.

AGENDA 21. The document has John Kerry's name on it over and over again. The planet is being cleaned up, to use words that are not exactly benevolent in the human being reality -- those that are not able to be slaves are to be destroyed in whatever fashion that can happen. FEAR PORN is the order for keeping the "People" in place for those that own "slaves". Carol and Roger have minds that are not able to be controlled so you must go - not multi-millionaires and definitely not obedient servants to the vile new order of world earth. Police or call the faction what it is - predatory. Wild animals don't do what is being done in the species "Homo Sapiens", and therefore, the degenerate are controlling the reality of earth life in the nature of "humans". Quite sick so stay hidden in the realm of this time. Until the planet is cleared of approximately ninety percent (90%), we are experiencing HELL. Shakespeare said that hell is empty and the devils are all here -- so keep away from the demons that are in control. Drugs have been given to far too many and therefore, the minds of crazies are what kills indiscriminately.

Be well Schnauzers and stay centered in the Sun Tsu Art of War!! still your friend, PP